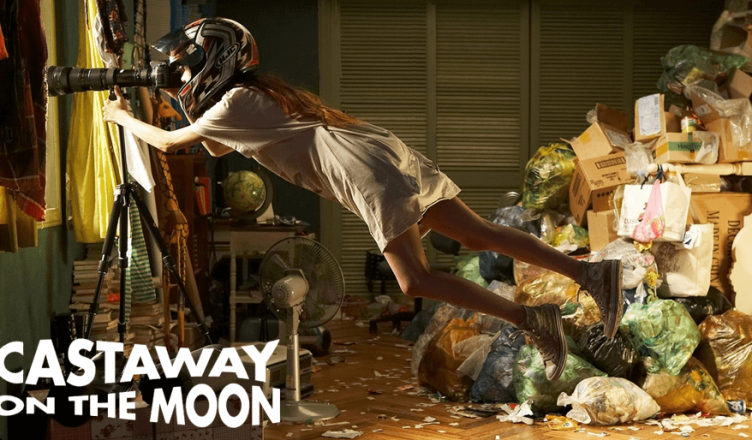 Tony, from Every Frame a Painting YouTube channel, has a visual essay about film comedy. He talks about how nowadays comedy films, especially those coming from Hollywood with their dependence on dialogue and close-ups are more like staged improv than a film. This way, they miss out on all the possibilities of the medium. Edgar Wright is a shining exception, as Tony points out, and his movies (that I love!) are a masterclass of how to do film comedy right.
Now, going back to the Asian cinema, – I have not seen that many comedies (few exceptions – Breakup Buddies, Kung Fu Hustle, 3 Idiots). Humour is difficult to translate, and gets literally “lost in translation”. But if most of the comedy comes from the visual expression, that makes it different (that’s why the silent era comedies are funny to most). It was a pleasant surprise to watch Hae-jun Lee’s Castaway on the Moon and see how he embraced the visual aspect of comedy.
In the film, we follow stories of two castaways – male and female Kim (a common last name in South Korea) and their tragi-comedic ways of dealing with alienating modern urban life. First, we meet the male Kim, who in the opening moment of the film tries to commit a suicide by jumping into Han river from a highway bridge in Seoul. But he fails to drown and ends up in an in-between deserted island, from which he cannot escape as he cannot swim. Eventually, he succumbs to his castaway life as a modern Robinson Crusoe and even starts enjoying it. Part of information comes form voiceover – the character expressing his thoughts. But most of the effective comedic moments come through visual – the film used editing techniques to make their punchlines much stronger and more memorable.

“Birds taste better than fish. Maybe evolution is a process of becoming tastier,” the male Kim.

When we’re about one-third in the movie, we meet the female Kim. She is a castaway in her own home, who hasn’t stepped out in years, living her life via online chats. Only two days in a year, during a Civil Defense drill when city stops to a halt, she opens her blinds and watches the outside world. And one of these days when she looks out, she sees the male Kim and decides to contact him.
This is a fun reversal – usually, the voyeuristic gaze comes from a male, and females are the ones who are “looked at” and need to look beautiful and cute (very common in East Asian cultures). In this case, the female has the gaze power and it is in her hands to make the first move to contact the male character. This gives her confidence that she otherwise did not have. And, of course, this “looking and being looked at” game provides a lot of comedic possibilities that the film uses.
Castaway on the Moon is a funny, quirky and intelligent film. A parody of modernity with realization of its inevitability. And sometimes, even in the alienated urban world, we can find a true connection.