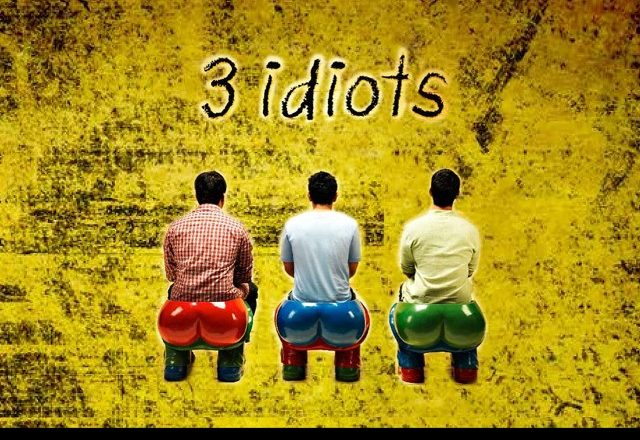 When “3 Idiots” hit the big screens in India, it broke all the box office records, and became the highest-grossing Bollywood film. It did very well home as well as overseas. In fact, it did so well it became the highest-grossing Bollywood film ever released in overseas markets. (Source: Wikipedia) This big-time hit was an introduction to Bollywood movies and to Aamir Khan for me. I can honestly say that “3 Idiots” swept me off my feet. I consider it one of the most surprising and rewarding cinematic experiences I have had, and I give it my highest recommendation.

The movie begins in an almost thriller-like manner: a character receives a mysterious call while his plane is taking-off. He stands up, and then falls immediately, presumably having a heart attack. The plane lands, and then all turns into comedy from there. The character, Farhan (Madhavan), stands up and runs away from surprised airport workers trying to aid him. Apparently he received a call from a former college classmate, Chatur (Omi Vaidya), who claims he found their long lost friend, Rancho (Aamir Khan). Farhan calls the other best friend, Raju (Sharman Joshi), and they rush to meet Rancho. He is not there, however, and Chatur has in fact gathered them only to gloat about his own achievements. He reveals that he really did find Rancho in Shimla. While the characters are driving through stunning landscapes, Farhan remembers the college years, and we get a glimpse of how the whole story started.

They all met at the Imperial College of Engineering, the number one university in the engineering field in India. Farhan’s fate as an engineer had been decided by his parents the day he was born. Raju always had good grades, and though he loves engineering, his main goal of studying is to get his family out of poverty. Because of this burden, he is always worried and in fear. They are both assigned to the same dorm room with Rancho. He is passionate about engineering, cheerful, and has very unconventional ideas and behavior.

“We were robots blindly following our professors’ commands. He was the only one who was not a machine,” Farhan muses.

Professors did not like Rancho’s “system-challenging” ideas. They much prefer students like Chatur, who crammed blindly and obeyed their authority. Due to his free-minded outbreaks, Rancho became nemesis to the college dean, Professor Viru Sahastrabudhhe, or “Virus” (Boman Irani) as students call him. Farhan is fascinated by Rancho from the beginning. Raju also warms up to him after a few dramatic events where they develop a very strong emotional bond (with each other and the audience). Meanwhile, a love story starts developing between Rancho and Pia (Kareena Kapoor), who to make things more complicated, is the daughter of Professor Virus. Both stories, the present and the past, develop with fast pacing, and are filled with surprise plot twists and events. It is hard to believe that the movie takes only three hours with all the things that happen there. Eventually, all works out well for our protagonists, and Rancho’s statement is proven right:

“Do not chase the success, follow the excellence and success will chase you, pants down”.

“3 Idiots” is a very straightforward jab at India’s higher education system. There is a lot in this film that students in India (and not only there) can relate to. It also addresses other very serious issues, like the student suicide rate fueled by all the pressure from studies and parent’s expectations that they are trying to fulfill. While the movie attacks the system, it is very much pro-education. On one hand, we can see it from Rancho’s story. I cannot go into details without revealing spoilers, but it is pretty much self-evident. On the other hand, there is a side story about Millimeter. He is from a poor family background, and cannot afford school, though he wants to get an education. He supports himself by running errands for students on campus – doing laundry, ironing, getting groceries, etc. At this point, his future seems to be destined to end something like Govind’s, Professor Viru’s valet, treated in an almost slave-like manner by the professor. This subplot addresses the issue of caste system and poverty. It shows that through education, people from different backgrounds can be empowered and get themselves and their families out of poverty.

A very interesting cultural reflection in the movie is how involved the family is in different decisions and problem-solving for students. When Professor Virus wanted to break up Farhan’s and Raju’s friendship with Rancho, he wrote letters to their parents. To solve the issue, the parents invited all the friends to their homes, and tried to convince Rancho to change his ways. The importance of family, and the deep respect of parents are shown throughout the film. Following the parents’ directions is a duty, and following duty is something rooted in Hindu tradition. The entire Bhagavad Gita discusses dharma, the cast duty that every individual must fulfill, no matter what the circumstances are. In the Bhagavad Gita story, the great hero Arjuna, legendary archer, is faced with the dilemma whether to go into battle or not. On one hand, he must do it, as he is of the kshatriya, or warrior cast. On the other hand, he would then fight against his uncles, aunts and beloved ones. He consults his chariot driver, who happens to be an incarnation of the god Krishna, as to what he should do in this situation. Krishna persuades him that his dharma is more important than anything else, and he must pursue it without question. Though the legend does not talk about family duty directly, it shows how important duty is in Hindu culture. The movie embraces the importance of family, but also shows limitations, and even danger in solely relying on traditional ways. It challenges the notion of listening to authority, like parents and professors, without question. It tries to bring a more modern worldview, leaning towards individualism associated with the Western thought. In this sense, it is a very pro-Western culture movie.

There are admittedly some flaws in the film. The major one for me was that when they found Rancho in Ladakh, five years after they finished studies, he had not married, nor had any relationship. Seemingly, he had not even kissed before Pia “attacks” him joyfully. The same goes for Pia, but waiting five years seems quite a long time, especially in a more traditional family in India, where “unwed” girls are a “burden” for family. (Nitpicking – in the end scene: where did Farhan and Raju come from? Pia came by scooter, Chatur by car, and they just appeared from nowhere) All characters had pretty clearly defined characteristics of “good” and “bad.” The movie is very categorical about it, though it does work out well in this case.

However, these minor details have no influence on the overall impact of the movie, and the impact is significant. It’s a wonderful cinematic experience, very well shot, with beautiful colors, amazing landscapes, and a very smooth experience for viewers (movies that use flashbacks often stumble on this aspect). The soundtrack is superb, from the soft “Behti Hawa Sa Tha Woh” in the beginning, the super fun “All Izz Well” song and dance sequence, the emotional “Give Me Some Sunshine,” and the “Jaane Nahin Denge Tujhe” that makes me cry every time. “Zoobi Doobi” is also a very fun song and dance sequence that mocks Bollywood clichés (with, I assume, intended soft self-irony, using such a clip to mock Bollywood in a Bollywood movie). Acting is great from all main characters, and the emotional connection with the audience is guaranteed. I have to admit, I have never cried during a film as much as I did watching this one. It has very universal appeal, and anyone can find a favorite part or message for them. Especially for those who have not seen any Bollywood films before, it is a good one to start with.

The movie has already been remade in Tamil as “Nanban.” There might be a remake in Hong Kong with Stephen Chow (“Shaolin Soccer”, “Kung Fu Hustle”), a Hollywood remake (of course), and even an Italian remake. (Source: Wikipedia) If they do come through, it will be very interesting to watch and compare the approaches that the different cultures will take with this film.