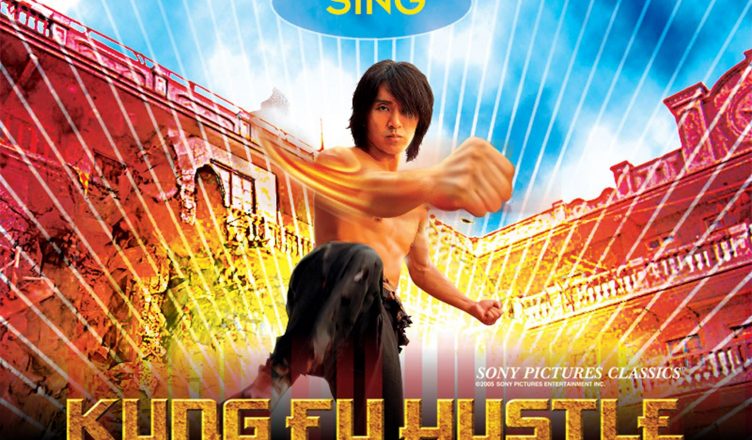 “Kung Fu Hustle” is a world famous, highly acclaimed kung fu comedy by Stephen Chow. It was released after the success of a similar Chow comedy, “Shaolin Soccer”. Both movies are parodies of the mass produced kung fu action films that were very popular in ‘70s and ‘80s. More than simple comedy though, both are good martial art movies with some very entertaining fight scenes, including some of my personal favorites (which is no wonder, having Yuen Woo-ping as fight scene choreographer, who has worked on such films as “Kill Bill”, “The Matrix”, “Fearless” and “Crouching Tiger, Hidden Dragon”). Therefore, the films become parodies of themselves, which I think is intentional, and increases the value of film even more.

The action happens in a Cantonese-speaking town around the 1940s. The town is ruled by the notorious Axe Gang. A feared bunch, they are also sometimes fun, and even have their own dance sequence with axes. The only area of town the gang does not extend their rule into is Pig Sty Alley, an area too poor to be noticed. But their peaceful times end when two small time crooks, Sing (Stephen Chow himself) and Bone enter the scene pretending to be Axe Gang members in order to blackmail the tenants. The locals do not give in to this attempt though, and then the real gang shows up. The bunch of baddies is defeated by three martial art masters who live secretly in the Alley. While the Axe Gang leader is hiring assassins to kill these masters, we are shown the story of Sing. Apparently, as a child he was approached by an old weird tramp who sold him “secret” kung fu books. He also told the kid that he has the bone structure and Chi flow of a kung fu genius. He trained, and then tried to save a mute girl from bullies, only to discover he is not a kung fu master after all. Since then, Sing has held a grudge and thinks that doing “the right thing” will not get you anywhere in life. He joins the Axe Gang, and tries to destroy Pig Sty Alley with them. But in a critical moment, he realizes where his heart lies after all, and the true potential of “The Chosen One” is revealed.

“Kung Fu Hustle’s” style is very cartoony, with some over the top slapstick not usually seen in modern movies (imagine if “Who Framed Roger Rabbit” characters were all real actors). It is easier to accept the chosen visual stylistics if viewers try to catch the references made to different Western and Asian films and animation. They range from the Looney Tunes’ “Road Runner” to “The Matrix”, from classic wuxia to “The Shining,” “The Blues Brothers,” “The Godfather,” and many others (a comprehensive list in Wikipedia).

Going even further into the historical background, the “secret martial arts book” theme is used very often in kung fu movies (even in “Kung Fu Panda”), and has its roots in Chinese history. Legend says that one of the greatest military strategists, Zhang Liang, met an old, weird man when he was a kid. That man threw his shoe away and told Zhang Liang to fetch it. When the kid did that, the man asked him to put the shoe on his foot. Although being uncomfortable with this, the child obeyed. While walking away, the man said, “You can be taught, young man. Meet me here in five days at dawn.” Zhang Liang came five days later at sunrise to find old man already there. “Why are you late,” he asked. “I will give you another chance. Come five days later at sunrise.” The second time, Zhang Liang came before sunrise, and again found the old man there. He said the same as before, and gave him one last chance to come five days later. This time Zhang Liang came even earlier and the old man was not there yet. When he showed up, the man was pleased. “This is the way thing ought to be,” he said, and gave a book to the child. “Read this, and you will be teacher of kings.” The book was a secret military strategy book, “Grand Duke’s Art of War,” and Zhang Liang became a superb war leader. The book is a legend, and it was either lost to history, or perhaps never even existed. (Information from The Great Courses lectures by prof. Grant Hardy).

Besides being a comedy, “Kung Fu Hustle” is also a monument to the old kung fu film. It does make fun of these movies (while making fun of itself at the same time), but it also provides a comeback for many old wuxia action heroes. On smaller scale, it is also a testament to old-style neighborhoods that had a community feeling in them. The Pig Sty Alley is inspired by the director’s childhood memories of such neighborhoods in Shanghai. These kinds of places are quickly disappearing, being replaced by modern skyscrapers that will never have the same feel to them.

“Kung Fu Hustle” is a pleasurable and unpredictable mix of wuxia, cartoons and gangster films. Its frivolous mosaic of references, well choreographed fights, and marvelous soundtrack make it a very pleasurable experience. This movie is a crossroads of something old and something modern, resulting in a very interesting creation.