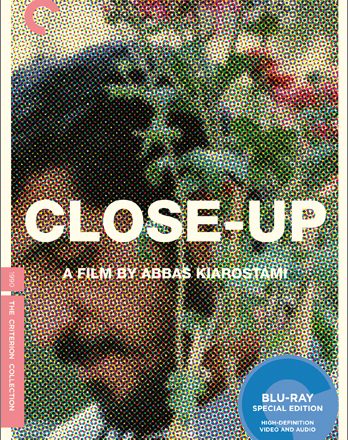 Close-Up (The Criterion Collection) on Amazon.

In the beginning of Close-Up, we are introduced to a charismatic journalist who is in a car with two policemen on their way to arrest an imposter. Almost every Kiarostami film begins with a scene in a car, which gradually became part Kiarostami’s signature style, very much similar to Takeshi Kitano’s beach scenes. The film tells the story of a man who takes on the identity of a famous Iranian filmmaker, Mohsen Mokhmalbaf – whom he has very similar facial features to – and lures a middle class family into a series of lies, one of which he asks two of the family members to be a part of his next feature. Hossain Sabzian (the man who pretended to be Mokhmalbaf) was caught in the end and put on trial. The story of the film is merely an ingredient, since what makes it really interesting is the way the film was made. Kiarostami learned about this true story in a newspaper article, he immediately went to the trial and filmed some of it and decided to make a film recreating the exact events of the story using the real people. The result was a very unique, heart-warming story about identity.

In the making of Close-Up, Abbas Kiarostami asked Hossain Sabzian and the family involved in the trial to play themselves in the film and re-enact the series of events leading up to the trial. The film breaks certain boundaries between factual and fictional storytelling, especially since some of the clips from the trial (if not all) were real, which makes it more difficult to categorise the film. The first time I saw Close-Up, I couldn’t help but recall Orson Welles’ astonishing masterpiece F for Fake(1973) (ironically, one of the companies involved in the production of F for Fake was Iranian company named SACI) which also dealt with closely similar themes such as fraud and deception, and was a mixture of factual and fictional, mockumentary-styled material. Film historian and documentary filmmaker Mark Cousins wrote an interesting article in the Sight & Soundreferring to such films as ‘generically mutated’ and trying to categorize them can be very problematic.  Close-Up easily falls in the category of ‘mutation’, especially when you have something as obscure as recreating reality so precisely, which oddly enough becomes close to being surreal.

This concept of recreating and re-enacting past events is not new to Kiarostami. A lot of his previous work is self-referential as we see him strive for a certain type of realism in most of his work. In 1992 (right after Close-Up), Kiarostami went on to recreate another intriguing series of events that he was involved in which followed a certain event involving an earthquake that occurred during the shoot of one of Kiarostami’s early films. Not confusing at all. These films were part of Kiarostami’s KokerTrilogy, which ends up looking like stories within stories, as if we were looking at the filmography of a madman yet we cannot help but see the genius in his obsession.

Most of Kiarostami’s films are character studies, sometimes in relation to the environment itself (similar to what we see in The Wind Will Carry Us Away (1999) or A Taste of Cherry (1997)). The way in which he prefers to work with a majority of amateur actors makes the characters feel more representative of humanity. There is a large degree of innocence that we see in the child in The Wind Will Carry Us Away, for instance, as well as sorrow and pain in the protagonist of Close-Up. Because those characters that we see on screen are not professional actors, it is very easy to sympathise with their emotions, because they don’t hide anything. [Spoiler] The final moments of Close-Up are so difficult to put to words. There is so much going on poetically even though it was such a simple moment. After the final trial, Hossain leaves the court and he sees Mohsen Mokhmalbaf waiting for him (easily one of the purest moments ever caught on camera). Hossain starts crying as Mokhmalbaf comforts him with a hug. This scene reminds me that such simple heart-breaking moments are what makes cinema so unique in representing the human condition on screen. Kiarostami’s work is sometimes difficult to what (because of the pace and the extreme attention needed at all time), but whenever I remember Close-Up I know that this filmmaker opened a new realm in cinema.