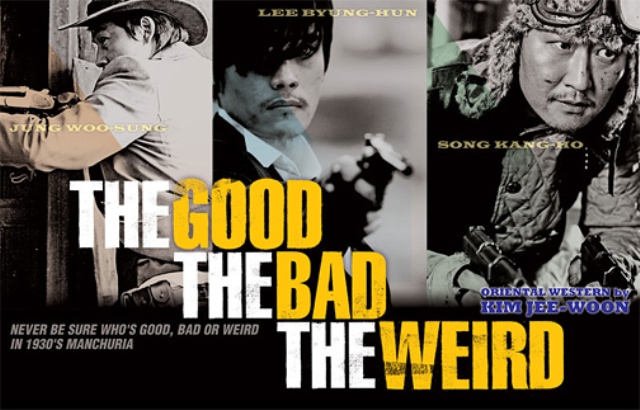 Find The Good, The Bad, The Weird on Amazon.

Even if you are vaguely aware of Italian Spaghetti Western movies, this movie title still should ring a bell. “The Good, the Bad, the Weird” is inspired by Sergio Leone’s most famous “The Good, the Bad and the Ugly” with Clint Eastwood. This movie is a Korean Western set in China’s Wild West lands of Manchuria (that technically are West of Korea). If this set-up sounds odd, well indeed it is. It is fun and unpredictable as it sounds.

The Bad (Byun-hun Lee) always wears gloves, constantly drinks and has a piercing look that can make anyone uncomfortable. He has a mission – to get a secret treasure map back to the owner, the boss of The Bad. The Good (Woo-sung Jung) wears a cowboy hat, has a shotgun and seems invincible. He has a mission – to get the map for a Korean freedom army. However his true goal is to hunt down The Bad. The Weird (Kang-ho Song) has a funny hat, two guns with seemingly unending ammunition and a lot of luck. He is there to rob the train, but accidentally takes the map. A few other parties join in – a Manchurian group of bandits, and the Japanese army along with some other characters – and the chase begins. Everybody is going after the map while trying to eliminate each other.

The shooting and chase scenes are very well made and very fun to watch, as well as the recreated Western-badlands-like Manchuria of the 1940s. With all this chaotic mixture of cultures, characters and events, and superb cinematography (by Mo-gae Lee and Seung-chul Oh) this film is as much fun to watch as it was difficult to make. (See director’s interview about hardships of filming)

Origins of Western genre come from American Frontier lore when colonies were expanding towards the Western coast of the USA. It was wild and violent period, with tension and bloodshed between settlers and Native Americans. In typical Western stories you would have a conflict between the good people, who are inside civilized society, like settlers and townspeople, and the “baddies”, the outsiders, bandits or Native Americans. Only a person who has skills of both worlds can settle this conflict, thus we have lonely cowboys (like the Lone Ranger) coming in from the outside, settling the issue, and moving out.

The concept of an outsider hero was utilized by the great Japanese director Akira Kurosawa in movies like “Yojimbo” and “Sanjuro”. At this point the Western moved to Asia and the Lonely Ranger turned into ronin, a masterless samurai. Ironically, the West copied the idea back to from Kurosawa, when Sergio Leone made “A Fistful of Dollars”, the seminal Spaghetti Western with plot taken directly from “Yojimbo”. The popularity of Spaghetti Westerns grew, and yet Leone’s “Dollars Trilogy” stays on pedestal of fame until now. Second part of the Leone’s trilogy is “The Good, the Bad and the Ugly”. Taking this film as his inspiration, Kim Jee-woon moved the genre back to Asia. Though it did not cause more directors taking up Westerns, it might still and would be really interesting to watch the evolution of the Western back to an Asian genre again.

Besides the ironical movement of the Western genre to East back to West and to East again, there is some more irony in the actual film. All three main characters have incredible exaggerated skills. Such skills that it seems clear that if joined forces together, they could overcome the Japanese colonial army themselves.  However, they focus on chasing treasure and each other.

Every Korean has a sad story – says The Good.

Though we never get to know a lot of background of the characters, the director is clearly making fun of this self-pity attitude. He shows that the self-reliant, individualistic attitude that does come from Western, especially American, ideals is actually harmful for society in the big picture. The ending scene where a fountain of oil starts pouring from the ground while our characters are laying on the ground having shot each other to find out “who is the best” is a cherry on the top of this absurd theater.

If you’re a fan of Korean film, Western film or entertaining films filled with intelligent irony, this one is not to be missed.