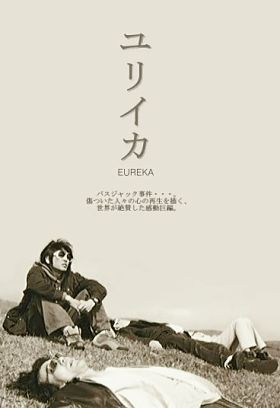 Despite being one of the most difficult films for me to finish – not least because of its bleak existential subject matter, but also because ofits long silent takes – I have to say that I wouldn’t have had it any other way. This three-hour film would not be as powerful if it was any second shorter as one of the key emotions that the Eureka attempts to capture is emptiness and trauma. The opening sequence, which plays out as an antithesis of a Michael Haneke film, is executed masterfully. Aoyama shot this sequence in one take (13:30 approx.), which serves as a de-dramatization of terrorism and acts of violence. Aoyama loves his long takes and is never afraid to keep his camera active just a little longer than usual (if there ever was such a thing).

After surviving the bus massacre Makoto (the film’s protagonist), the bus driver, finds shelter in the other two victims’ (a boy and his sister) house after the disappearance of their father and the death of their mother. The girl (Kozue) seems to have adopted a vow of silence and her older brother (Naoki) does not say very much. After an unexpected arrival of a young man (Akihiko) who claims to be their cousin, Makoto has a sudden epiphany and decides to buy a bus, abandon the house and go on a long trip. As a way to start over, Makoto uses the parking-lot (where the attack occurred) as his starting point.

Even though there isn’t much dialogue for a three-hour film – space and setting seems to be of key concern to Shinji Aoyama – the writing in Eureka is very well thought out. From a visual standpoint, every shot is framed very precisely and beautifully, whether Aoyama is executing one of his exceptionally slick tracking shots, or simply framing the characters in a still shot that is very reminiscent of John Ford westerns. When asked about his framing in an interview, Aoyama said:

I choose the camera and actors placement based on some idea of spatial distance; and that distance is really all I am thinking about. Then my cinematographer, Masaki Tamura, and I sit and talk about this over many nights and many drinks and try to figure out what would work best on screen and what we want to show […] First, we decide where our position will be and then we decide where the actors will be. And what I mean by our position is in reality something a little removed from where Tamura-san and I are: from where Tamura-san is with the camera and where I am standing watching the action. But the important thing, I feel, is that this position, which is a little removed, is where the actors’ action should be and where they could move freely.1

Space is a key component in Eureka. As the camera wonders freely from one character to another and from one location to the next, the viewer never feels obstructed in anyway. The movement of the camera seems to imitate the cycle of life itself and that world keeps moving forward despite the traumatic experiences that left the characters in some form of stillness. Another key feature related to the space in Eureka is the natural sounds that echo in the background. There are only a couple of non-diegetic musical queues (situated in key scenes), however, the rest of the film consists of sounds of nature and background noise that is purposely audible. This particular use of sound adds to the natural feeling that Aoyama attempts to capture.

Because of the subject matter, it seems that many have ignored the strange sense of humour featured in Eureka. Despite the tragic narrative and the trauma presented in the film, Aoyama incorporates comedy from time to time as a form of escapism. One of my favourite of those moments is when Makoto tries to teach Naoki how to drive, and when the car begins to move Makoto stops him after remembering that their clothes are hanging across the bus to dry. These little humorous moments are unexpected – at certain times the viewer is unsure how to react – I believe them to be an important part of the film’s realism.

This ambitious epic that won Aoyama the Jury Prize in Cannes (which was definitely well deserved) – however exhausting and difficult to watch at times – remains to be one of the most important Japanese films of the 2000s. The melancholic monochrome look is used powerfully to create a contemplative and existential story that is well worth experiencing.