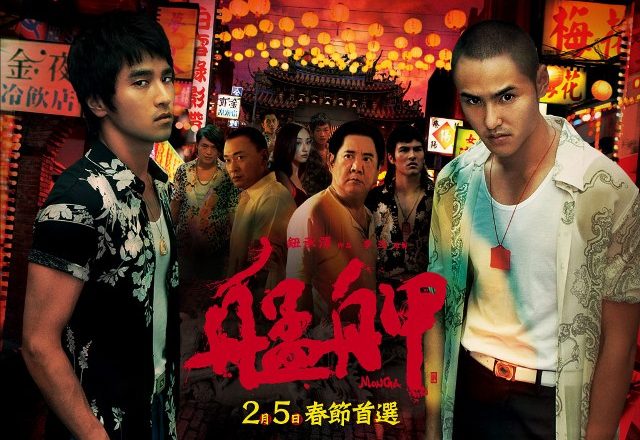 This is a second take on writing a review for the Taiwanese high grossing gangster film “Monga”. After receiving comments from people who viewed the film and then upon re-watching, I noticed more nuances in the story that are interesting enough to be mentioned. Warning – this review will contain spoilers.

“Monga” tells its own version of Taiwanese gangster life in the 1980’s, when Hawaiian shirt, wooden sandals and meaningless fighting was a part of everyday life. The story is told through the eyes of Chou Yi-mong or Mosquito (Mark Chao). He has always been “that kid who everybody picks on”. It doesn’t change when he moves to a new high school, as he immediately draws the attention of local bullies. No wonder he immediately agrees to join a local gang when a chance comes up.

“From now on his business is my business. His enemy is my enemy”.

Thus “Gang of Princes” is formed. Other two members of the Five are A-Po (Huang Teng-hui) and Tsai Chang Hsien, or Monkey (Emerson Tsai). However, they are there just to fill the space, while the main story revolves around Mosquito and Monk, who is the actual shadow leader of the gang. At first things go very smooth, all five get closer through having fun and meaningless street fighting:

“Does this fighting have any meaning?” – Mosquito asks. “What the fuck is meaning? I know of brotherhood, never heard of meaning” – is the answer. And the fight goes on.

However, being a gangster by definition is not meant to end up well. A few issues come up that start placing cracks into the newly forged brotherhood. One comes from Dragon Lee’s father, Boss Geta.  We get to know that he was the one who cut Monk’s fathers hand off in order to become a boss. This puts him into a difficult situation, tension between loyalty to brothers and loyalty to family. Another problem comes all the way from Mainland China, as a mafia boss from there wants to take more control of the Monga district. Both issues meet and as a result Monk decides to place revenge for his father above brotherhood. Betrayal ends up in inevitable destruction where brothers kill brothers despite their mutual love.

Talking about love brings me to one of the plot nuances that I did notice but did not put much attention on when first reviewing the film. There is a clear indication of gay love between Monk and Dragon (though mostly it is one-sided, Monk’s feelings). Mosquito mentions it telling Monk’s background story:

“Having grown up with Dragon he only cares about Dragon. His definition of brotherhood is incomprehensible to others”

This bromance is rarely mentioned by other reviewers, I found it only in Taipei Times. But as you pay attention to this nuance, it brings more tension and makes the Monk character even more interesting. Gay love is not something accepted in Asia, especially in 80s Taiwan. However, the close relationship between Monk and Dragon is noticeable and it makes more sense why Boss Geta gets so furious in the scene when Monk takes all the blame for an accidental killing, protecting Dragon. We can see that his brutal outrage that nearly kills Monk is not only due to background story between Monk’s father and Geta, but also because of the sexual threat that Monk poses. The last scene where Dragon stabs Monk in the gut also becomes more powerful with it’s double meaning and style; a long knife penetrating Monk’s abdomen many times… if you catch the Freudian Interpretation here.

Other nuance comes from broader historical circumstances of the movie’s depicted time. The 80s were the end of a long period of martial law and one-party system imposed by Chiang Kai-shek in Taiwan. This turn to democratization also sprouted cultural localization. While KMT (Kuomingtan) party was enforcing one “Chinese-people-speaking-Mandarin” identity, new Taiwan embraced all local cultural nuances and languages, and they are really abundant in this considerably small island. Characters in the movie speak a mixture of Mandarin and Taiwanese, taking a pride of their separate identity. In the movie, the threat of a mafia boss from the Mainland symbolizes the general threat of rising Mainland China. As a character, Monk made a difficult moral choice and sided with Mainland power for his personal reasons. That may be seen as another reason why he is destroyed in the movie while all others survive against the odds. In this sense, “Monga” is also a movie portraying Taiwan’s national pride and strive for an identity separate from China.

“Monga” was a huge hit in the Taiwanese box office, defeating even James Cameron’s “Avatar” (source: Beyond Hollywood). One of the main reasons for such success is of course casting, especially Mosquito (趙又廷) and Monk (阮經天), bringing a lot of spectators from their fan-base. I can only assume that another reason for the success was the style of the film. Watching other Asian gangster dramas from Japan and Korea, one might develop certain expectation of violence and grittiness portrayed.While “Monga” does have its own share of violence, all that is diluted by the beautiful visual style of the movie that transforms it into a less realistic, almost fairy-tale realm. This made the film much more approachable for the general public, especially younger female fans drawn in by their idols.

Therefore, if you expect to see a normal gritty gangster-crime action movie, this would not be your first choice. “Monga” is where a gangster film borders coming-of-age teen friendship and romance story. In these terms, it really does a good job. Though I do think it’s a bit too long, and some scenes too repetitive, bringing the story back and forth. Despite that, “Monga” is a well-made movie, highly enjoyable to watch. It is a popular genre, more mass audience orientated than previously reviewed Taiwanese auteur films by Hou Hsiao-hsien and Tsai Ming-liang. Thus it can be a starting point for a person who wants to see Taiwanese movies, but doesn’t want to begin with a more special style of auteur film.