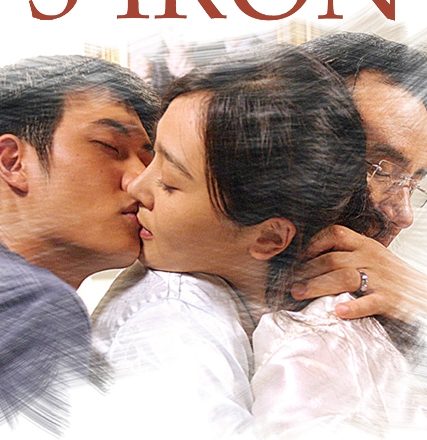 From the long list of South Korean film auteurs, Kim Ki-duk could easily be labelled the most controversial Korean filmmaker to date. Even those familiar with “extreme” South Korean films and their violent visuals might be stunned by the gruesome imagery in much of Kim’s work. After consistently harsh criticism from Korean critics and the public, Kim’s films garnered high praise and acclaim internationally, primarily in Europe. Unlike many Korean directors who are renowned for their visual styles, Kim’s style resides in his exceptionally unique stories. Similar to Spring, Summer, Autumn, Winter… and Spring (2003) (which you are only likely to find if you already know about Kim Ki-duk), 3-Iron carries a larger degree of mysticism and poetry than pure violence. It balances delicacy with chaos, and peace with violence; and that sort of contrast is what makes the film exceptional.

Kim Ki-duk tells incredible stories in his films, introducing characters so interesting that they create infinite depth plot depth. 3-Iron is a wonderful example of this. In the film, Kim tells the story of a drifter who goes around breaking into empty houses (hence the Korean title Empty House) until he breaks into a house where he encounters a beautiful woman and her abusive husband. Everything in this film is told in a metaphoric manner. For example, when the abusive husband comes into the house, the drifter, Tae-suk, is already there in the garden playing golf, but the husband is blind to him because of his anger toward his wife. It is awhile after beating his wife that he actually becomes aware of the stranger in his own house. The themes of invisibility and shadowing are common throughout 3-Iron, and many of the characters appear to be emotionally blind. After being spotted, Tae-suk shifts his position, and starts hitting his golf balls at the husband, targeting very sensitive body parts. This is another metaphoric scene, where a golf club (viewed as a symbol of luxury) is being used against its master, as if the husband is finally being punished for his sins. Finally, the drifter walks out quietly, as nothing had happened. He waits on his motorbike until the wife finally decides to leave with him.

All of this happens early in the film, which is an odd style of narrative in which the climax is witnessed at the beginning of the film, however, it is that complexity that makes the film unique. For example, the two main characters remain silent throughout the whole film, except for two lines spoken by Sun-hwa, the wife. I cannot help but recall Refn’s Only God Forgives (2013) after watching 3-Iron. Although the two filmmakers display completely different environments in each of those films, they use the same technique of storytelling through silence. This is an interesting exploration of the potential of silence by Kim Ki-duk in this particular film, conveying to the audience the growing relationship between Tae-suk and Sun-hwa using no dialogue whatsoever.  This is deeply connected to the idea of ‘eyes’: visibility versus invisibility. Kim hints at this theme often, and he expresses it brilliantly through the physical interactions of the characters and the space around them.

Focusing on the main character, the viewer quickly detects Tae-suk’s obsession with being invisible, and he even projects a sense of emptiness everywhere around himself. The streets are even conspicuously empty when he looks for houses to break into. Prison scenes are conventionally means to demonstrate a character’s journey of change, and the eventual reaching of an epiphany; however, 3-Iron is far from conventional. In the final prison sequence, Tae-suk trains himself in the art of shadowing; and after several attempts to become invisible to the prison guard, he finally succeeds. In my opinion, this is the most poetic and magical sequence to be experienced in 3-Iron. Kim Ki-duk brings the viewer along on the completely unorthodox journey of this character inside the prison; and even though it might take awhile to understand exactly what Tae-suk is trying to master, the audience will likely find the process mesmerizing.  Tae-suk’s self-transformation into a living shadow relates to Kim’s quote in the end of the film, “It’s hard to tell that the world we live in is either a reality or a dream.” The film really only seems to resemble a dream toward the end, but there are various hints throughout the whole film, such as: the empty environment; the shocking coincidences; and of course, the silence.

3-Iron is a highly emotional and engrossing experience. Throughout the film, there is a certain rhythm of peace and calm, even in its most violent scenes; and the repeated use of the Natacha Atlas song, Gafsa, is also very captivating. Surprisingly, as an Arab who personally cannot stand Arabic music, I think Kim Ki-duk could not have found a more suitable song. For anyone who wants to start viewing Kim Ki-duk’s films, I believe that 3-Iron is the best place to start.