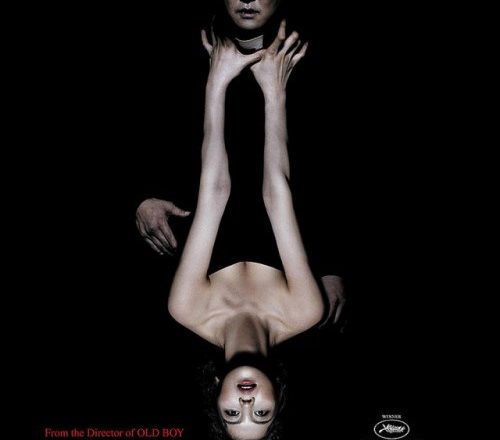 “Thirst” is a vampire movie, but not the kind you would expect from the genre. It does have blood sucking, sexuality, violence and all the attributes expected of vampires, but Park Chan-wook also manages to achieve a fresh look. It’s a horror film, yes, but also a story of illicit love, a thriller, and an absurd comedy.  The story details the moral downfall of a priest and the empowerment of a housewife.

Sang-hyun is a devoted Catholic priest who works at a hospital. Looking for more ways to show his devotion, he volunteers for a medical experiment in which he is infected with the Emmanuel Virus in hopes to find a vaccine for it. All volunteers in the experiment die, and so does Sang-hyun…at first. A blood transfusion from an anonymous source brings the priest back to undead-life as a vampire. After his transformation, he gains a following, as people believe he has magic healing powers. Sang-hyun meets an old childhood friend Kang-woo who has been hospitalized with cancer. Sang-hyun heals his old friend, presumptively using his new powers, who then invites him to the evening mahjong session at Kang-woo’s house. Sang-hyun is introduced to a strange little world made up of the bizarre relationship dynamics between Kang-woo; his wife, Tae-ju; and his mother, Lady Ra. Sang-hyun is immediately attracted to Kang-woo’s wife, and she seems intrigued by his attention. Sang-hyun tries to manage his newfound lust for blood, as well as his lust for sex; but step-by-step, both get out of hand. As Sang-hyun and Tae-ju’s affair progresses, she becomes scared and appalled by the realization that she is dating a vampire.  Her sentiments soon change, and she feels empowered and comforted by it. She views Sang-hyun as a possible savior from the dreadful everyday existence of her dysfunctional family. (spoilers!) She boldly takes advantage of her newfound empowerment though her vampire-boyfriend. The lovers plot to kill Kang-woo after Tae-ju deceitfully convinces Sang-hyun that her husband abuses her.

“Will this make us happy,” he asks just before their final decision.

“Of course, silly,” she replies.

After the deed is done; however, the guilt looms over them, quite literally. Tae-ju starts seeing her dead husband everywhere. Tension builds to enormous levels, and a series of brutal events result in Tae-ju’s turning into a vampire. Reborn, she embraces her bloody and powerful new existence. She continues her dark transformation, leaving her a bloodthirsty beast beyond Sang-hyun’s control. Eventually, he decides that a supernatural murder-suicide is the only escape from their tragic existence, and uses a sunrise to destroy them both.

Primarily, this movie is an exploration of the moral struggle by the main character, Sang-hyun. As the director expressed:

“You have the moral height of being this noble priest, and the moral downfall to where you become a vampire, taking others’ blood. It’s such a height to make such a fall.” (Source: Rotten Tomatoes)

It is interesting to watch his struggle. At first, he only drinks blood from a coma patient, rationalizing that he would be “willing to share his blood.” He tries to justify his actions, saying that it is not his fault that he became a vampire, and that he has the purest of intentions. His character had a very predictable pattern of development: firstly, he rejected his vampire self; then he adjusted to it bit by bit; then he embraced it fully, only to atone and self-destruct in the end. I actually found Tae-ju’s transformation to be even more complicated and compelling. The director explains:

“It almost feels as if her clock is running in reverse. She starts off as a downtrodden housewife, and then she turns into a young woman in love, and then when she becomes a vampire, there is this dialogue saying, “Happy birthday,” and this is where she is turned into almost a child, a baby.”

All her life she lived as a “puppy” for Lady Ra’s and Kang-woo’s pleasure. She did not have a choice in her destiny, and only knew existence in their little bizarre world. To Sang-hyun, she is at first an interesting distraction. He sees her as a woman and desires her, while she has more of a sibling-like relationship with her husband. Eventually, he becomes her savior, a superhero, and a doorway to an absolutely different life. As a priest and a vampire, Sang-hyun cannot offer her anything resembling a “normal life.” She becomes free and powerful, but she is consumed by the darkness of her new identity. She becomes vengeful and destructive, as well as hypersexual. Eventually, she goes too far, and it becomes too much for Sang-hyun to bear. His moral obligation is stronger than either his vampire lust for blood or his love for Tae-ju. Both characters initially experience similar physical and identity transformations; but Sang-hyun circles back to the morality of priest while Tae-ju continues evolving throughout the film, keeping the viewers surprised.

The movie has a distinctive Cronenbergesque sense to it. The bodily transformation caused by the Emmanuel Virus is shown very vividly. Sexuality, and the sharing of body fluids (either sexually or though blood sucking) is shown graphically. Sounds are also emphasized, and the blood sucking experience is strong audibly as well as visually. Thirst does not fit the horror genre fully, as it ponders the moral issues surrounding transformation rather than focusing on the transformation itself.

While very enjoyable, the movie was also confusing at times. I watched the Director’s Cut, and it seemed too extended. Characters swing back and forth in their identities so much that it becomes repetitive and messy. I also wondered frequently about the motivation behind different character actions. “Why is he doing that… again?” A shorter, more coherent version would have created a more fluid experience of the film.

“Thirst” is truly something unique in the crush of recent vampire movies. It touches some deep moral issues, but at the same time it does not take itself too seriously. Park Chan-wook’s films are filled with absurd comedic scenes, and this one is no exception. It is a unique blend of contrasting film motifs, and not everyone will enjoy the taste; but in my opinion, it is sure worth a try.