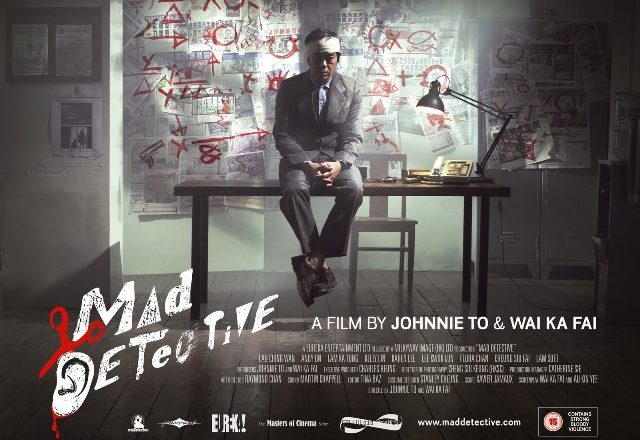 Director: Johnnie To and Wai Ka-Fai

I was furious when I found out that this film actually existed and I had just heard about it a month ago. I had been looking for it ever since, seemingly hopelessly, since the DVD version was out of print. Finally, I was lucky enough to spot the dual format edition in the BFI film store in London, and I didn’t think twice before buying it. I urge you if you ever spot this film anywhere to buy it because it is a modern masterpiece.

The film is difficult to categorize into a specific genre. The title clearly suggests that it is a crime/ gangster film, but the plot is much more complicated and interesting than that genre’s typical offering. The film is focused on a protagonist detective who’s known for his unconventional ways of solving cases. As we progress forward in the story, we learn that he is actually mentally ill, at least according to most of the supporting characters. Eventually, the ‘mad detective’ Chan gets fired, but he gets an unexpected visit from an inspector named Ho who admired Chan’s infamous reputation for solving cases. Ho asks Chan to help him with an unsolved case (a complicated series of robberies and homicide), and this is where the madness begins. Chan tells Ho that he can solve cases because he has the ability to see people’s inner personalities, literally.

At first it is completely confusing when we learn about Chan’s so-called ‘gift’. Only the audience can see what he sees, and we end up believing that it is what he actually sees. Chan’s delusions are where Jonnie To and Wai Ka-Fai show off their brilliance in genre hybridity. The noir-psychological elements of Mad Detective are extremely well constructed to give the audience an unusual experience.

This is not the first time that Johnnie To and Wai Ka-Fai have joined forces. The long-time friends worked together before on Needing You… (2000), Turn Left, Turn Right (2003), My Left Eye Sees Ghosts (2002), Fulltime Killer (2001), and Running on Karma (2003). Johnnie To has a long history of experimental arthouse cinema, mostly in crime and gangster films, especially after he started his own production company, Milkyway. To has an interesting way of working, stating:

For every few commercial films I make, I have to do something that is entirely personal without considering what the market wants. There’s a lot of satisfaction as well as pressure in it. But it’s regular exercise I see to evaluate myself. [1]

Mad Detective clearly belongs to To’s ‘personal films’. Interestingly enough, this collaboration between To and Wai is so well constructed that it almost becomes difficult to perceive there are two separate filmmakers. This recalls similar collaborations that might be more familiar to mainstream audiences, most notably, Andy and Lana Wachowski and the Coen Brothers. The use of the familiar style and ensemble makes the collaboration appear as if it was the work of a single-minded filmmaker.

In my opinion, To and Wai’s take on obsession and delusion is one of the most original achieved in the crime genre. The protagonist’s character is extremely complex and well-constructed. I am always interested in those little moments in films that are executed with precision to the point where they get stuck in your head forever. Mad Detective is packed with those unique moments that blend aesthetics and narrative beautifully. In the opening scene, for example, we see Chan with a knife in his hand circling a pig corpse hanging from the ceiling. In another scene, Chan lays in a hole in the middle of the forest preparing to bury himself alive. These small episodic moments are well thought out and artistically designed to fit within Chan’s stream of consciousness, allowing the viewer to poetically experience the character’s emotions and thoughts.

This film deserves a lot more attention and appreciation. Arthouse gangster/crime films are one of my favourite genres, and I believe they are the most exciting to experiment with. Hong Kong cinema remains one of the most exciting and refreshing national cinemas as it continues to develop interesting ways of blending genres. Mad Detective is a modern classic, and it is always exciting when filmmakers are not afraid to experiment with non-conventional ideas.