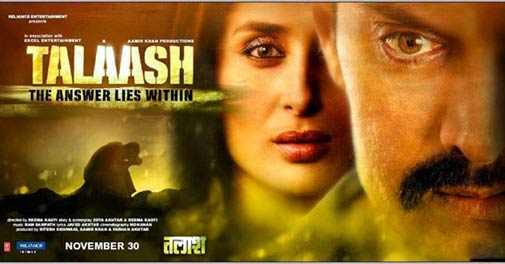 Talaash: The Answer Lies Within

Director Reema Kagti takes on a genre rarely seen in Bollywood movies – a mystery thriller with neo-noir motifs. Inspired by such films as Joon-ho Bong’s “Memories of Murder” and Roman Polanski’s classic, “Chinatown” (Source: Reuters), “Talaash” takes us to the dark alleys of Mumbai where “a smile doesn’t reach the eye.” Everybody there has dark secrets and sorrows, struggling to find small joys and hope in their daily lives.

The movie is fast paced from the beginning, and just after the opening song we see a car crash and plunge into the sea. Police retrieve the car and identify the victim as Bollywood super star, Armaan Kapoor. Inspector Surjan Singh Sekhawat (Aamir Khan) investigates the case, unveiling deepening mysterious circumstances. The investigation leads to the Red Light district, a place where people are unwilling to cooperate with the law enforcement. Only one prostitute, Rosie (Kareena Kapoor), helps Surjan in his quest. We also learn what torments this no-nonsense, hard, seemingly emotionless cop. He and his wife, Roshni (Rani Mukerji), recently lost their eight year old son Karan in a boating accident. The family is broken, and Roshni feels that she lost her husband along with her son. Surjan is drowning in guilt, not sleeping, and not letting anyone get through to him. Roshni seeks answers in the spiritual world through a medium who stumbles into their lives. Meanwhile, Surjan tries to find his own answers in Rosie’s company. “Is anyone really happy? Are you happy?” he asks. “I have my moments,” she answers. A third subplot also develops in which Tehmur (Nawazuddin Siddiqui), an underdog henchman and limp son of a prostitute, is the central character. Overseeing and overhearing small details of the whole murder case, he schemes his own little plan hoping to get out of his miserable reality.

The director masterfully blends all three stories with quick and smooth transitions from scene to scene, and the brilliant soundtrack (by Ram Sampath) glues the visual and the emotional elements together. The main actors do the superb job expected from such stars. It was my first film seeing Nawazuddin Siddiqui, and I was very impressed. His performance as Tehmur brought that subplot to such emotional heights that it became my favorite part of the story. Apart from the acting, the cinematography (by K. U. Mohanan) and editing (by Anand Subaya) deserve separate acknowledgment too. Rapidly changing scenes are orchestrated in a way that doesn’t confuse the spectator (that can easily happen developing a few different subplots at the same time), but actually adds to the tension and suspense. The unconventional camera movements and angles, the motif of neo-noir genre, also add a lot to the viewing experience (Source: Wikipedia). The camera seems to be hidden sometimes, secretly following the dark deeds of characters. The darkest character also became my favorite, Mumbai itself. It lures you with its flashy lights and fancy façade while its inside is corrupt and ugly. It’s a sin city like Los Angeles in “Chinatown”.

The main plot of the film, the mystery crime, is very captivating, but the culmination is rather disappointing. It has been extensively discussed in many other reviews (Example: A Potpourri of Vestiges).

I am glad that I stumbled upon Film Impressions blog, and I was compelled to re-watch the film before reviewing it. The second time watching was more pleasurable, noticing the subplots and all the cinematographic details mentioned previously, rather than the detective side of the story. Deepa Deosthalee’s essay on “Talaash” in Film Impressions mostly focuses on the subplot about Surjan and his struggle with the loss of a son. She compares the film to Nanni Moretti’s Italian drama, “The Son’s Room”, discussing the similarity in the psychological journey that the couple must take to recover from such a horrible loss. This essay truly shines a light on nuances of the film that might be lost during the first viewing.

An element prevalent throughout the film is water. Water is an essential element in every religion of the world, as well as Hinduism. It is part of many religious rituals, associated with both birth and death. In the film, water primarily represents death: Armaan Kapoor drowns in his car, Karan drowns in a boating accident, and a few more water related deaths. Only in the end, when Aamir Khan’s character takes a shower after performing a burial ritual, does water have a purifying element to it.

The mirror is another element that I found interestingly omnipresent when Kareena Karpoor’s character appears.  That led me to look for a connection between mirrors and ghosts, and my search turned up the term spectrophilia. The term is defined as deriving “sexual pleasure and arousal from ghosts and spirits”. (Source: Dr Mark Griffiths) Firstly, ghosts in India are called bhoot or bhut. These are beings that could not move on to reincarnation or the afterlife due to violent deaths, unsettled matters or lack of proper funerals. This definition fits Rosie perfectly; and though she is not an evil succubus, she certainly holds sexual appeal for Surjan. As spectrophilia is defined, it is often the image or reflection in a mirror that arouses a person. (Source: Phantasy Publishing) This minor element makes the ghost-story part of the film more thoughtful and detailed.

The English translation of the word “talaash” is “search”, and all characters in this movie search for different things: the secret behind a murder case, peace of mind after a tragic loss, the lost connection with a spouse, revenge for an unjust deed, or simply hope in seemingly hopeless life circumstances. As the noir genre demands, not all characters find for what they are seeking. Some do, and some disappear in the “city of lost souls”. The title of the movie encourages looking for those answers within; however, the end of the film refutes this notion by taking more of an “X-Files” approach to the topic…“The Truth Is Out There”. Even though the director explains that the “shocker” ending is a metaphor, it would require a more subtle approach to be sufficiently metaphoric. Many reviews of “Talaash” condemn the ending, but I would just say that the choice of ending is the difference between the good movie it is and the great movie it could have been.