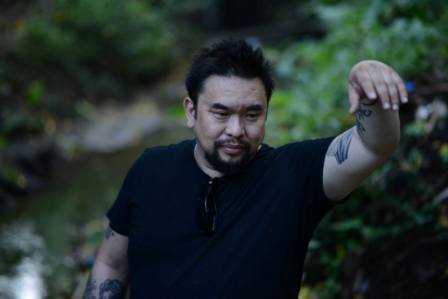 Christopher Ad Castillo about arts of filmmaking, inspiration, Filipino film industry and experience growing up as a son of legendary filmmaker.

Were you inspired by your father to take up the camera or did the inspiration came later?

I have always been inspired by my father Celso Ad Castillo. He never asked me to join the industry. He never mentioned it at all but he always brought me to the set as much as possible and let me just watch him and experience the whole filmmaking world. I know that was his idea of letting me make the decision for myself whether I wanted to follow his footsteps. Personally I knew I was going to. I was destined to be like him in more ways than one. We’re almost like the same person right down to the mannerisms.

Tell more about your filmmaking journey so far? What were the challenges?

My first film The Sky is Falling took a year to finish since we only worked on weekends but when Variety gave it a good review, it opened a lot of doors for me with the major studios. I was able to option a couple of scripts and meet a lot of people within the system. But it has been challenging for the most part because I am the son of a legendary and iconic filmmaker, one of the best in the world. I have giant footsteps to follow and my films are more scrutinized than others. I am given no quarter in my art especially with my first Filipino film The Diplomat Hotel. But that is something I fully accept and knew from the beginning that it was something I would have to deal with. I have never shied away from his legacy and I actually run towards it. I am not my father and never will be since he is a certified genius and an original. They broke the mold with him. I will be forever compared to him and all I can do is put a stamp on my own identity and my films. And so far I have done that. The people that watch my films have come up to me to say that they’re very happy that I’m doing something original and different from the norm. That they appreciate me taking chances with my filmmaking. And that’s better than any positive review I can get because it’s more personal to me. It came from people that understand that there is still a semblance of originality in cinema and that it is important to have a different experience than what is usually fed them. The journey has been great so far even with its pitfalls. Creation is the most important thing people can do in their lifetime. When all is said and done, I did something so hard that only a handful of the total population of the world can do.

Tell more about your last film In Darkness We Live.

I love Japanese gangster films and French extremist horror so what better way than to put them together in one film. That’s the genesis behind it. I like films that take a left turn somewhere and becomes a totally different film. We have very few of those mash up genres. The best example is the French film Martyrs. It was original and smart and not just gory and bloody. That turn in the middle was brilliant. And my film was also a way to work with some of my favorite actors who also happen to be my friends and that makes doing it fun. The film only had a treatment and the dialogue was all ad-libbed on the spot. It was really something I designed to get a more organic feel on the acting and capture moments of raw power that you would not be able to get on a film that is totally rehearsed. I’m very happy the way it came out and it placed second on The Audience Choice Award at QCinema International. Surprising given its sex and a lot of violence but maybe that is why the audience liked it. And my two leads were both nominated for Best Actor so I take pride in that I was able to give them the freedom to do great work that is appreciated.

What is your next project going to be like?

I just recently finished a short film titled The Battle. It’s a drama about a wife receiving a call from her dying soldier husband who has been ambushed. It’s inspired by the recent massacre of soldiers that was tagged The Fallen 44 in the Philippines. It’s basically a one actor piece with just the woman and the husband is just a voice on the phone. It’s a departure from what I usually do since it is straight drama but there is still horror but on a different plain. The horror of war at home. Then I am going to shoot a 5 minute proof of concept for investors of an American horror film titled Devil May Care. It’s about people who go inside their dreams to battle their demons. It’s been a couple of years since I did a film in the States so it’s about time.

What do you think of Filipino film industry nowadays compared to the past? What are some thing you like and don’t like about it?

My father was part of the Golden Age of Philippine Cinema which was the 70’s. There were great filmmakers doing great films. It was the time when the director was king. But when the corporations started to take over and TV became popular, our cinema started to die. Gone were the independent producers who left the filmmakers alone to create something new and provocative. Cinema became a factory where they would churn out films like clockwork with no mind to art or sensibilities. It was all about the money. And it still is at the moment and I don’t see it changing during my lifetime. There is an independent cinema movement but the lack of audience and appreciation makes it hard to sustain and it is always in resuscitation mode. There is also a lack of true cineaste critics and scholars that can truly study these indie films and create a discourse on it and intelligently review them and at the same time help disseminate them for future filmmakers. All we have are run of the mill critics and bloggers who are more concerned about their Facebook and Twitter followers than truly understanding the film in front of them. They have no idea of the different film styles and philosophies therefore incompetent.

What are the directors that inspired your filmmaking style the most?

My father obviously is a great inspiration and I have inherited his visual “eye”. Whether critics like my film or not as a whole, they have always been generous in citing my visual style. Other filmmakers I studied are the Kurosawas, both Akira and Kiyoshi. Jacques Tourneur was a big influence when it came to shadows and dread. I love his black and white films and no one does it better. My first film The Sky is Falling was influenced by Roman Polanski’s Repulsion and it was very cool that I was compared to him early on. More contemporary directors that I draw inspiration from are David Fincher and Nicolas Winding Refn.

If you had unlimited finances, what would be the film project you would like to take up the most?

I have an end of the world screenplay that deals with The Four Horsemen of the Apocalypse titled Ignite. It is big, huge and bombastic with lots of special effects and nonstop action. So someone give me an unlimited budget and I will deliver to you a grand epic of a spectacle. Major Hollywood studios were looking at it at one point but it’s too intelligent for them. They even asked me to dumb it down. And since I don’t have the means yet, I am developing it into a graphic novel which is suitable to its style and look.

Where can audience see more of your work and follow you online?

For now, my films are just available at festivals. The Sky is Falling was released on DVD years ago but I’m not sure if it’s still available and The Diplomat Hotel regularly plays on Philippine TV. Obviously all of them will be eventually released as a stream and on home media. And if anyone wants to talk film they can reach me via Facebook. Just look for lakillsme. I’m always discussing film with people from different walks of life from all over the world. And that’s liberating.