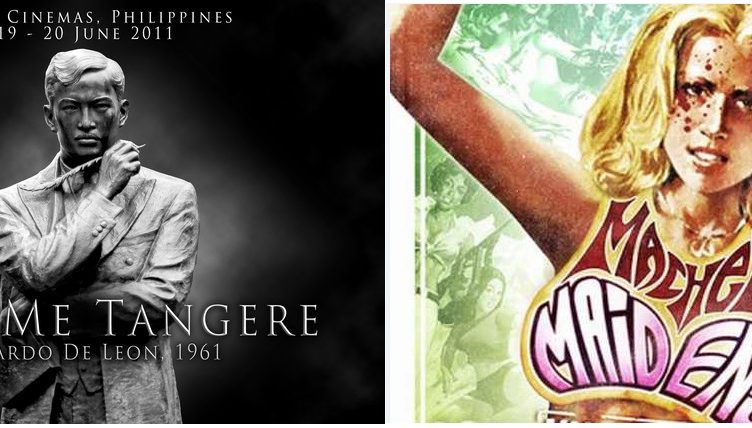 Filipino film history is marked by continuous tension between local Filipino movies and imported Hollywood ones. Though Hollywood production had always been, and still is the biggest competitor to almost every local film market, for the Philippines it is even more so due to the colonial heritage. This tension brought ups and downs for the local Tagalog film. There were times when they are shunned by English-speaking intelligentsia as, as only suitable for bakya – an unsophisticated mass of rural people. Other times they have been praised by nationalist youth, trying to break away from the colonial mentality. As Bienvenido Lumbera admits in preface of his book “Re-Viewing Filipino Cinema”:

As a provinciano in the capital city who wanted to preserve my veneer of big-town sophistication, I knew well enough to keep quiet about my “uncouth” fondness for local film.

Film was brought to the Philippines by foreigners. First movies shot in the Philippines were by Spaniard Anotnio Ramos, who made such titles as Panorama de Manila (Manila landscape), Fiesta de Quiapo (Quiapo Fiesta), Puwente de España (Bridge of Spain), and Esceñas Callejeras (Street scenes), in 1898. (Source: ncca.gov) Film was a novel curiosity and did bring audiences to see them, but not until 1912 did real interest in cinema begin. That year two American businessmen created a sensation in Manila by putting on a film story about Jose P. Rizal’s execution. This hit a chord with Filipinos as Rizal was their national hero and the story was considerably fresh. He was a poet, writer, painter, journalist and activist. His most famous books “Noli Me Tangere” and “El Filibusterismo” in their elegant narrative warned Filipinos about the theocratic tyranny of Catholic Church. For this he was accused of treason and executed in 1896. This event triggered the Philippine Revolution that was one of the reasons Spanish Colonial rule in the Philippines ended, though that did end up being a start of American colonial rule. Going back to film history – Rizal’s story was very important to Filipinos to this day.
Great ticket sales of Rizal’s story showed business potential in making movies and encouraged some entrepreneurs trying their skill. The name that stands out was Jose Nepomuceno, so called “Father of Philippine Movies”. He was a successful photographer, who sold his studio to go into risky filmmaking. His first film was based on a famous musical play Dalagang Bukid (Country Maiden). As there were no sound movies at this time, he used singers and live band behind the screen to bring the musical to life.

Though Filipino early film was in no way able to compete with Hollywood production quality-wise, “they drew narratives and themes from Filipino lives themselves”. Thus they were of interest to masses, especially people who did not have a good enough education in English to understand dialogues in Hollywood films. However, most of the early films are now lost. At the time of their making they were looked at as a temporary product for consumption, rather than an art form. Thus actually archiving and saving movies was not a priority. A lot of them were burned during the Pacific War and we only know about them from scarce mentions in magazines and posters. (Source: “Re-viewing Filipino Cinema”)

After the war in 1950s it was the time of “Big Three” Studios – Sampaguita, LVN, and Premiere. This time is titled as The First Golden Age. Not only did Tagalog film became more popular among local people, it also achieved international acclaim. Namely Manuel Conde’s film “Genghis Khan”, that was accepted for the screening in Venice Film Festival. It was a big project with many funny inside stories, that I found in a book “Filipino Directors Up Close”. One of them tells about the horses Conde had to use in the movie. They were very short karitela horses and Filipino audience found them hilarious, as they looked so miniscule compared to the actors. However, when screening his film in Hollywood, he got to know that those horses were very much like the actual extinct breed that was used by Mongolians in those times. Conde was indeed a very determined director, with drive, vision and sense of humor.

Overwhelmed by vastness of cinematic epic, several people told Conde: Even Cecil B. deMille didn’t attempt to do Genghis Khan. To which Conde answered, self-deprecatingly: “You know what bumble bee is? By all the theories of aerodynamics, its body is too big for its wings. But nobody tells the bumblebee that he cannot fly! In my case, nobody told me I couldn’t do Genhis Khan. (Source: “The Cinema of Manuel Conde” by Nick Tiongson)

Filmmaking is very interesting and complicated. It depends a lot on so many political and economical factors, like taxation, investors, government policy on movie theaters (especially local vs. foreign movie quota). Due to many of these circumstances in the 1960s there was a decline of big studios and Filipino cinema became a very different landscape. Icon of the time is the so called bomba films – melodrama with explicit sex scenes. Other inspirations came from films around the world, thus Filipino cowboys, samurais, Kung Fu masters and James Bond’s filled the screens. (Source: “Re-viewing Filipino Cinema”)

The 1970’s until the early 80s is termed as a Second Gold Age of Philippine cinema. Interestingly, this is the time when the Philippines were put under Martial Law by Marco’s dictatorship. On one hand, government supported and promoted film industry, but on the other hand they introduced heavy censorship. But as it often happens, it is the times of government restrictions that very artistic works are made. These were times of some of the greatest Filipino film makers: Lino Brocka, Ishmael Bernal, Celso Ad. Castillio, Eddie Romero, Mike de Leon. With government support directors could make more financially risky films focusing on arts rather than profit. And at the same time they tried to find ways to criticize the authoritarian government in subtle ways, thus starting a film tradition with strong social commentary. One of outstanding ones is “Manila by Night/City After Dark” by Ishmael Bernal, criticizing Marco’s “City of Man”. Another one is “Batch 81” by Mike de Leon. This was start of “New Filipino cinema” and as Bienvenido Lumbera expressed:

What matters, however, is that these atypical products of the industry have sharpened the consciousness of he audiences that films need not to be dull to be relevant nor inaccessible to be artistic.

While producing some of most artistic films, Filipino film industry was much better known internationally as a powerhouse for B-movies. Cheap filmmaking in the Philippines attracted a lot of foreign grindhouse movie makers too. Thus a world of karate midgets, paper-mâché monsters, busty woman in jungle prisons was unleashed. The phenomenon is documented in a film “Machette Maidens Unleashed!” by Mark Hartley (Not Quite Hollywood).

In the late 80’s and 90’s filmmaking declined again. The Asian economic crisis was a big blow to all studios. The 2000’s are marked by a rise of independent filmmaking especially in digital film. In 200 Raymond Red’s short “Anino” (Shadows) won Palm d’Or at the Cannes Film Festival.

This inspired rise of New Wave film in digital form. First decade had many other successes locally and in international festivals. Commercially, the industry is on a revival period and is now producing quality movies. One of the most internationally known directors this day is Brilliante “Dante” Mendoza. He went into filmmaking after years of working in advertising, which is lucky for the Filipino film industry – Dante’s films competed in international film festivals and won the Best Director Award in the 62nd Cannes Film Festival for his movie “Kinatay”. Explaining why he took the risk of going into film, he simply answered:

I didn’t know if I was doing the right thing. I just followed my heart. (Source: “Filipino Directors Up Close”)

Filipino cinema nowadays is exciting to follow. Though still populated by cliché chick flicks and cheap comedy, it does produce some of the best quality Asian films.