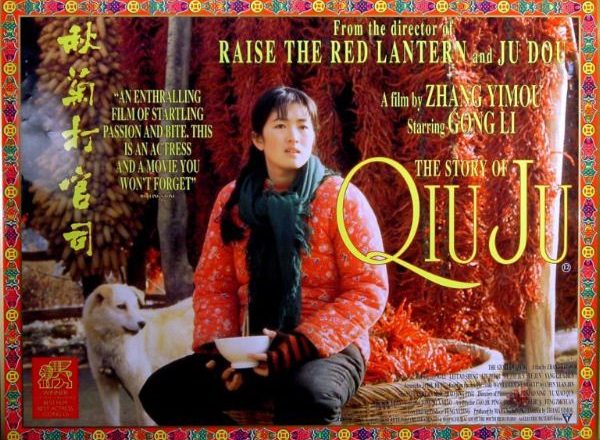 The Story of Qiu Ju (秋菊打官司)

“The Story Of Qiu Ju” on Amazon.

After seeing such visually elegant films from the director Zhang Yimou like “Ju Dou” and “Raise the Red Lantern”, “The Story of Qiu Ju” strikes with its contrasting simplicity. As Roger Ebert points out

Director’s muse, actress Gong Li, also matches the raw style of the film, convincingly disguising her beauty and elegance under a robe of a pregnant peasant woman.

As camera closes in, we see our character Qiu Ju (Gong Li) nervously looking around moving through crowds of people. Her worry is not without a reason, her husband is on a cart by her side, being pulled by his teenage sister. He has been heavily beaten up by a chief of the village. They get to a doctor’s “office”, which is a very shabby, simple place. But doctor welcomes them and we hear Qiu Ju complaining that the beating is not that bad, but why did the chief have to kick her husband “where it matters” – to the groin. The doctor gives him some medicine and recommends resting. They come back to the village and the husband just takes his situation as it is. But not strong-willed Qiu Ju – she sets to find justice.

When she goes to see the village chief, he suggests that maybe her husband wants revenge and he can kick the chief now. But that is not what Qiu Ju wants – she wants explanation; she wants justice, not revenge. So she travels to the town police office to complain to authorities. The police chief tries to understand the conflict and we get to know another detail of the story. Apparently Qiu Ju’s husband and the village chief had been arguing about usage of a part of their land. The husband wanted to build a storage unit there, while the chief said that the laws say that they have to grow crops. Eventually, the husband insulted the chief by saying that “he only grows hens” implying that he has only daughters. It is a big insult, as by traditional views only a son can continue the family line. The son’s duty is to take care of his old parents and then after their death to take care of their ancestor souls. Not having a son means that the prior generations will become hungry ghosts, as there is no one to feed their spirits and the family line will be broken.

The police official goes into the village and meets with the chief. Here his role is as a mediator rather than unbiased official. His verdict – for chief to pay the medical bills and the salary for the lost time when the husband could not work; both parties are to write self-criticism (a very common practice in communist regime). Qiu Ju comes to the village chief to get the reparations, but the chief throws the bills on the ground saying:

Every time you pick a bill, you will bow to me.

The woman keeps her dignity and says that she is not after his money. She turns away and goes back even more determined.

After this event we see her traveling again to the town official, then to the district office and eventually to the city. All that despite her obvious third trimester pregnancy. Every time she gives her complaint to a higher authority, she gets the same answer. Even her husband is already infuriated by her pursuit as she is spending all their money and more importantly, people are talking about them. “Losing face”, meaning doing something shameful, in such a traditional community is to be avoided at all costs. However, despite everything, Qiu Ju does not abandon her mission to seek for justice through eventually it does not turn out the way she expected.

Qiu Ju’s single-mindedness provides a lot of comical situations that portray the urban/rural divide. Her ventures in the city show how foreign this place seems for her. Her naïve views on the legal system are also there to show the feeling of rapid changes in China, that most of country cannot keep up with:

You mean good people can sue each other? – she asked a lawyer shocked.

Despite the comic part of it we must admire her determination and honest quest for justice and the dignity of a simple apology. However, she finds out that this is not what the modern justice system is about.

“The story of Qiu Ju” is based on Chen Yuanbin’s novella “The Wan’s Family Lawsuit”. There are some interesting differences. The main one is that Qiu Ju in the novella is not pregnant. That removes the whole part of the film story where the village chief helps her during childbirth. (Source: Materials for Qiu Ju) It sparked my curiosity, why did they make Zhang Yimou pregnant in the movie and in general, what exactly did he want to say with this film. I see three main points that stand out from the movie’s narrative.

First – the conflict between the government and individuals. If we dig deeper into the conflict between Qiu Ju’s husband and the village chief, we see that that the causes are not personal at all. They get antagonistic first because of a piece of land. Qiu Ju and her husband’s family grow chilies and they wanted to build a shed. The chief has been refusing their application for building one in common area (as they do live in a communist style communal village). Then they decide to build it in their own allocated land, but the chief refuses that as well. He explains that there is a governmental order not to build, as they need the land to grow crops. The chief is only executing his official duties.

Qiu Ju’s husband gets very angry about the situation and then provokes the chief with the remark about “growing only hens”, that is having only daughters. Another reason why this remark is so harsh is China’s one child policy for families. The remark implies that he already uses his governmental authority to avoid this law and has more than one daughter. It is being overlooked, as he is a party member, but there seemingly is a limit to how many times he can try to have a boy. Thus, the conflict is derived not from personal reasons, but from governmental restrictions on individual decisions; how to use your (assigned) land or how many children to have. We also see quite a comical scene, where a young couple has to explain to police how they met and why they are in love, to get a permit to get married. Though being funny, this situation is a portrayal of how the government is controlling every aspect of people’s public and private lives.

Second – the modern woman. Though Qiu Ju is disguised by peasant clothing and surroundings, she is actually much more of a modern woman than we are led to think. Firstly, she is defying the traditional law. China’s life has been governed by Confucian inspired principles throughout the ages. The core of this tradition is five relationships – ruler and subject, father and son, husband and wife, elder brother and younger brother, and friend to friend. The first subject has the authority and the other must submit to it. This keeps the order and balance in society. Qiu Ju defies this by not submitting to the village chief’s authority or to her husband’s opinion. At every step she challenges government authority without a question. Her individual dignity and wounded pride is more important than harmonious relationships.

He‘s a chief, so what. He can‘t kick a man to his privates – she says.

Third – the new generation. There is still a question of why did the director Zhang Yimou have Qiu Ju be pregnant. For one, it does emphasize her strong will, going against all odds in such a delicate situation. But I think there is one more nuance in this portrayal. Qiu Ju seems to be in a hurry to find justice before her child is born. China’s communist history, especially the Cultural Revolution, left the population with deep scars. Through the voice of Qiu Ju, it seems, the whole nation is asking their authorities “We need an explanation why it has been done to us and an apology”. To mend the scar and to be able to move on into modernity, they have to cope with that dark past. Therefore, I think, Qiu Ju was in a hurry on her mission, as she wanted the new generation to come into a world where individual dignity is respected. Zhang Yimou explained saying:

If you don’t ask a question, nobody will ever give you an answer. You always have to fight in order that something be done. In China, you have to try 20 times, spend years in order to solve the most minor problems. To request that something to be done is the beginning of democracy. With this film I wanted to say that every Chinese should do the same: to fight for one’s right and discover oneself in the process.” quoted from Jahiel 1992, Cohen, 2007 (Source: Materials for Qiu Ju)

When the film came out in movie festivals it instantly became a hit, winning a Golden Lion award in the Venice Film Festival (Source: Wikipedia). It must have been such a treat to peek into the world of still quite closed China. Director really lets spectators enjoy that, with long shots from hidden cameras in the streets. It is interesting that this film was welcomed by censors of the Chinese Communist party at that time. It was just a few years after Tiananmen Square protests, and the movie portrayed government officials in a favorable manner. (Source: Materials for Qiu Ju) However, hidden between the layers of narrative lays much harsher criticism than they would have ever allowed, revealing the brilliance of the director.