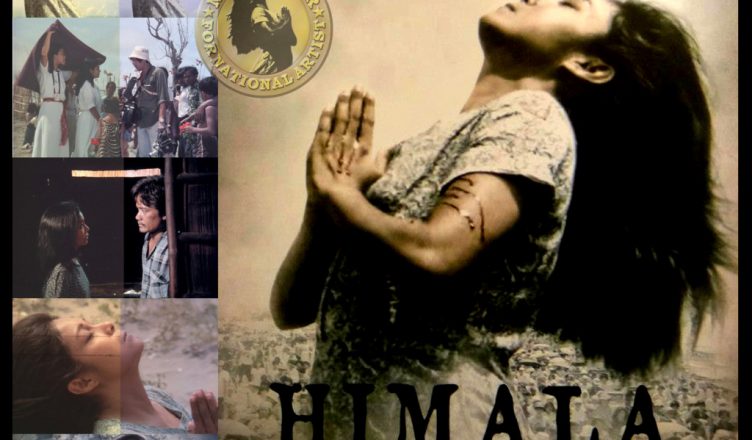 A true classic from a master of Golden Age of Filipino cinema Ishmael Bernal stands the test of time and is just as relevant to us now as it was more than 30 years ago. Chosen as a Best Film from Asia Pacific of all time by CNN Viewer Choice Awards it is a film not to be missed by any cinephile. (Source: CNN)

The film starts with an image that has became an icon – Elsa (Nora Aunor) in a praying position on a barren land in front of some dried out tree trunks during a Solar eclipse. Back home in a shed she shares with her adoptive mother that she saw the Virgin Mary during that moment. Stepmother does not believe this strange confession, nor does the local priest they go to ask for guidance. Elsa is determined and keeps going to the barren hill, until there is a rumor in the village that she healed somebody she touched. This turns things around and people from her village and surrounding places start coming to her for healing. News gets to other towns and even Manila, and we see hoards of sickly, unfortunate people, coming to see the miracle healer. The poor town starts to liven up as a lot of small businesses open.

There is a filmmaker Orly who comes to make a documentary about Elsa. Having a skeptical attitude, but actual desire to believe he follows her filming her journey. Elsa’s childhood friend Nimia comes back to town from Manila. In the Big City she had to survive by being a prostitute and came back to help her father and open a cabaret in the now very lively town. But tourists brought not only economic growth, but also the crime. Stealing, rape, even murder, falls upon town that never had these problems. We watch how things become formalized, while Elsa is in silence, she performs newly developed rituals with group of confidants.

Ishmael Bernal gives us a microcosm of humanity in the small town of Cupang. First we witness the creation of a “miracle” and power of blind faith. As a matter of fact, such Virgin Mary miracles are known throughout Christian history. One of the most famous ones with a very similar story was in France, Our Lady of Lourdes. (Source: Wikipedia) Though throughout the movie we never really see anyone being healed by Elsa, there seems to be a conduct among the believers not to see that. As a spectator of the film we clearly see that old blind man of the village, whom she was “treating” early in the film, is still blind all until the end of the movie. However, the pilgrims seem to be under a mass spell – they come to Elsa, drink her “blessed” water, which later is even being sold in bottles.

I used to say, it is always important to face the truth. Now I realize we should not let the truth blind us to a point where it dehumanizes. At times falsehood makes a better servant and can do humanity more good. But whatever we’re given, truth or falsehood, reality or illusion what matters is how we use it. – says the town priest during a sermon having changed his mind about the miracle.

What makes the whole miracle process look very legitimate is all the rituals that spontaneously sprung up around Elsa. Mostly due to her devoted Seven Apostles – people that were with her from the beginning. They dress her in white in front of Virgin Mary statue, they follow her to the barren hill of the “miracle” occurrence of Mary – all these actions become canonized. On one hand it looks quite pathetic and dishonest, but at the same time we can emphasize with these people, who strive for feeling of importance and need for something more than mundane miseries of life. If “Himala” was a funny movie, it could be compared to Monty Python’s “Life of Brian”.

However, even if we can feel some mockery in the film, Bernal keeps the tone very serious. Next thing he explores is the commercialization of the miracle. The economic burst that came with pilgrims and tourists is well exploited by locals. Hotels and little shops selling all kinds of “miracle” items sprung up. Again we are not given moral condemnation of such practice, as we can understand those poverty stricken people jumping on opportunity to make some extra income. Things get more and more out of hand – cholera strikes the town and two sons of one of the closest Elsa’s confidants die, in hands of the “miracle healer”. The other closest and most devote Apostle commits a suicide due to a disgraceful reasons that I will not reveal in this review. Elsa falls from grace and is ridiculed by the same people who were worshiping her. And all that just to be placed back to her divine status after certain coincidences convince people that “the miracle is back”.

If one would be looking for a lesson of morality or religion in this work of Ishamel Bernal, you may find a mixed message. What he provides us is inspired by existentialism, an absurd theater of human condition. All is brilliantly summed up in the last scene of the film. Pilgrims and devotees come together to the barren hill summoned by Elsa. She steps on the stage and talks into a microphone for the first time actually addressing people. Her message is strong, but not exactly what those sick and poor were willing to hear:

When something terrible happens, we blame it on a curse. When something good happens, we give credit to the heaven, to the Virgin, we say it’s a miracle! I have something to confess. There are no miracles. It is all inside us… We make miracles ourselves… We pronounce the curse… We create the gods…

Before Elsa manages to finish her speech she is shot by an anonymous person. Panic falls onto the crowd and we see people running, screaming, the blind and the disabled falling and being stepped on by others. A hell on earth opens. But soon things get settle and people cry for their lost miracle healer. They carry her dead body and as soon as it is gone the belief is even stronger:

She died to remind us what a sinful world it is. Let us go back to the shrine and pray for her soul. We must sustain her faith. Let us be devoted to the Blessed Virgin., – talks one of her confidants.

People walk kneeling to the place of the “miracle” just to remind us that there is no saint like a dead saint. This is probably one of the most powerful scenes ever put on film, it immortalizes this masterpiece of cinema.

The film’s script was written by an award-winning famous screenwriter Ricardo Lee. Quote from the book “Reviewing Filipino Cinema”:

Lee has confessed that Himala is his most personal screenplay in which he invested so much of himself – politics, ideals, doubts, visions and repressed childhood memories. (…) Lee pointed out: “The material originated with me, not with any producer. If it had been an ordinary producer, we might have been asked to provide Nora with a love interest and required the story have a happy ending. We might even be ordered to make a miracle really happen.”

The film was produced as a project of the Experimental Cinema of the Philippines (ECP), established during Marco’s regime. (See more about this topic in the article Filipino film history) It was made on a budget of only 3 million pesos and shot in a span of three weeks. (Source: Wikipedia). This proves again that it is a great story of a scriptwriter and a masterful eye of a director, not special effect and huge budgets, that make a film immortal.

For a final note I will add something more uplifting, but also full of absurd. I do recommend seeing “Life of Brian” by Monty Python – though the tone of the film is very different, they both deal with the same issues. But my example is actually from a literary creation known as “Hitchhiker’s Guide to the Galaxy”, another great masterpiece of absurd:

The Final Proof of the non-Existence of God was proved by a Babel Fish.

Now, it is such a bizarrely improbable coincidence that anything so mind-bogglingly useful could have evolved purely by chance that some have chosen to see it as the final proof of the NON-existence of God. The argument goes something like this:

“I refuse to prove that I exist,” says God, “for proof denies faith, and without faith I am nothing.”

“But,” says Man, “the Babel fish is a dead giveaway, isn’t it? It could not have evolved by chance. It proves that You exist, and so therefore, by Your own arguments, You don’t. QED”

“Oh dear,” says God, “I hadn’t thought of that,” and promptly vanishes in a puff of logic.

“Oh, that was easy,” says Man, and for an encore goes on to prove that black is white and gets himself killed on the next zebra crossing.