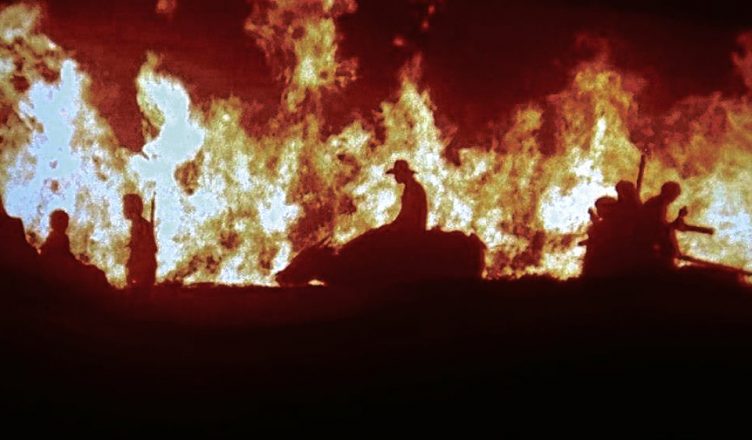 “Oro, plata, mata” is a war story much like “Gone with the Wind”- it’s not a story from the battlefield, but of those in the periphery strongly affected by the malice of war. The film title itself provides us a blueprint of the film. Oro means gold, plata means silver and mata means bad luck. It refers to an old Filipino superstition that design elements in a house, especially staircases, should not end in elements of three. (Source: Wikipedia). The film is accordingly divided into the three parts. We meet our main characters, the upper-class families of Ojeda and Lorenzo during a lush “Gold” stage. The first minutes of the film are spent with the camera showing different parts of a luxurious mansion, and the beautifully dressed people dancing and having fun. We get a peek at Trining Ojeda’s first kiss in the garden with her childhood sweetheart Muguel Lorenzo. The signs of war are there too – some young enlisted men are wearing uniforms. They also tease Miguel Lorenzo about not going to army, due to his overprotective mother. Some older men are discussing war issues. Most of them are quite smug and self-assured, saying that the war will be short. Only the old Ojeda suspects the real potential of the threat and starts making his plans. The cheer is broken by the news of the fall of Corregidor to the Japanese and the party dissembles.

Enter the “Silver” period. The Lorenzo’s invite the Ojeda’s to join them in their provincial hacienda, to get away from the war. Still surrounded by luxury and servants, they play mahjong and keep the reality at bay. However, once again reality comes knocking on the door and they have to flee quickly to a mountain retreat of Lorenzo’s and start the “Bad Luck” period. For some time the place seems peaceful and enjoyable. Children play in nature, swim in water streams, while servants prepare all food, all in the backdrop of wilderness. But war catches up again. First they are visited by guerrilla fighters. Families take care of them, treat their wounds and Miguel has to give up his precious telescope for the benefit of the fighters. Real bad luck strikes when the Ojeda household superintendent, Melchor, turns against them. He tells the ladies in their face the he is tired of being treated like a slave while they play mahjong and add nothing for their own survival. Later he comes back with some other rebels and kills off the other servants, takes the treasures and food, mistreats the ladies and takes Trining Ojeda with them. The revenge in the form of a massacre is served to them later, delivered by a manned-up Miguel and a guerrilla fighter. The film ends in a positive note – the war is ended, life’s go on, but they will never go back to the innocence they had before.

A lot of things happen in the three hour film experience. It is interesting to watch the characters and how they change when circumstances change. Miguel goes from an innocent mama’s boy, to a man who was initiated into masculinity by committing a massacre. Trining from a pure girl turns into a manipulative sexual predator. We see how spoiled ladies get stronger when their survival is at hand.

However, “Oro, plata. Mata” does not dive deeper into the darkness of the human soul. There are a few gory parts in the film, like one scene with disfigured corpses in the forest. Though by far the most cruel scene for me personally was one where the guerrilla Mercurio brutally kills a wounded Japanese soldier asking for help. Another part that seems incomplete is the post-war change of characters. Trining expresses “The war has turned us into animals”, though on the surface there is no evidence of that. Actually, her actions in the film, especially going off with the rebels and then protecting them and not wanting to be saved, are a mystery to me. If you would be looking for “Lord of the Flies” level of human darkness, it is played down in “Oro, plata, mata”.

Another conflict that the film missed out on was exploring more is the topic of class struggle. Rebelling servant Melchor brings up a good point – while the snobbish and spoiled upper-class are living a careless life, it is the servants who have to break their backs to tend to their needs. They are not even being recognized for this or rewarded in a significant way. It is just naturally assumed that things must be this way and servants are second class people. While the director does poke fun at upper-class snobbism, especially through utterly annoying character of Viring, there is not a much deeper look into this social reality. As blogger Noel Vera expressed it in his blog “Critic After Dark”:

Melchor comes practically out of nowhere to shake the roots of the Lorenzo’s and Ojeda’s deeply rooted, long–established balete tree with a force even the Japanese could not muster; the script’s failure is to capitalize on that tremor, to show us the darker side of upper-class Negro society as it exploited peonistic servitude to fund its high-maintenance lifestyle. (Source: Critic After Dark)

In 1983 Urian awards “Oro, plata, mata” was competing against Ishmael Bernal’s masterpiece “Himala” and won. Though I do think “Himala” is superior as a finished cinematic experience with a strong impact, nonetheless “Oro, plata, mata” is superb. As Alfred A. Yuson, member of Film Ratings Board, exclaimed that it easily enters the top five of the best-Filipino-films list. (Source: Manunri.com)