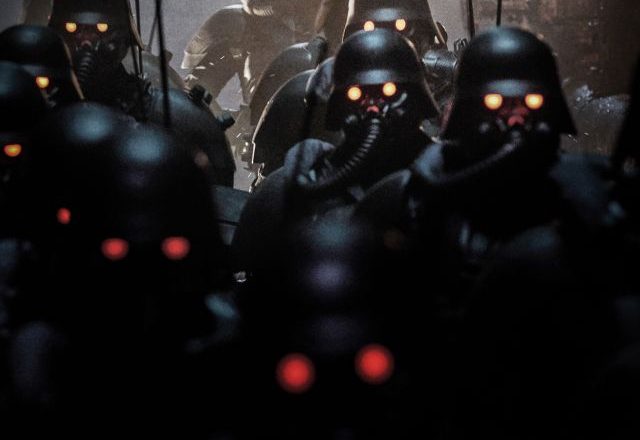 Illang has a lot going for it – the original anime created by the legendary Mamoru Oshii (Ghost in the Shell), a fascinating topic, great CGI and costumes, and a talented director (A Bittersweet Life, The Good, The Bad, The Weird). However, it fell short of a good movie and can only be placed into the passable movie pile.

The premise of the film is fascinating – it’s the year 2029 and both Korea’s are getting ready for reunification. As any such large political decisions that have enormous ramifications, it’s not welcomed evenly by the public. A terrorist group called “The Sect” arises and is violently opposing the reunification. As a response, South Korea forms a special military unit Illang (Wolf’s Brigade) to fight them. However, there are forces within the government that don’t want this group to exist. In the midst of this political drama, we have a love story between two conflicted characters. Then things get complex, very complex.

Some movies try to bite off more than they can chew by taking in too many topics and trying to have too many parallel stories. This results in a watered-down story that doesn’t really say much – things happen, then more things happen and then it ends. This is how I feel about Illang – it didn’t know what it wanted to say and was trying to say too many things at the same time. More than that, the stories did not seem to fit thematically much – the love story just hung there as an attempt to put an emotional core into the film but it felt artificial. And the really interesting and potent topic of reunification fear and resistance was left as shallow background for other events. Paired with mediocre performance and a confusing plot, it’s not a satisfactory film.

It’s a real pity that the movie fails substance-wise, as otherwise, it is a true visual masterpiece of a cyberpunk genre. If you’re a fan of the genre, the film is worth at least taking look at (available on Netflix).