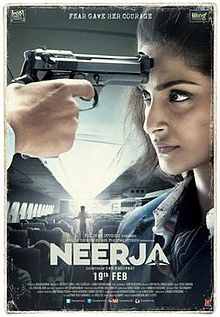 On September 5th, 1986, Palestinian terrorists hijack Pan Am flight 73 while it waits on the tarmac at the Karachi airport. The head purser of the flight, Neerja Bhanot, tries to keep the passengers safe by negotiating with the terrorists and trying to outwit them. Based on a true story, this movie depicts how Neerja became an international hero by saving the lives of most of the passengers and crew, while dying herself.  Meanwhile, we see the emotional fallout at home of knowing that your daughter, sister, or girlfriend is in mortal danger – and there’s nothing you can do to help her.

While this could have easily become melodramatic, the powerful performances of Sonam  Kapoor as Neerja and Shabana Azmi as Neerja’s mother imbue this film with the right mix of tension, fear, and bravery to make it one of the most lifelike and emotionally complex films I have ever seen. I think this is the only movie that has left me bawling in my seat at the movie theater, and I daresay you will have a similar experience.

While it doesn’t go into great detail, the movie does explore Neerja’s history of surviving intimate partner violence. After having an arranged marriage, she is taken to Oman by her husband, who proceeds to verbally and emotionally abuse her – finally escalating into physical violence. Part of this abuse is letters sent to her father demanding that he give more money for her dowry.  When Neerja escapes from this terrible situation and returns to her parents’ house, she has to deal with the social and familial censure of her actions. As a woman, she should have been able to accept and adjust to any situation, or so the logic goes. Neerja bravely perseveres in doing what is right for her: getting a divorce, picking up her modeling career again, joining PanAm as a stewardess, and just generally creating a new life for herself.

These experiences have made Neerja tough. As the movie shows in flashbacks related to the hijackers’ actions, Neerja knows how to react to someone screaming at her, for example, or how to reason with unreasonable people. She knows how to hold her ground and be assertive while still not being threatening. This experience is a large part of what makes her equipped to save the crew. And she is just 22 years old.

The emotional fallout at home

While Neerja is trapped in a hijacked airplane on the tarmac in Karachi, her family is in Mumbai, waiting for news by the phone. Her mother’s reaction to the stress and terror of those hours is incredibly real, and without doubt one of the most stunning performances I have ever seen. She is physically shaking, and denying that anything will happen to her daughter. She goes into Neerja’s room to straighten it up, and to look for a special ring that had gotten lost the night before. Then she goes to the market, to buy the dress that Neerja had wanted for her birthday. By these small actions, she tries to control her fear in the hope that it will somehow help her daughter come home alive. Shabana Azmi does a fantastic job of showing these emotions, and it was her powerful acting that really made me cry.

This movie is an incredibly tight narrative with wonderful acting. It shows the bravery of one person who stands up to violence and the terrible tragedy that happened to her family. It also conveyed an important feminist message: your daughter has greater potential than you can ever know. Neerja’s mother did not raise her to be so brave; she became that way on her own.

I cannot recommend this movie highly enough. Be sure to bring tissues.