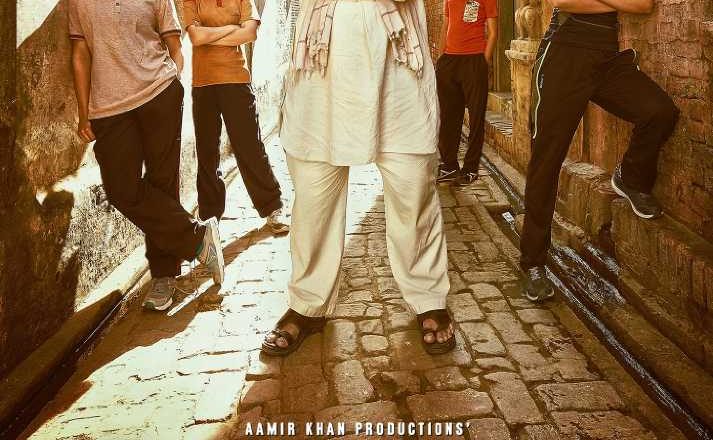 After he is forced by financial circumstances to give up his own wrestling career, Mahavir Singh Phogat plans to train his future son(s) so that they will win a gold medal for India on the international stage. When he ends up having four daughters, he thinks his dream is lost – but then he has the radical idea that girls can be wrestlers, too. After many years of intense training, he manages to bring two of his daughters, Geeta and Babita, to the international level. But will his old-fashioned, village methods work against athletes from around the world?

This movie tells the true story of Geeta Phogat, the first Indian woman wrestler to win a gold medal at the Commonwealth games (in 2010), her sister Babita Kumari, also a gold medalist, and their father who coached them to greatness.

This film does a good job of showing the cultural context and why, exactly, this family is so remarkable. Mahavir and his family live in a village in rural Haryana, India – a state known for its poor treatment of girls, and high rates of female infanticide. Haryana has one of the worst sex ratios of any Indian state: 861 women for every 1000 men in the whole population, and 835 girls for every 1000 boys aged 0-6 years. Patriarchy, especially the wish for male children to carry on one’s legacy, is particularly strong. The movie demonstrates this cultural pressure for male heirs through a humorous sequence, in which Mahavir receives innumerable bits of advice on how to conceive a male child. In the end, it seems to be a catastrophe for the entire village when all of these efforts fail and Mahavir’s wife continues to have girls.

Women in Haryana are often married off at a young age; the movie, in fact, shows the marriage of Geeta and Babita’s friend at the age of 14. Girls are usually taught to do housework and cook; schooling is optional, and other careers are considered unnecessary. In this patriarchal context, Mahavir’s decision to train his daughters in the male-dominated sport of wrestling is met with both scorn and pity. Geeta and Babita are teased at school and by people in the neighbourhood, especially when they are made to run and practice in shorts (showing one’s legs is considered to be immodest for women in India). They are refused entry to the community wrestling ring in the name of protecting their modesty, and the same argument is made to prevent them from competing in rural wrestling tournaments. Rather than caring about whether his daughters will be marriageable or not, Mahavir does something completely radical: he forces the tournament organizers to let his daughters compete.

The importance of his attitude and actions cannot be understated. Both in the film and in real life, Mahavir helped to change the culture of Haryana and India in general by demonstrating that girls have every right and ability to pursue a career in traditionally male fields. In the context of Haryana, this is a very radical – and some would say feminist – action.

Mahavir’s perseverance in the face of financial difficulties was striking. This family is not wealthy: for example, he negotiates with a vendor to buy chicken for the girls, which would normally be far too expensive. It is lucky that they have some land, since Mahavir ends up quitting his reliable office job and taking up farming so he can focus on the girls’ training. It is truly remarkable that he managed to impart such excellent training in these circumstances.

When the girls move to the national level, his training and abilities are called into question by the coach of the National Team. Despite his obvious accomplishments, he is dismissed as a country bumpkin with old-fashioned methods that will not work at the international level. This is an example of classism, which is rampant in Indian society. By confronting this attitude, the film argues against this idea that you have to be from a particular strata of society if you want to do anything worthwhile.

A feminist film? Sports and abuse

Many people have stated that this is a feminist film; in fact, the government even exempted it from taxes in several states to encourage people to imbibe the pro-women’s education and anti-female infanticide lessons. While it does make a lot of points about women’s rights and ability to do things that are traditionally “male,” there is one crucial aspect of feminism that is missing: Consent.

At no point does Mahavir actually ask Geeta or Babita if they want to take up wrestling! In fact, they believe it is a punishment for beating up some boys. While Mahavir does discuss the idea with his wife, she doesn’t have much say in whether the girls will be subjected to the training. Her husband’s persistence means that she finally has to agree despite her misgivings.

This is particularly problematic when the training crosses over into child abuse. Mahavir makes the girls: swim in freezing water; give up fried and sweet foods; get up at 5 AM to train before school; drink large glasses of milk; run instead of watching television; and so on. The worst and most abusive part is when he decides to cut off their hair despite their protests, which even the barber is hesitant to do. Having long hair is particularly important for women in India, so by cutting their hair he essentially removes their femininity.

Because of this absence of consent, I would be hesitant to call this film “feminist.” However, it does provide a good character study of a father who is so insistent that his children fulfill his own dream that he goes beyond the bounds of what is right.

I highly recommend this movie, which I believe is one of Aamir Khan’s best films. The film is full of unique physical effects: not only did Aamir Khan drastically change his physical appearance (he went from 37% to 9% body fat!), but all of the actors intensively trained in wrestling with one of the National Team coaches. This training shows, as the actors all do their own stunts and no stunt doubles were used.

Something that was left out of this film is that Mahavir trained his two younger daughters and two nieces as well as Geeta and Babita, all of whom have gone on to win national or international medals. This is an excellent sports movie/biopic – which is high praise coming from me, since I don’t usually like sports films.