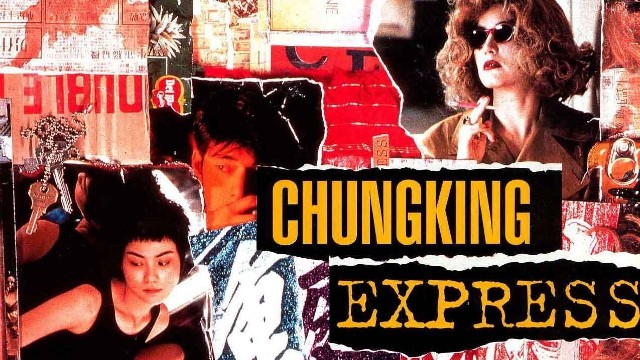 “Chungking Express” is another highly regarded film by Wong Kar-wai (“2046”, “In the Mood for Love”). The film was made while Wong was still editing his other wuxia piece, “Ashes of Time”. He mentions:

When I started to film, I didn’t have it written completely. I filmed in chronological order. The first part happened during the night. I wrote the sequel of the story in one day! Thanks to a brief interruption for the New Year festivities, I had some more time to finish the rest of the scrip (Source: Wikipedia).

Watching “Chunking Express,” you can really feel that the stories are floating, light and relaxed.

The movie follows two stories, one about Cop 223 (Takeshi Kaneshiro), and other about Cop 663 (Tony Leung). Both stories are about love, and connected just by an accident of 0.01 cm.  The cops were left by their loved ones, and now they have to deal with the pain. Moreover, in this crowded city where you encounter people all the time (sometimes as close as 0.01 cm) it is so difficult to find a genuine connection.  To live through his sorrow, Cop 223 keeps buying cans of pineapples each day with the expiration date of May 1 (both his birthdate and May being his ex-girlfriend name). He ponders whether everything has an expiration date, and why people are so appalled by things that have expired.

Cop 663 reflects his sorrow through the things in his apartment. He lives the pain through a bar of soap and a huge stuffed animal. He is so much in his own world and pain that he doesn’t notice how his apartment is gradually changed by a California-dreaming woman, Faye. She is in love with him, and tries to get him out of his rut by making small changes in his living space.

The stories themselves are not as important as the way they are told. “Chungking Express” is like poetry of cinematography, yet another masterpiece envisioned by Christopher Doyle. It is in the colors, camera angles, details, soundtrack, and atmosphere that it portrays the actual feelings and thoughts of the characters. If you watch the movie, just let it capture you, and go with the magical flow. The soundtrack really helps this magic. I am being biased here, but the movie with its soundtrack reminds me of Blade Runner: the urban spaces, busy cityscape, and the loneliness in the crowds. The Chinese title actually translates to “Chunking Jungle,” a reference to Hong Kong as a concrete jungle. The people there are wandering, trying to find something, and passing by each other as close as 0.01 cm apart. Since it is cinematographic poetry, “Chunking Express” is better seen than told about.