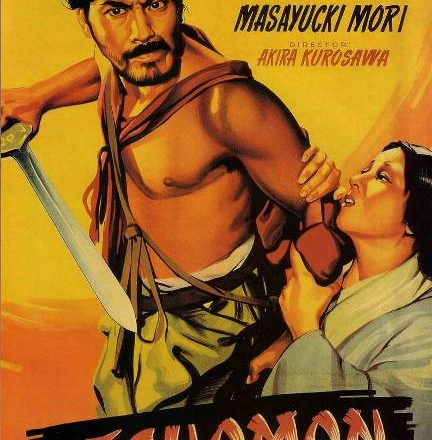 “Rashomon” (The Criterion Collection) on Amazon.

I think it is fitting that my first Japanese movie to review would be one made by the master filmmaker Akira Kurosawa.  Rare Asian films go to the top of IMDB list, but there are a few by Kurosawa. One of them – the masterpiece “Seven Samurai” always stays in top 20. “Rashomon” is also highly rated and is certainly one of my favorite movies.

Movie is based on a novel by Ryunosuke Akutagawa, one of the most famous Japanese authors (whose life could be a good script for another movie…). Story is told in an earlier cinematic style, more theatrical, closer to silent film, as the director really admired silent era movies. In the film three characters take shelter from rain in ruined temple – a woodcutter, a priest and a commoner. Woodcutter starts telling a horrible crime story they heard about in court.

“This time I may finally lose my faith in human soul”, – says the priest, creating a build-up for the story itself.

A samurai was found dead in the forest and we witness this event told from four different perspectives: a famous bandit Tajomaru (played by also famous Toshiro Mifune), samurai’s wife, the samurai (his soul mediated though his wife’s body), and bystander. Each tells very different story with nuances that show the storyteller in better light.

“It’s human to lie. We can’t even be honest with ourselves”, – says the commoner.

“Rashomon” touched a lot of existential topics: the frailty of human life – does it really depend just on whims of fate and such small circumstances as a wind breeze; the uncertainty of moral values – virtues of samurai or faithful wife, how much are they a pretend social play and how easily it can be disturbed when put to a test; are the negative emotions such as desire, greed, jealousy, pride, all that played a part in the story, the ones that occupy and control human heart. My favorite philosophical question there is the nature of reality. This question has been addressed by philosophers throughout the ages – is objective concept of reality possible. And variety of answers for this question is fascinating.

Buddhism, for example, traditionally states that whole world is just an illusion. There is an interesting Zen Buddhism story (and Zen is most popular school in Japan) I like, that talks about nature of reality and the real truth of Zen. Patriarch monk Gunin had to choose his successor and held a poetry contest – the verse that will reflect the truth will win. Chief monk of the monastery wrote in nice calligraphy:

The body is a Bodhi-tree
The soul a shining mirror:
Polish it with study
Or dust will dull the image

Patriarch Gunin liked the poem, but asked the monk if he could write another one. In the same monastery was a kitchen worker Yeno. Since childhood he was inspired by Buddhism, but had no money for education, therefore was illiterate and had to work a lowly kitchen work. After seeing chief monk’s poem, Yeno though of a reply and asked another monk to help him write it on the wall. :

Bodhi is not a tree;
There is no shining mirror.
Since All begins with Nothing
Where can dust collect?

Master Gunin saw the poem, found out who wrote it and chose Yeno as a successor. However, he advised Yeno to run away from the monastery, as other monks would never accept a kitchen worker as a patriarch. (Source: prof. Grant Hardy lectures from The Great Courses) His poem reflected the truth that even the words and concepts in which we explain Buddhism are not real, just an illusion. As all is nothing we cannot explain it by something. From here we can go all the way to quantum physics, the observer effect and Schrodinger’s cat, some mind blowing facts of physics about uncertainty of reality… Well, it is not exactly in the movie, as it speaks about this topic more from human morale perspective. But, nevertheless, it is connected.

The other important thing in movie, I think, was the scene where the dead samurai would speak at court through medium – his wife. That can be taken as symbol of the whole narrative – we experience the world through one or other medium. Even when we experience something ourselves, the understanding of it is shaped by our past experience and many other factors. And the in the movie the stories are told by woodcutter and monk, who heard them in the court, and eventually the viewer sees it through the medium of the film. And now you are reading about this film using your device connected to the Internet… Thus trying to catch the “real truth” is something futile like trying to catch the shadow in Plato’s cave.

“Rashomon” is a monumental film, a must-watch for film fans anywhere.