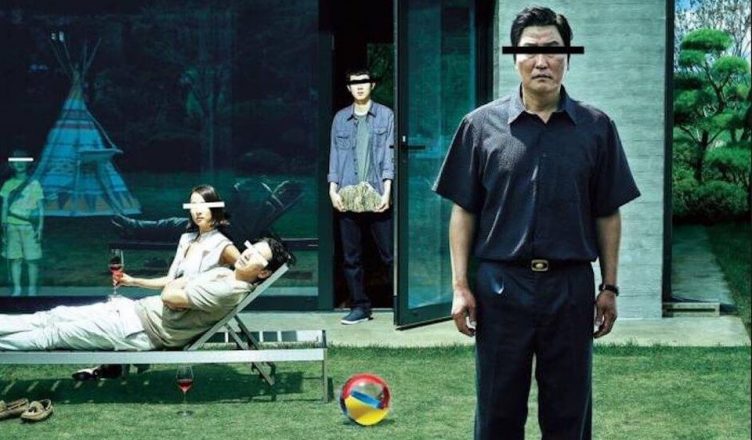 Please note: This article contains spoilers for Parasite right from the offset.

In keeping with the tradition of Roman satirical tragicomedies, 2019’s Palme D’or winner Parasite, the latest movie from celebrated film director Bong Joon-ho, is an exhilarating 132 minutes-long surrealist commentary on social mobility. Already regarded as one of the most critically and commercially acclaimed Korean movies of all time, it narrates the ingenious schemes of a sympathetic family in their futile pursuit for social status and wealth.

One of Bong’s greatest accomplishments in this tale is how he dodged all the ideological pitfalls that less experienced and artful auteurs tend to disregard. Although there are moments of caricatural characterization, Bong never falls into manichaeistic depictions – no character is portrayed as being inherently good or evil. Likewise, the decision to raise the issues of inequality and social mobility never comes across as having been made in a premeditated fashion. Rather, it feels like this is a byproduct of a well-told story that never stops trying, above all, to be fun. It turns out seeing people acting humorously cheap is as funny in Seoul as it is anywhere else. Humor, and black humor, in particular, has the power to disarmingly tackle taboo issues, and Parasite, does this with particular sophistication. To read the movie as a social critique is as misguided as watching Lynch’s Inland Empire looking for a Jungian lesson on archetypal psychology.

Curiously, Bong majored in sociology at Yonsei University. Were his most recent movies not to blatantly approach social issues, namely sci-fi Snowpiercer (2013) and ecologically-minded action movie Okja (2017), and this may have passed by as an irrelevant piece of trivia. In Parasite, however, the sociological standpoint of the director is in the foreground more than ever. While there are a few socioculturally-specific references that may make a Western audience feel ever so slightly lost in translation, there’s a sense of relatability throughout the movie that speaks volumes about the quasi-universality of the social dynamics depicted. When closing an eye to the exoticness of local mannerisms and the peculiar architecture depicted, one could be excused for thinking it’s watching a family from the old continent. To dismiss the pertinent sociological questions raised in the movie due to its geographical remoteness would be thereafter, hasty.

Georg Simmel, one of the biggest names of the first generation of German sociologists, introduced in the 19th century a unique sociological category that perfectly describes the psychosocial gap existing between the two families: “The Stranger”. Both sides follow a set of social norms that maintain a psychological distance which makes the Other far enough away that he is unknown yet close enough that it is possible to (superficially) get to know him. Conscious or not of this key sociological concept, Bong developed a relationship between the two main families in which each sees one another through the lens of the Stranger’s defining characteristic: Otherness.

At the very start of the movie, the lead working-class family is introduced as living in a subterraneous apartment, hidden from the eyes of the world. Not long after, it’s discovered this is the case both literally and figuratively. The word “metaphor” is even repeatedly pronounced by the son in evident self-referential meta moments. Geun-sae, the husband of Moon-kwang, the housekeeper at Park’s residence, lives even further away in a hidden bunker where ambitions of social mobility have been entirely relinquished by shark loans and where blind respect for the Park family abounds. Here, there’s no room for the servants to aspire for anything beyond survival – they are the apathetic lumpenproletariat.

Disenfranchised and forever at risk of unemployment/underemployment, Moon-kwang and Geun-sae are conformed with their status. Unlike them, the lead family possesses an unusual amount of cultural capital considering their milieu and is happy to use it to shake things up for themselves. These assets are ultimately the differential factor in their eventual fate. Far from being devoid of talent, they are machiavelically capable of deceiving the Park family and playing with their shallow, elitist, ambitions and desires. After all, Ki-woo genuinely speaks English and Ki-jeong has an undisputed talent for theatrics, two skills without which they couldn’t have hoped to build the façade needed to get each member of the family a job in the Park household. Additionally, the family has a sociological imagination that would make C. Wright Mills proud, which allows them to understand the social game they have to play in order not to raise suspicion.

This is very telling of what the movie expresses at its core on an ideological level: the impossibility of structural macro changes in the social and economic system. Unlike in Bong’s Snowpiercer, the path undertaken by the lead characters to ignite change in their personal realities is not to propel collective revolution but to tweak social norms for their self-interest. The family’s well-being is prioritized over fears of “causing a stir”. To be sure, they do not think twice about causing harm to people of a similar social position to theirs in their struggle for self-preservation. Moon-kwang, like the driver, are easily discardable pawns in their game. When seeing his fellow neighbor struggling to unstuck his motorcycle in the middle of the storm, Kim Ki-taek, the father, does nothing but rush to his flooded apartment. There’s no such thing as class consciousness.

Importantly, this heavy storm represents an important shift in the narrative in that it emphasizes its conservative dimension. Things go back to “how they should be” as the family starts losing control over the situation they got themselves into. Resentment, misunderstanding and mutual distrust start to build. As the illusion of being capable of tweaking the rules of the game in their favor shatters, these three typical elements of cross-class interactions, become part of their new normality. The climax is reached when Kim Ki-taek who can longer tolerate the perceived inhumanity of Mr. Park fatally stabs him. In need of running away, Kim Ki-taek, finds himself living where the now-dead Geun-sae called his home for years. Like him, he resorts to Morse code as a desperate way of establishing a connection with civilized society – as a way of keeping his voice heard inconspicuously. While trying to rise above his social strata he ended up becoming an even less visible Other to the outside world.

The “ghost” seen by Park’s little boy, which is found out to be nothing more but Geun-sae’s indecent silhouette, represents his family’s fear of falling from the social ladder and being faced with a reality which they abhor. This psychological distance between the Park family and their employees is also the source of curiosity, namely of sexual nature. Fantasies, which are known to be rooted in the desire for transgression and the unknown, find fertile soil in their obviousness of the hardships of the common man. In practice, the Park family actively prevents giving any room for social upheaval. Honesty, humility, and submission are the three characteristics Mr. Park reveals looking for in his employees – all essential ingredients for the perpetuation of the status quo. The instinct for self-preservation, it seems, is not unique to Kim Ki-taek’s family.

There is, nevertheless, a silver lining in the pessimistic ideological narrative presented. Change is seen in the end as being ultimately possible for Ki-woo even if at the great cost of a dead sister and a subhuman life for dad. Indeed, the rigidity of the class structure has to be questioned very early on when the friendship between Ki-woo and university-educated social gatekeeper Min-hyuk, appears to be enough to open the door to mobility – even if the path to be undertaken is anything but conventional. When offering a “lucky” rock, Min-hyuk is in fact symbolically passing on the dream of upward mobility to Ki-woo. Once the boy commits himself to earn as much money as needed to buy the house (i.e. the “normal” path to climb socially), he puts the rock in a river, where it belongs. Like the rock, he now is where he should always have been – integrated. It’s discovered by Ki-woo at that moment that it is not enough for him to comprehend how rich people behave; he needs to become like them if a satisfying life, one where he can provide for his dad, is to be achieved.

This concluding ideological message perfectly depicts a society where a great number of people agree with the Marxist critique of capitalism yet no longer know where to look for a valid option. This disbelief in the power of collective action is a sentiment echoed in renowned pop philosopher Slavoj Žižek’s assertion that there are no viable political alternatives to unbridled capitalism. By creatively tackling current politico-sociological debates while remaining immensely entertaining, Bong does a great service to the resurgence of a critically analytical attitude in pop culture in line with auteurs of the pedigree of Luis Buñuel and Pier Paolo Pasolini.

Captivating storytelling aside, there are numerous tasteful details that help Parasite rise above most, if not all, previous Bong movies. Neither the illness picked by the family to accuse Moon-kwang of suffering nor the fruit which she’s allergic to was an arbitrary choice by the director, for instance. Tuberculosis has a strong history of stigma as a result of its association with malnutrition, poverty and low social class while the peach is traditionally seen in Korea as the fruit of happiness, riches, and immortality (Mary Choate & Aaron Brachfeld’s At Home in Nature, 2015). Also easily overlooked yet equally important, is the role played by the internet and mobile phones in both transcending and alienating the family members from their mundane precarious reality. Such details contribute to the composition of a rich canvas of symbolic elements that constitute the character’s class identity. Thankfully, they never come across as pretentious afterthoughts.

Ultimately, Bong achieved in Parasite what few other movies have – to artfully reveal the illusions that surround us and help us understand the world as it is. In an eye-opening exercise on how seemingly innocent actions are driven by ideology, the audience collectively realizes it might have been too quick judging who the parasites were in the story. Beyond the clutter, cockroaches, wine and the tipi that provide the backdrop to the two families, there’s a dramaturgical complexity that rejects impulsive stereotyping, generalizations and name-calling. While those looking for a coherent moral framework may leave the cinema disappointed, those who accept Pararasite’s ideological murkiness will find themselves rewarded with one of the most challenging socially-conscious works of the decade.

Simmel, Georg (1950) The Stranger. The Open School of Ethnography and Anthropology. Available at: http://www.osea-cite.org/tourismworkshop/resources/Simmel_The_Stranger.pdf [Accessed: 5 September 2019]

Bio:
Paulo Guimarães is a cinephile concerned with issues of transcultural communication and contemporary European cinema. Apart from having written for Vice Portugal and Young European Federalists, he lived and worked in eight countries around the globe.