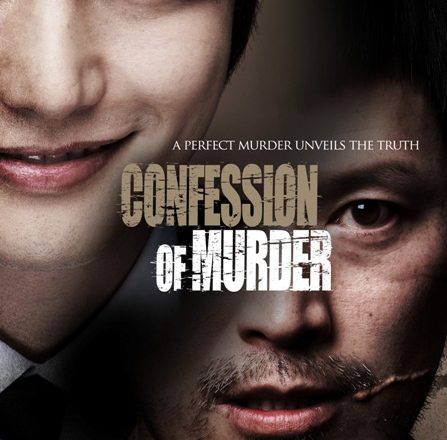 “Confession of Murder” on Amazon.

Most popular Korean films made for international distribution tend to be about vengeance, murder and injustice. “Confessions of Murder” follows the trend by developing a dark story around a serial killer case. The tensions between justice and crime, one killer and one detective, are highlighted, placing this film among other great South Korean works of this genre such as “Memories of Murder” and “The Chaser”.

From the first moments of the movie, the viewer is transported into thrilling action. The evening calm at a Korean eatery is broken when a strange masked man breaks in, shattering glass and attacking the detective, Choi Hyeong-goo (Jung Jae-young). The fight scene between them and the chase scene that follows are impressive, with complicated first-person camera shots and acrobatic jumps (an element taken from computer games). Choi knows the masked man is the killer he has been after, but he fails to catch him. The killer leaves the detective with a scar, promising to appear again

“I still need you for later”

The story fast-forwards 17 years, and we see Detective Hyeong-goo is now an alcoholic, still obsessing about his old failed case. Coincidentally, the statute of limitations is expiring along with the detective’s hope to ever prosecute the killer. At this point, Lee Doo-seok (Park Si-hoo) enters the scene, claiming to be the serial killer and publishing a book I am the Murderer. Doo-seok gains extreme popularity and a following with his “killer smile”, pretty boy charm, and claims of atonement for his sins. Young females are especially drawn to him. Although the book contains a lot of genuine murder details, Detective Hyeong-goo is very doubtful that Doo-seok is the real killer, thinking that this man just wants to cash-in on the infamy of the crimes. Tensions escalate further when the families of victims come onto the scene, and we find out that the last victim, whose body was never found, was Detective Hyeong-goo’s fiancé.

Without revealing too much, I will say that the plot twist in the film is a real bomb. The story keeps you guessing all the time: “Is he the real murderer,” “Is he really atoning,” None of this can prepare you for the punch line. For the film to have the full effect, I recommend watching it before reading reviews to avoid spoilers.

Feelings of injustice and powerlessness are underlying emotions in this film. The murderer stands before your eyes admitting his crimes while gaining fame and money from it. Despite this, you are powerless to do anything, as the law states that this man can no longer be persecuted for his past crimes. The topic of the “just man” being entrapped by the same justice system he defends has been explored before in movies. A superb example could be “Fracture” with Anthony Hopkins and Ryan Gosling. A cunning man plays the system and blatantly mocks justice. “Confessions of Murder” returns to the same topics of Park Chan-wook’s “The Vengeance Trilogy”: Does a person have the right to revenge in such circumstances? “Western culture has largely come to terms with the idea that vengeance is no basis for a system of justice” says Jonathan McCalmont in Ruthless Culture (Source: Ruthless Culture). But how can we say “it is justice” in the situation of “Confession of Murder” when it seems so intuitively unjust to any reasonable person? It keeps you waiting eagerly for justice to be served, even if it places the righteous person outside the law.

Another well-played element in the movie is the mockery of pop culture following and obsession with media ratings. Doo-seok gains immense popularity among females in the whole country, despite him being a serial woman-killer. All he needs are good looks and a charming smile (Jon Lajoie comedically tackles a similar topic in his own way – watch on YouTube). TV people only care about ratings, even if human lives are in danger, as long as it increases viewership. I like the scene where they interrupt the speech of a grieving mother who had lost her daughter to the knife of this killer just to take the camera outside for another developing event. There is also an iconic character, Doo-seok’s PR lady, continually assessing his behavior and advising him how to get higher book sales.

Even with all the positive elements, the movie frequently falls flat, and I would not count it as one of the film greats. The movie succumbs to the lure of unnecessarily extravagant car chase scenes over substance. The last victim’s family seems obscure and like characters from another much lighter movie. They seem to have been unwisely added for some awkward and misplaced humor. I assume it was an attempt at a mixture of genres, but it could not maintain the delicate balance like other cult Korean movie “Memories of Murder” did successfully. “Confession of Murder” would have been much more powerful if it had kept focused on the main plot and psychological aspects. It seems to be a case of the film creators being afraid to make it too dark, aiming instead to please a more diverse audience for higher box office sales. It makes me wonder if those were the decisions of the director Byeong-gil Jeong himself.

Even though it cannot be considered a great movie, “Confession of Murder” is an interesting and unique addition to the South Korean vengeance genre.