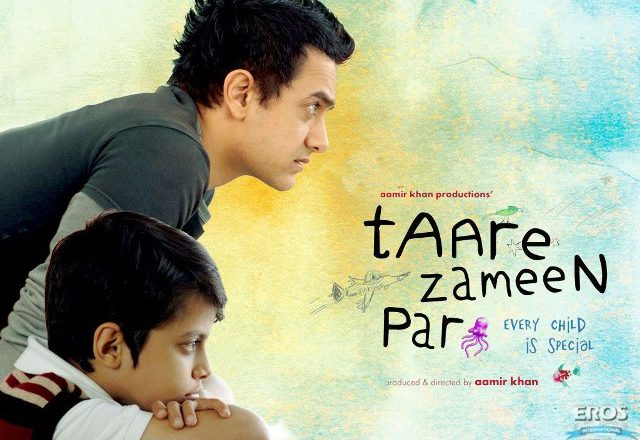 Aamir Khan’s directorial debut, “Taare Zameen Par” (Every Child is Special), is a very touching film that can make one cry and smile at the same time. Based on a script by Amole Gupte, this film became a hit in India, and is ranked in IMDB’s Top 250. Although director Aamir also stars in the movie, he does not appear until the second half. He leaves the stage to Darsheel Safary, playing nine-year-old Ishaan.

Ishaan is the second child in a middle class Awasthi family. His older brother is an exemplary student and athlete who makes his parents very proud. Meanwhile, most of Ishaan’s time is spent in his own world where fish and dogs are his friends, and there are birds, dragons and intergalactic fights. However, harsh reality often knocks its way into his vast world of imagination, and we get to know that the boy struggles a lot at school. He cannot read or write, and is about to fail third grade for a second time. He responds tho the stress with disobedience that gets him into even more trouble. Eventually losing patience, the father sends his son to a boarding school to be “beaten into shape”. Ishaan is overwhelmed with frustration in his new environment. Not only he is a new kid coming in mid-term, but he also loses the support of his mother and brother. He is ridiculed by strict teachers and even loses his biggest passion, painting.  We watch how everything goes downhill for Ishaan as a soundtrack song sings, “Idiot, duffer, crazy, lazy. Why can’t you?” When Aamir Khan’s character, arts teacher Ram Nikumbh, enters the scene, everything changes. He comes in with music and play; he doesn’t act as any other teacher in the school. He notices Ishaan and sets out to find what is troubling the boy. He discovers what Ishaan’s parents and teachers have missed – all the boy’s mistakes and shortcomings have a pattern. Nikumbh concludes that Ishaan is dyslexic, and admits he has the same problem. He starts helping the boy to overcome his disability, meanwhile unleashing his amazing artistic potential.

The movie is divided into two parts – first we see things from Ishaan’s perspective, and then through the teacher, Nikumbh. This is achieved by clever camera tactics and good use of soundtrack songs, and creates a strong bond between viewer and Ishaan. His role has very little dialogue, but the great performance of this young actor, plus his beautifully animated inner world, creates a vivid character. When we see Ishaan bonding with Nikumbh and building his confidence back in the second part of the film, it is such a strong emotional trigger.

The movie shines a light on the problem of dyslexia and portrays it relatively accurately. (Source: Wikipedia) Activists who want to bring awareness to this problem in India and worldwide celebrated this theme. But the movie is not just about the particular issue of dyslexia, but more of a general statement on education.

“Out here it’s a merciless, competitive world where everyone wants to breed toppers and rankers. Each child has unique skills, capabilities and dreams. But no, everyone’s hell bent on pulling and stretching to make each finger long. Go ahead, even if the finger breaks,” says Aamir’s character Nikumbh.

The movie shows that a child is not just an empty jar that parents can put their hopes and ambitions into, forming him or her into a “perfect citizen.” And ironically, the robotic, monotone daily life of family members, beautifully shown in song sequence (Watch on YouTube), is not joyous at all. Parents and teachers are forcing children to follow in their steps for their “bright future,” leading them to the same “rat race” that they are in themselves. “Taare Zameen Par” and “3 Idiots”, both movies with Aamir Khan, go very well together, as one spotlights problems in the high school system, and the other in higher education.

This film received its share of criticism as well. And while it does have its weaknesses, especially being a bit over the top with preachiness in some parts, they are minor flaws in the overall picture. The movie is beautiful and well made cinematically. More importantly, it addresses a problem that seems to be very important to the people who made this film. As for Aamir Khan, he uses his fame and strong influence as a Bollywood superstar to bring awareness to serious issues and tries to change the world for the better. Screening of the movie has prompted open discussion about dyslexia among parents and educational institutions that has resulted in positive policy changes. (Source: Wikipedia) This kind of reaction is a big feat for any film and it deserves admiration and respect.