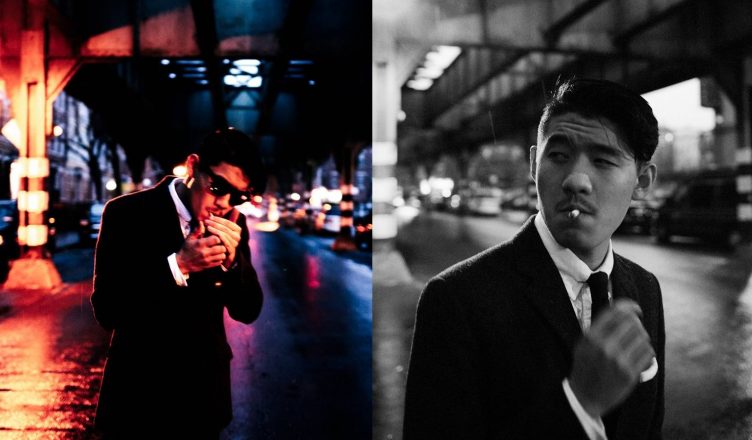 Starbucks has this particular cozy feeling you can’t mistake with anything else, especially during Christmas time. This is where my meeting with actor, filmmaker, producer Raymond Chu started – surrounded by steamy clouds of coffee scent and Christmas tunes. I asked him to tell his origins story, how he got started on his current path and, apparently, it all began with a mistake…

Raymond: One time when I was back in Taiwan we bought a VHS with Jurassic Park. Accidentally we took the “making of”, not the movie itself. Back then it was the mere beginning of CGI and what I saw really had an impact and stuck with me. Living in Long Island and going to a Catholic school, however, I had fewer choices, so I started with theatre. Acting seemed to be the easiest way to get into the film industry. I think it was a good choice overall, giving me a different perspective. Also, most of the great guys from Golden Era of Hollywood, like Charlie Chaplin, Buster Keaton, all came from Vaudeville!

Me: So was it  straight journey from there?

Raymond: Actually in teens I was at a crossroads. Aside from acting I was very much into robotics! I was the youngest kid on robotics forums back then. Remember AIBO, the Sony robo-dog? One summer I washed every car in my neighborhood, saved up from birthday, Christmas and bought myself one from eBay. Eventually it was a big question to go into acting or robotics. Looking back maybe robotics would have been a better choice. (laughing)

Me: Were your parents supportive of your acting career choice?

Raymond: I was curious kid and my parents were supportive of all my interests – from when I started learning Japanese because of Pokemon, to robotics, to film. There were cameras in my home, the old VHS style. We kids would do little movies with in-camera tricks – we even made the opening of Raiders of the Lost Ark with little Pikachu doll. That is how many of the filmmakers started – huge curiosity for this technology. After high school I got into NYU (New York University) Theater and focused on acting. However, the downside with the theatre and film scene in the USA, is that they did not have roles that I was interested in. Most roles for Asian-Americans are very stereotypical or just non-existent.

Me: When did you get into film directing?

Raymond: I did some editing during my school years. Would stay after classes, edit, go back home very late, do my homework and repeat the same routine the next day. I started taking filming seriously only in my twenties.

Me: Tell more about your short film American Odyssey (readers can see this psychedelic experimental film Tribute to Cinema and Inspiration of George Lucas and Star Wars on Vimeo)

Raymond: It is a short film about George Lucas, Steven Spielberg and Francis Ford Coppola when they were just starting out. Now they have this epic aura around them, but they too began as “starving artists”. The film also touches untold story of George Lucas wife, who was a famous movie editor working with directors like Scorsese. She supported her husband and helped with her skills and connections. In the film there is a notion of her as his inspiration.

Me: What difficulties did you face during this project?

Raymond: It was the longest running project I had, spanning over three years. At first I did not really trust in my abilities, I did not know whom to listen to more when making decisions. And in special effects film, when you make a decision it’s difficult to change it afterwards. Hurricane Sandy was a pretty tough time to move the project as well.

Me: So what would be advice that you would give yourself if you could go back before making the film?

Raymond: (after a long pause) Don’t do it? (laughing) I am grateful that I did it but it was a tough project.

Me: And still you are back in directors seat with your new project Bloody Angle – what is it about?

Raymond: It’s the untold story of Chinese Americans at the beginning of last century. After the Chinese Exclusion Act of 1882 that prohibited Chinese immigrants to come into the country the situation was pretty dire (See more about this US law on Wikipedia). The Chinese were pushed from the Midwest and West Coast to the East Coast cities like New York and Boston. There they had to compete for jobs and survival itself with the Irish, the Italians and all other immigrants. Also, imagine there were like 100 Chinese men for each Chinese woman back then, unimaginable disproportion like in some sci-fi dystopian film. So there was tension. In “Gangs of New York” the Chinese are shown for maybe five minutes. However, researching into the history I found out that they were actually THE Gangs, the most feared ones.

Me: Would bringing back this bloody history shine a bad light on American-Chinese?

Raymond: The story I am working on is more like “The Godfather”. It’s about the hard choices these people had to make to survive, and is essentially a story about New York capitalism. Main character is Sai Wing Mock (or Mock Duck), a leader of one of the biggest gangs in Chinatown. Reading a dozen books about New York of those times I stitched his story together and I think it is worth telling. He started a gang war that lasted for 16 years! But I want to show the human part of this as well. Though not sure who can finance a film that is basically about bad American immigration policies. (laughing)

With the Christmas music in the coffee shop and Raymond dressed in stylish vintage suit, I felt like transferred to the roaring twenties New York, with all the daily realities: the jazz, the Art Deco and people’s heads being chopped off in the Chinatown.