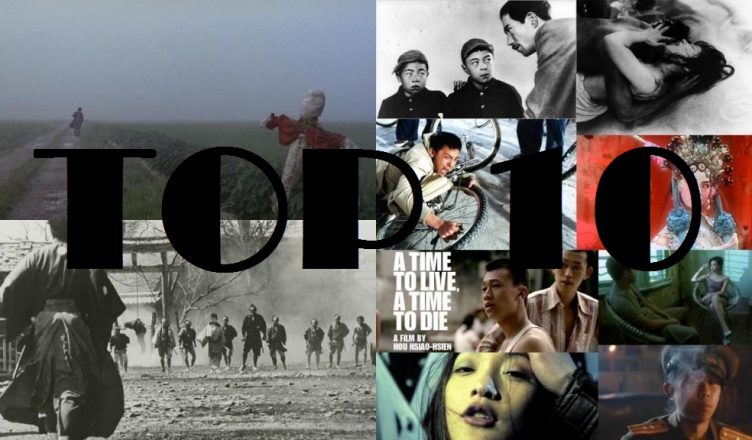 Picking 10 favorite films is never an easy task, even when the list is restricted to a particular national cinema, time period, group of directors or genre. As such, I would like to introduce this list by stating that, when asked to discuss my 10 favorite Asian films for The Asian Cinema Blog, I did not think too long or hard about the task at hand; rather, I chose films that immediately came to mind for whatever reason so, if asked to repeat this exercise in a year’s time, I might submit a very different list. Some of these selections are films that have been on my mind of late because of research projects with others being enduring viewing staples that played a significant role in furthering my passion for Asian cinema. Looking at my choices, which are listed chronologically, a few obvious themes or threads emerge, such as the power of memory, urban development, and social-political critique through genre, while more than a couple of these films are ostensibly coming-of-age narratives. At this juncture, however, I will resist the temptation to indulge in self-analysis through cinematic taste and present you with my 10 favorite Asian films.

Splendid early Yasujiro Ozu comedy with the suburbanization of Tokyo seen from the point of view of a pair of rambunctious schoolboys who struggle to accept their office worker father’s lowly professional status while avoiding the attention of the neighborhood bullies. An impeccably timed crowd-pleaser that never makes light of the personal compromises and humiliations that can result from social hierarchies, I Was Born, But… is a classic of the silent era.

Japan, 1860: a formidably skilled ronin (Toshiro Mifune) wanders into a town that is being torn apart by rival lords and devises a plan to free its honest people by offering his bodyguard services to both sides. Based on Dashiell Hammet’s crime novel Red Harvest (1929), this classic chanbara boasts rousingly staged swordplay, a sly sense of humor that works in tandem with Masaru Sato’s dynamic score, and a truly great movie star in his most iconic role.

Woman in the Dunes (Hiroshi Teshigahara, 1964)

Woman in the Dunes is a surreal allegory of modern life in which an amateur entomologist (Eiji Okada) is trapped in a secluded village and, over time, adjusts to his simple existence as individual priorities are redefined by the limitations of the environment. Hiroshi Teshigahara was a master of abstraction, and this is the third of his mesmerizing collaborations with author Kobo Abe and composer Toru Takemitsu following Piftfall (1962) and The Face of Another (1966).

National identity, personal memory, generational difference, and the loss of cultural heritage are intertwined by Hou Hsiao-hsien as a mainland China family relocates to the south of Taiwan in 1947. The young Ah-ha (Ah-hsiao) enjoys his childhood, unaware of the process of readjustment that his parents and grandmother are going through until later in life. Exquisitely framed with an emphasis on everyday repetition, Hou’s measured rhythm gradually belies a profoundly moving expression of dislocation and loss.

Chinese history, a multitude of genres (melodrama, political satire, slapstick comedy, romance), and the subversion of gender roles combine, but crucially never clash, in Peking Opera Blues, a rollicking piece of pure entertainment from Tsui Hark’s. A revolutionary group tries to upset the corrupt establishment circa 1913 by stealing important documents with their efforts resulting in a quintessential Hong Kong movie that somehow offers a myriad of messages while never taking itself too seriously.

An intoxicating tale of romantic rejection, this 1960s-set masterpiece chronicles the affairs of a narcissistic playboy (Leslie Cheung) and the impact of his attitude on his lovers (Maggie Cheung and Carina Lau) and a kindly policeman (Andy Lau). Wong Kar-wai’s signature elements are established here (fans, keys, room numbers, rainy nights, swooning period music) with the sense of entanglement in a conservative era heightened by cinematographer Christopher Doyle’s sweltering compositions of cramped rooms and empty after-hours streets.

A long summer in Beijing in the early 1970s: with their parents away for re-education during the Cultural Revolution, teenagers are free to roam the streets in pursuit of experience and romance. Adapted from Wang Shuo’s 1991 novel but also informed by director Jiang Wen’s youthful experiences during the Mao era, In the Heat of the Sun is a richly evocative piece of cinematic memory that filters a tumultuous period of China’s modern history through hazy nostalgia.

“My camera does not lie,” states an unseen videographer (Hua Zhongkai) at the start of Suzhou River, prompting an unreliable narrative involving his bar performer girlfriend (Zhou Xun), a small-time criminal (Jia Hongshen), and the daughter of a wealthy businessman (also Zhou). Lou Ye’s sensuous neo-noir is formally adventurous and genuinely heartbreaking in its rumination on the fleeting nature of romance in the globalized metropolis, with Xun especially compelling in a challenging dual role.

Sixth Generation urban realism via Italian neorealism as the destinies of two teenagers from markedly different backgrounds – one a poor migrant, the other a middle-class native – are united by a mutual need for a particular mode of transportation. Aside from its pointed commentary on growing economic divisions, Beijing Bicycle also features exhilarating footage of China’s bustling capital, with courier Guei (Cui Lin) navigating busy roads and narrow backstreets in order to complete his deliveries.

It’s a tough call between this haunting true crime story and Bong Joon-ho’s fantastic, similarly multi-faceted monster movie The Host (2006). Memories of Murder is a meticulously crafted account of the efforts to apprehend a serial killer who was active from 1986-1991 with Bong drawing parallels between the handling of the police investigation and the wider power structures of the time. He also caps off his unflinching vision with one of the most chilling codas in modern cinema.