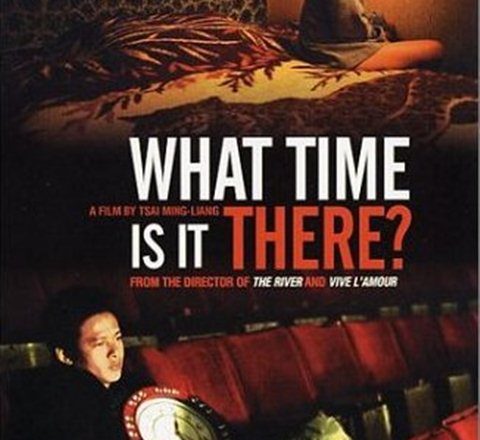 What Time is it There (你那邊幾點)

What Time Is it There? on Amazon.

“Poet of Loneliness” is how Jonathan Rosenbaum introduces Tsai Ming-liang and the director truly lives up to his name.

The poet laureate of loneliness, Tsai has more ways of describing how people can feel alone when they’re together than any other filmmaker who comes to mind.” (Source: Johnatan Rosenbaum)

Out of all of his films I have seen so far, “What time is it There” seems to convey the most loneliness, alienation and detachment. It is the first film of the trilogy: “The Skywalk is Gone” and “Wayward Cloud” go after it. Even the finale of the trilogy, “The Wayward Cloud”, where our characters eventually do make a human connection, does not bring any hope or resolution that one could expect. But let me not get too far ahead of things.

Hsiao-kang (Lee Kang-Sheng) is a street vendor selling cheap watches on a highway overpass. A tragedy just hit his family – his father passed away. His reaction to the event though is automatically performing Buddhist rituals instructed by a monk. Also, he starts peeing in plastic containers in his room, afraid to go out of his room and bump into his father’s ghost. His mother (Lu Yi-Ching) has a harder time adjusting. She becomes obsessed with religious rituals trying to please and comfort the father’s ghost. She starts thinking that a big fish in their fish tank “Fatty” is a new habitat of her late husband’s soul.

The last main character is a young woman Shiang-chiyi (Chen Shiang-chiyi) who is about to embark for Paris, a dream location for so many. She insists on buying a double time-zone watch that she liked from Hsiao-kang, even though it belongs to him. He eventually gives into her demands and she awards him a cake in addition to paying for the watch. This small sweet gesture touches Hsiao Kang deeply and he starts re-setting watches to Paris time longing for this female stranger. He does it for all the watches he is selling, and any watch he encounters, even a big one on the side of a highrise building. While this could be easily used as a romantic story element, Tsai Ming-liang is not known for being predictable and going the expected “easy” way in his films. In this case this longing to synchronize with the woman in Paris is desperate and awkward, leading the character to more absurd situations rather than a rewarding romance.

Shiang-chiyi is not enjoying the “capital of love” either. Paris only reflects her inner feelings of loneliness and alienation. She unknowingly experiences some synchronized events with Hsiao-kang a few times. One of them is a special appearance of Jean-Pierre Léaud, a lead actor in François Truffaut’s “The 400 Blows”. At the same time Hsiao Kang is watching this movie back in his Taipei apartment. But then she gets sick from drinking too much coffee (most people in Taiwan are more tea drinkers), what else would you drink in Paris but coffee?

The reviewers of Tsai Ming-Lian’s “What Time Is It There?” have compared it to the work of Yasujiro Ozu, Robert Bresson, Michelangelo Antonioni, Jacques Tati and Buster Keaton. If none of these names stir admiration and longing in your soul, start with them, not with Tsai.” (Source: Roger Ebert)

As many reviewers comment, you either like this auteur or you don’t. I find his movies to be a mesmerizing and hypnotic experience. Often I cannot pin point if the scene was funny, or was it sad. As Roger Ebert continues:

Symbols of time, life and death put this movie in a realm of existentialism. However, it does not really try to answer any questions or come to any conclusion. It just lets its characters sift through very mundane existential despair. A short film “The Skywalk is Gone” links together the two features “What Time is it There” and “The Wayward Cloud”. There the overpass where Hsiao-kang was selling watches is demolished. Shiang-chiyi is back from Paris and trying to find him. They pass each other on the stairs to metro station. Hsiao-kang recognizes her, but she is so focused on searching for him that she doesn’t see him. In this absurd situation the director practically pokes and makes fun of the human search for meaning. Then he just leaves us lingering there, on this particular uncomfortable feeling. This makes Tsai Ming-liang “poet of loneliness” par excellence.