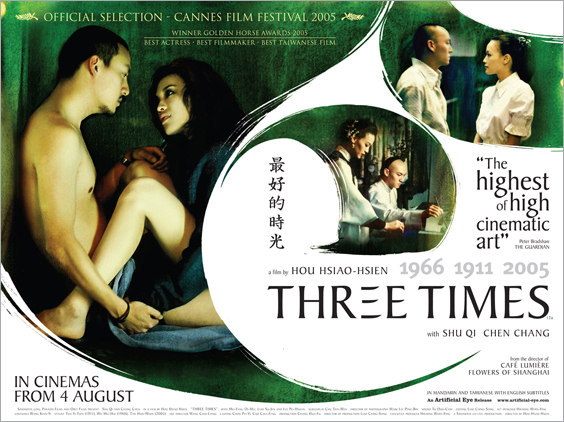 “A man meets a woman…” – countless stories written in fiction, filmed on celluloid and lived in life can have the same beginning. Love has been an endless inspiration for humans throughout our existence. There is something unique and universal about each of the stories. With utmost subtlety Taiwanese director Hou Hsiao-hsien crafts three of those tales. All include the same actors, but very different times and sentiment. With a focus on the human condition rather than events, he manages to show the highs and lows that feelings of love can bring.

“Time for Love” takes us to 1966 Kaoshiong, Taiwan. Those were times of a slower pace, where one could enjoy the simple pleasure of a pool game for hours. A song “Smoke gets in your eyes” and “Rain and tears” play in the background, a resonance of a faraway rock-n-roll, hippy inspired freedom culture. It provides only a ripple in this world-away island compared to the chaotic tsunami of events in the USA. It is a time when writing letters was the norm, and finding people was not as easy as “just Google it”, a time where love can be born quickly, but could take time to blossom and flower. Chen (Chen Chang) meets a beautiful new pool hall hostess May (Qi Shu). He is leaving to military service the next day, but promises to write letters to her. This most nostalgic story of three people is also a very personal one for director.

The character of Chen is a Hou substitute, as the director fell in love with a pool hall girl before setting off to undertake military service, only for her to eventually marry another man.  With ‘A Time for Love’, Hou assembles an idealized memory, allowing the central couple only one evening together, but closing the story as they hold hands whilst waiting for Chen’s bus, rather than detailing their loss of contact (Source: vCinemaShow)

“A Time for Freedom” is the most ironic title for this story that brings us to 1911, a world frozen in ritual, hierarchy and propriety. Here is no place for human emotion and expression. Mr. Chang is an intellectual, a fighter against Japanese colonialism and for the freedom of Taiwan (Taiwan had been colonized by Japan from 1895 to 1945). He is also a modern thinker, writing against tradition of concubines and other old Chinese cultural relics. Mr. Chang is an artistic soul, highly moved by poetry, music and aesthetics. However, this does not prevent him from visiting courtesan Ah Mei in a brothel. Even though we get to know he has a wife and children. He speaks to Ah Mei of his high values and even helps other courtesan of the brothel to get a brighter future by becoming a concubine. To contradict himself even more, he never treats Ah Mei as more than a service-provider, a pretty object, while she is clearly in love with the man. The isolation and sadness of Ah Mei reminds me of Zhang Yimou’s masterpiece “Raise the Red Lantern” and the desperate female dwellers in the rich lord’s estate. Director plays with the filming style in this one – it is made in a silent film style, where we cannot hear the dialogue, but it still has color and we do hear the singing of Ah Mei.

“A Time for Youth” is set in the 2005 urban jungle of Taipei. We saw ripples of Western culture in 1966, but now it’s flooded with modernity, freedom and liberalism. While it seems like an improvement after a caged courtesan life a hundred years ago, Hou Hsiao-hsien doesn’t think so. In this piece he turns a critical eye of today’s aimless youth with a syndrome of “too much freedom”. Jing is a rock singer, singing in English in the trendy clubs of Taipei. She lives with a lesbian lover, but at the same time develops a very carnal relationship with a male lover and photographer, Zhen. Though both lovers worship her, Jing is always detached, living in her world without any consideration of other’s feelings. This leads to the suicide of the lesbian lover. There is not much dramatization or compassion in this, though, director shows the suicide as a childish and self-absorbed act. Jing is a metaphor of an idolization culture. Even her physical flaws are idolized as we see from the scene where Zhen treats her epilepsy card as an artistic artifact. The selfie photographs, blogs with titles like “No past, no future, just hungry present” and “ME and I” culture of hedonistic instant gratification – that is how the new Taiwanese generation is seen through Hou’s lens.

I feel that every era has its own distinctive sense.  These eras will never come again.  Time keeps moving forward.  One’s environment and one’s thoughts keep changing as well.  They’ll never come again.  It’s not that they’re good times, it’s because we’re recalling them that we call them good times. (Source: vCinemasShow)

There are stylistic synchronicities that connect the three stories, but I loved the subtle differences. Hou Hsiao-hsien portrays those differences with brilliant cinematographic poetry. The physical distances between two lovers, the more static or more dynamic camera movement, different technologies of lighting and communication and the pace they set – all contribute to the final composition of the film. Concubine Ah-Mei receives a rare letter from Mr. Chang, she opens it slowly with scissors, savoring the moments. The letter itself is written in beautiful calligraphy that clearly took some time to finish. May finds a letter in a letter box and opens it tearing paper apart right there and right now. The letter is short and concise, written simply with a pen. In modern Taipei, Jing communicates in text messages and blogging. Communication is digital, multi-screen, overwhelming and very demanding. The lines between private and public are blurred, or even gone entirely, as personal details are shared online. Even a suicide letter is left there on the screen, lifeless just as the one who left it.

Roger Ebert shared an IMDB factoid with us in his review of the film:

Of the 10 films that Hou Hsiao-hsien directed between 1980 and 1989, seven received best film or best director awards from prestigious international film festivals. In a 1988 worldwide critics’ poll, Hou was championed as one of the three directors most crucial to the future of cinema. (Source: Roger Ebert).

“Three Times” is a cinematic poetry at its heights, a masterpiece by a brilliant mind worthy to experience for any serious film lover.