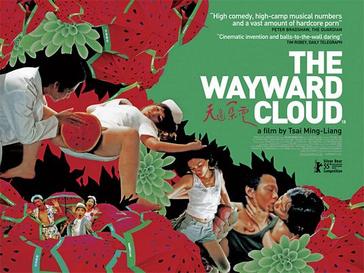 The Wayward Cloud on Amazon.

“The Wayward Cloud” is a very daring movie by Malaysian-born Taiwan-based auteur Ming Liang-Tsai. It is a parody of pornography, an ode to sexual awkwardness and a woman’s quest to take control of her sexuality – all in one. This film encompasses a lot while saying so little. Through the director’s signature static camera, long shots, scarce dialogue and heavy use of symbolism, unravels a very a graphic story of human alienation, loneliness and body objectification.

In this film director puts the city of Taipei into yet another extreme – a drought (opposite of constant rain in his previously reviewed “The Hole”). Water is scarce and the government encourages people to eat watermelons as a source of hydration. Like in “The Hole” we see glimpses of the city and government only through a TV screen. After viewing the opening scene of the film, where watermelon is used for… very unusual purposes, watching all people – the old and kids – indulging in a watermelon frenzy is funny and uncomfortable at the same time. This feeling stays throughout this provoking film.

She finds a watermelon floating in the river and brings it back home. Not by coincidence at this point her paths with Hsiao-Keng cross again. They build their relationship through cooking a meal together. While they do come very close, the barrier between the characters is always there. The camera angles, the situation of bodies, are always showing a separation and a fear of truly connecting. This builds up tension in the audience, waiting for the moment of inevitable connection, conclusion to this farce-like alienation. Moreover, as an audience we know much more about Hsiao-Kang, which cumulates curiosity about what kind of conclusion will the director eventually give us. The ending is quite expected, considering the suggested mood of the whole film, but nonetheless shocking. It leaves the spectator with a distaste and discomfort. One might even consider it offensive, but it does have its attempted effect. I will not reveal it here, thus to fully comprehend this review you should see the film first.

For me, among all the other things that this movie talks about, it was a tale of woman’s quest to take control of her own sexuality. Tsai alludes to it symbolically, through imagery of flowers, and directly, woman going to an adult film DVD shop and displaying more aggressive attention towards the male. The imagery of flowers blooming in the drought, anxiously waiting for someone to water them and the imagery of watermelon, and the male semen are complementary and placed not by accident. “The Wayward Cloud” has a lot of deep sexual imagery that, just like the hole in “The Hole”, can have interesting Freudian interpretations.

The conclusion of the film, though, makes it a failed quest and a grim story. Both female characters of the film eventually are just the objects of more active male sexual desire. One of the final scenes with Shiang-chi’s tear rolling down her cheek transforms this movie from absurd comedy into a tragedy. However, Tsai Ming-Liang does not punish his female characters for taking control of their sexuality in the same way Hitchcock does (when female pursuit of romantic interest awakens dark forces of nature in “The Birds”). Here the male character Hsiao-kang, is just not able to connect in any other way, he does not know how to. We can see it in an earlier scene in the adult movie DVD shop he responds to Shiang-Chi’s craving for physical closeness by pushing her on her knees. When she eventually starts unzipping his pants, he stops her and hugs her head, stopping the close-to-happen sex scene. Therefore, “The Wayward Cloud” is not a movie about male dominance and female body objectification, as much as inability to make genuine connection from both sides.

“The Wayward Cloud” is full of raw sex scenes, bordering the film with pornography. However, sex is never connected with pleasure, romance or intimacy. It is accompanied by awkwardness, absurd and pure animalistic nature of it. Tsai Ming-Liang explains his point of view in an interview:

If you look at real life, sex is difficult. All human relationships are difficult. Sex is even more so, due to its private nature. It’s raw and naked. Often times, the timing is wrong. Or else, the position is wrong. Unless it’s the kind of passionate love experienced in the beginning of a relationship, or else it’s just not the same afterwards. (Source: Asia Society)

The online magazine Rogue has a very detailed, scene by scene analysis of the sexuality and its meaning in the film. I highly recommend reading it after watching the movie, you can find it here: Rouge “The Wayward Cloud” review.

Director, answering a lot of questions about his films, laughingly reminds that he does not make Hollywood movies. So if you are preparing to dive into his films, I can say this a new version of words  from another famous film – “Buckle your seatbelt Dorothy, because Kansas is going bye-bye”. Welcome to the world of Tsai Ming-Liang.

Have you seen this movie? Let me know what you think in comments.