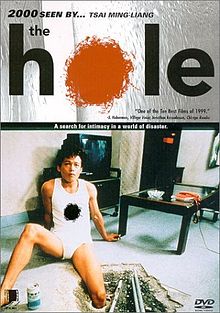 The first time I heard about the movie “The Hole” was in my teen years while reading a book about the history of cinema. The film was praised as an example of cinematic expression at its artistic heights. The introduction and the plot synopsis made me very curious to watch the film. Years later, finally having a chance to see it, I recalled that this was THE movie. My curiosity was finally satisfied and I was certainly not disappointed.

The story of the film is bizarre and mysterious, although it is not the film’s most important part. It is the turn-of-the-millennium (actually this movie was commissioned by the “2000 Seen By…” project) and weird things are happening in Taiwan. A disease called “Taiwan Fever” is spreading through the highly populated city and causing people to exhibit cockroach-like behavior. They are afraid of light and crawl on all fours into dark spaces, staying there for hours. In the meantime, the city is shutting down. Water will be turned off soon, but some stubborn people staying in their apartments risk living on rainwater. There is no more trash pickup service, so the people who stay just throw their trash into the streets. This makes the epidemic worse, as cockroaches supposedly spread it. Our main characters are The Woman Downstairs (Kuei-mei Yang) and The Man Upstairs (Kang-sheng Lee). There is a leak at the woman’s apartment, and a plumber goes upstairs to the man’s apartment to see what the problem is. Incompetent, he leaves a hole in the man’s floor which is also the woman’s ceiling.

However, it does not become a romantic story, nor a traditional apocalyptic fantasy. Being an unconventional artist, Tsai Ming-liang takes this premise and builds something unexpected – a cinematic exploration of human loneliness and urban alienation. Scarce dialogue allows many other things to stand out in the movie – the sounds of rain, the contrasts of color and shadow, the expressions of the actors. They are so believable, as if they are more “living it” than “acting it”. The whole experience of a non-narrative film is very different and requires spectators to “turn on” different kind of senses to appreciate it.

As explained by Fred Patton in his review, “Peering into the Hole…” (Source: DVD Beaver). The hole itself becomes an interesting character, and its role changes throughout the film. First it is antagonistic, a tear in the shield of privacy that prompts our characters to fight and then try to close it again. Then it is a source of curiosity. Peering into neighbors’ lives in an urban environment has always been a source of guilty pleasure. This antagonistic and curious play between the man and woman leads to many funny encounters. Though it never becomes too much of a comedy, as the director explains, “Some situations just appear funny. When things get real or realistic, they appear absurd. Life is just like that. That absurdity can appear humorous.” (Source: Asia Society) Later the hole becomes a very sexual object from the man’s perspective. In some scenes where he cleans the hole, he looks at it while smoking a cigarette and pours the ash down into it. On another occasion, he tries to make it bigger and gets his leg shoved through the hole, injuring himself in a manner deserving of Freudian interpretation. Ultimately, the hole becomes a source of hope and humanity. The last scene, where the man lifts the woman from the darkness into the light, is beautiful, almost divine. The ending brings some hope into this otherwise dark, wet and nihilistic film.

“The Hole” is a mesmerizing experience. The constant sound of rain outside (which by the way is very realistic experience here in Taipei, where it can rain for a week), glimpses of Kafkesque metamorphosis happening to people, and even the TV broadcasts about how to make the best instant noodles all contribute to the feeling of the approaching collapse of civilization. The colorful music and dance scores (a personal tribute from the director to the singer Grace Chang) are shot in the same spaces of the building, and add to the movie’s dream-like (or nightmare-like) experience. “The Hole” is a slow movie, far from the mainstream, but if the viewer can accept the movie’s terms of engagement it becomes a very unique and pleasurable experience.