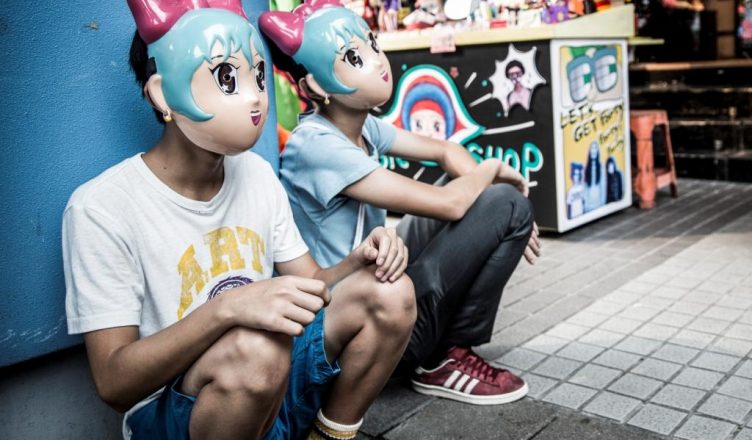 What is mostly striking about Salute! is Chih-yen Yee’s ability to tell a story of young kids while deceivingly inject it with a few doses of adult themes in between. This is a representation of youth that is rarely shown in film, and most of the time difficult, especially when your main choice of audience is young teens. Salute! reminded me of the strange neo-noir environment of Brick (2005, Johnson), although the later is a much darker film. Salute!  may not be as rough, but what is odd is that there are a few subtle moments that are out of place which at one point felt that the film might slide into much more mature tone, but quickly retains its quirkiness and child-like personality.

As predictable as the plot was, the film is highly entertaining. The whole story revolves around a young boy named Lefty, as he gathers a few of his classmates to plot a heist in order to secure money for their over-due school fees. Lefty decides to steal an old forgotten statue (incidentally, the statue of the founder of The Republic of China Sun Yat-Sen)  from the school to sell it and split the money between all four of them. As They plot for their heist after school, Lefty finds a notebook in the street near the school which had notes and sketches of the exact same plan. Lefty decides to use the notebook as a pawn, and soon they find the owner.

The following events present us the odd relationship between Lefty and the boy Sky (the owner of the notebook), as they compare how poor they are in order to see who deserves to have the statue. It is at this point of the story that the film suddenly switches tones (along with a few more serious moments near the end). At one point Sky takes Lefty to his house to show him how poor he is, and as they stare at Sky’s small room from the street Sky’s father turns out to be behind them the whole time and he ends up attacking Sky before the boys both run off. It is at these few critical moments that the film reveals its true motifs, the struggle of the lower class in Taipei, and especially its effect on the youth.

The film’s visual style is particularly interesting, the noir-ish lighting techniques and its unusual combination with a classical score are very well executed. The adults in the film are rarely shown, as the film shows Taipei from the perspective of young schoolboys which, of course, adds to the absurdity that the filmmaker was aiming for.

This film has particular political undertones that Taiwanese people would recognize. Nonetheless, Yee’s nationally specific political satire can be relatable despite how much we know about political nuances of this particular country. Salute! seems to be tackling the changing symbols of sacred cultural icons. We can see this happening all around us – the most revered places, the axis mundi where divine meets the mundane change through time.

Just to take an example of Egyptian pyramids, that in ancient people’s mind was such different space, that we could not even comprehend. Or European churches that increasingly serve more as tourist attractions rather than highly divine places of worship. Same things happen to people of high cultural and historical significance. Their replicated images first serve as inspiration, then as reminders of historical heritage, but as time passes, these images can become an awkward burden, just like what happened to the Sun Yat-Sen statue at the school.

The boys did not see the symbolics of the statue, but the bare truth – just the raw material that is being wasted gathering dust at school basement. Probably, school administration has similar thoughts, but by no means they are allowed to say it. We can relate this to the classic tale of The Emperor’s  New Clothes, where just unspoiled new generation is able to speak the truth. Just as these boys coming to age and trying to find themselves, so is the whole nation of Taiwan trying to redefine itself  in the new century. Question lies still – how many of these “old statues” from the past century they need to hold on to?

Personally, I find it interesting that Yee ended the film in a very unpredictable way. [Spoiler] One might assume that a film like this would aim to teach kids that, to put it simply, ‘stealing is bad’, what eventually happens is quite the opposite. In fact, even though the boys fail, Lefty and Sky eventually decide to plan another heist in the future. Regardless of its political intentions, Salute! is a very engaging film, a school dramedy that is well executed and I am curious to see what Yee is working on next.