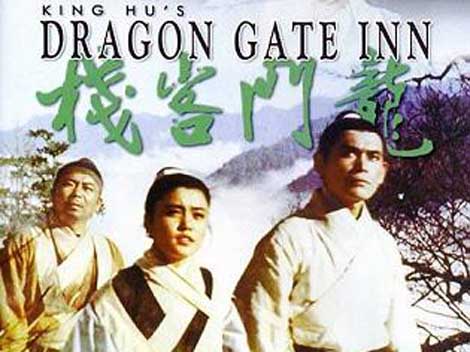 This is a special movie entrée. First of all, “Dragon Gate Inn” was screened in the theater in the movie from last review – “Good Bye, Dragon Inn”. So it makes it kind of cinema inception experience (cineception if you will). Secondly, it is not a movie I would generally recommend to see, it would target very specific audience form the West – ones that like classic Chinese martial arts or wuxia (武俠) movies. Therefore being a famous classic, it is a movie well worth noting.

The story is quite complicated and a lot pre-story is simply explained in the beginning. It is China during Ming dynasty (XVth century) when there were many eunuchs in Emperor’s court. They were often considered more reliable than officials and less likely to try to seize power, as they could not have children and thus start a dynasty. Consequently eunuchs gained a lot of power and in the movie they are shown as cruel, good at martial arts and vicious. They accuse the Minster of Defense of treason, execute him and exile his children to the outpost of “Dragon Gate Inn” near Mongolia. However, the children are still considered a threat and they send agents to kill them at the Inn.

Cut off the grass and rip out the roots, never let it grow again!

While the agents are skilled in martial arts, doing the task they meet even more skilled wandering heroes (youxia) who want to makes things right just out of their sense of justice. Those are great swordsman Hsiao Shao-tzu, innkeeper Wu Ning, brother and sister Chu (sister is dressed like a man, and fools almost all of the characters, however, she does not look like a man to viewer, so that is another confusing point in the story). There are a few plot twists and more characters involved and though the story is straight forward “baddies vs. goodies”, it becomes difficult to follow. The characters are not much developed and it is difficult to understand who they are and why are they doing things without some preparation. There is a hint of romance, but just a subtle hint. Lastly, why “Dragon Gate Inn” is not at the top of recommendations list – for modern day viewer the fight scenes and techniques might seem a bit goofy compared to today’s movies.

So why is it worth your time? Well, first of all with this and few other movies, the director King Hu started a new generation of wuxia cinema. Considering when this movie was made (1967) the fight scenes, camera techniques, the special effects were revolutionary, especially for Chinese film. The modern day famous wuxia masterpieces – “Crouching Tiger, Hidden Dragon”, “Hero”, “House of Flying Daggers” – all pay tribute to it.

My favorite reason for liking this film is the continuation the ancient traditional Chinese literature genre of wuxia. These stories are about wandering heroes, usually from lower social classes, who are very skilled in martial arts and have a strong sense of justice, they follow code of xia (common attributes: altruisms, justice, individualism, loyalty, courage, truthfulness, disregard for wealth, and desire for glory (Source: Wikipedia). They often fight against corrupt government officials, defend the common people, bring villains to justice risking their own lives and do not expect a reward. They are similar to lonely cowboys from American Westerns, Robin Hood type of robbers, or wandering good-will ronins (samurais without master in Japan).

The wuxia genre has an interesting place in Chinese history and society. It was banned by government in some dynasties as they have these anti-government, rebellious notions. It was always very popular among common people – no surprise there. In a society constrained by Confucian rituals these individualistic, carefree, brave and just warriors, must have been a beautiful, tempting fantasy. The genre peaked in popularity during XXth century because of its anti-Confucian tendencies.  It was popular with the May Fourth Movement, who wanted to modernize China taking many ideas from the West. Also, the anti-feudal government, pro-common people themes were and still are congruent with Communist Party values. Wuxia popularized Chinese martial arts and culture around the world. Even Western movie makers contribute to it – like “The Forbidden Kingdom” or “Kung Fu Panda” (which I personally don’t like). It is very interesting to see how traditional ancient genre transforms itself to other forms of medium – film, comic books, and video games – and how so many of Chinese culture elements become incorporated to everyday lives of people around the world.

Having all this background in mind, “Dragon Gate Inn” may come as a different experience. Plus if you watch “Dragon Gate Inn” and “Good Bye, Dragon Inn” one after another – it adds another interesting dimension to it.