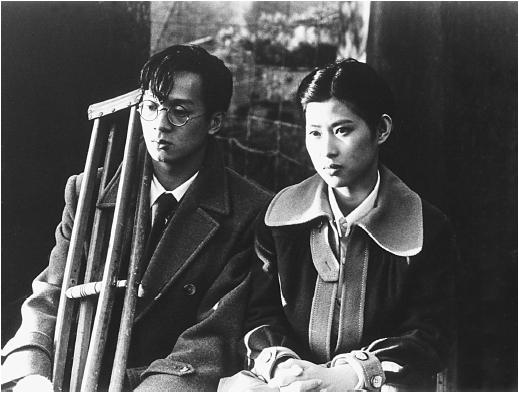 There is one way to learn about the past through history books. Piles of facts and retrospective speculations on the causes of different events cover a much more turbulent and dramatic human side of the history. A famous chilling quote by Joseph Stalin captures the sentiment:

A very different feeling emerges when we connect to history through a narrative. Thus, among other things, it a duty of artists to create stories of collective experience to immortalize those fleeting and often willingly forgotten events. Hou Hsiao-hsien is one of those great storytellers for Taiwan. He pioneered retelling stories of some very horrific and painful events that were a taboo topic during martial law years in the country. However, instead of portraying horror, pointing fingers and assigning blame, he takes a very different approach in the coherent with meditative style of his filmmaking. His poetic approach existed in the other two parts of the trilogy: The Puppetmaster and Good Men, Good Women.  City of Sadness was highly acknowledged by the film critics around the world, becoming the first Taiwanese movie to be awarded a Golden Lion in the prestigious Venice Film Festival.

In a dim room man is smoking a cigarette while lighting some incense for the altar. The sounds of radio occasionally interrupted by woman wailing in pains of labor. He puts out a cigarette before praying (拜拜). A historic radio announcement by Emperor Hirohito, the Jewel Voice broadcast, announces the Japan’s defeat in the war. Electricity starts working again and the lamps lights up as the child’s scream fills the room. “It’s a boy”, – says the voice off screen. Father names him Kang-ming, meaning “light”.  And just like the child, Taiwan is reborn.  In pain.

The opening scenes transfers us into the precise pivotal time in history.  The Japan capitulation ended their aggressive colonial expansion in Asia that started in the Meiji era (1868-1912). After the first Sino-Japanese war, the Treaty of Shimonoseki was signed in 1895 by the Qing dynasty, which among other things, ceded Taiwan to Japan. Japan has been in charge of the island all the way up until this opening moment in the film. Hou Hsiao-hsien manages to illustrate the complexity and uncertainty of this situation on a very human level. The leaving Japanese are saying good bye to what has been their home. The staying Japanese are very unsure about their future. Many Taiwanese are joyous about reconnecting with the historic motherland. But, they are also wary due to uncertain state of China itself, which is being torn between the Nationalist movement and Mao’s Communist party.

An early scene which shows a Japanese woman as she says goodbye to a Taiwanese friend before her country withdraws from the nation that it once controlled is deeply affecting and pushes the film away from simple condemnations. The mixture of discontent with the Taiwanese past and the desire to embrace it for making the country what it currently is that exists in City of Sadness paints a distinctly schizophrenic portrait of the nation’s identity. (Source: Movie Martyr)

Just as the Kuomingtan (KMT) nationalist party lead by Chiang Kai-shek, descends to the island, it is apparent that their wariness was not without basis. The central event that became the icon of Taiwanese and Mainland clash was the 228 Incident. It started when Mainland troops beat a woman illegally selling cigarettes (at that time government seized most of the countries production and resold it at vastly inflated prices to support the fight against Communists on the Mainland). Some of the local men stepped out to defend the woman and were gunned down. This incident was a catalyst of anti-government uprisings all other the county that resulted in the killing of many people. The government continued persecutions and systematically killed many Taiwanese intellectuals and other people who might become leaders of the resistance.

The period of martial law after the 228 Incident came to be known as the White Terror, one of the longest periods of martial law in the world. Hou’s movie was made right after the end of this period and many people flocked to the cinema to see the depiction of events that had not been discussed in public all those years. Though many were probably disappointed, as the director chose not to show the core incident. He wanted to portray what happened in periphery, when waves of chaos and terror swept the country from center of Taipei. His choice of characters were not the heroes who went into history pages, but just ordinary people who will never be in a history book. It reminds me of Peque Gallaga’s Filipino classic Oro, plata, mata, that also chose to show war indirectly through lives of people far from front.

Through visual storytelling, the dialogs and on-screen writing we get to know about the fate of the Lin family (or clan, as it is a big extended family living on an estate). The father of the child born in the opening scene is the oldest brother of the Lin family,  Wen-heung. He is brutish looking blunt man, but with a kind heart. He runs a bar called “Little Shanghai”, but his business is often undermined by gangsters.

During the course of World War II as the Japanese needed more and more manpower to fight they began to recruit, and later draft, men into the Japanese Imperial Army and Navy. This was the fate of two of the brothers. The second brother, Wen-leung, comes back from the war zone in shell-shock. He is kept hospitalized and restrained due to violent outbursts. He comes back to his senses, just to be taken into prison and beaten up. After this he lapses back into mental illness and we only see him as a nuisance to the family, living at the estate and always eating the offerings for the altar.

The third brother, physician Wen-sun is never seen. We get to know through dialogs that he is missing in action in the Philippines. His wife ritually keeps hope for his return by daily disinfecting his clinic instruments.

The character who is most central throughout the story is the youngest brother Wen-ching, brilliantly played by Hong Kong actor Tony Leung. His pivotal role in the film is not so much about what he does, as there are no heroes in Hou’s film, it is more about what he comes to represent. Wen-ching is a deaf-mute, and as it happens in many incidences through complexity of making a film, it was accidental. Casting Tony Leung came with limitations – he did not speak Taiwanese, as the local actors. His inability to express himself and helplessness in the violent turmoil becomes a metaphor for the inability of the Taiwanese people to voice their outrage in this complex situation.

On the other hand, only being able to communicate through writing enabled him to broadly connect with Taiwanese, Mainland Chinese, Shanghainese and Japanese. They all use same written characters (although some meanings are different and the Japanese language is not part of Sino-Tibetian language family, most Japanese kanji have the same meanings). Different spoken dialects provide basis for misunderstandings and alienation, but the written language reminds of intimate cultural relations that these East Asian countries have had for centuries. More than that, this “effect” manages to capture universal human trait that brings so much sorrow – how our thoughts, speech and actions can be in absolute incoherence with each other.

Just as the movie title promised, this family story is not a happy one. City of Sadness is so effective not because it tells of a unique tragic national experience, as all countries have had tragedies, and the turbulent events of the 20th century created tragedies worldwide. Hou’s films, are compared to Ozu Yasuziro,  in that they are more like a existential lament about the tragedies people endure during historical changes. As one commenter on IMDB expressed:

This one is one of the most profound statements about human condition and the relentless power of history. You can physically feel the winds of history blowing through a small hospital in the mountains, or a house of the person who will succumb to the inevitable, or a railway car caught in the middle of a massacre. Hou Hsiao-Hsien doesn’t reconstruct history, he shows you human beings caught unawares and unable to cope with a totally unexpected avalanche of events destined to change their lives.

City of Sadness touched every viewer as a subtle reminder of our own mortality and humbles the ego showing insignificance of an individual. But it also provides strength to continue despite this perilous revelation. As the closing scene dims into the darkness from a dining room, where this family torn by tragedies, has their dinner, just like any other evening, so we are reminded of the relentless bravery and desire to live on and exist another day despite the prevalent condition of human suffering.