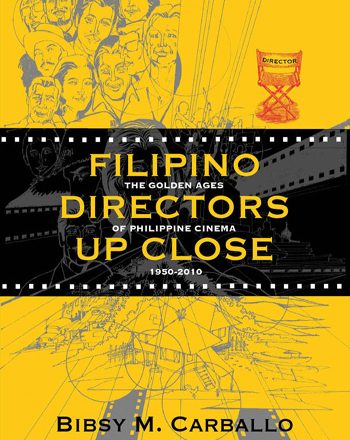 It is a rare thing to find books on Philippine cinema on physical bookstore shelves, thus I was overjoyed finding this Filipino Directors Up Close casually browsing in one of the huge Manila’s shopping malls. It has an inviting and playfully bright orange cover and curious snippets on the back, like:

Did You Know
That Lino Brocka had prepared himself to be President of the Philippines one day?
That during screenings of Lav Diaz’s 11-hour Ebolusyon in Europe, sofa beds, all-night coffee, and standby masseurs made the viewing palatable?

No, book, I did not know that. So I got it right away.

The book’s introduction starts similarly to Bienvenido Lumbera Re-Viewing Filipino Cinema, with a lament that English-educated, westernized Filipinos know nothing of their own country’s rich film heritage.

Like many other normal Filipino (mis?)educated in English-speaking schools, brought up watching Hollywood movies, it was late in life that we discovered the wonders of the Philippine cinema.

Then one-by-one the book overviews the greatest Filipino directors starting from 50s all the way into modern day. Instead of taking a more academic approach, as many other film books do, this book strives for more human-level essays about the directors and their films. This is certainly a great read and made me add a lot of new films to my to-watch list.

Find Filipino Directors Up Close – The Golden Ages of Philippine Cinema on Amazon.(1950-2010)