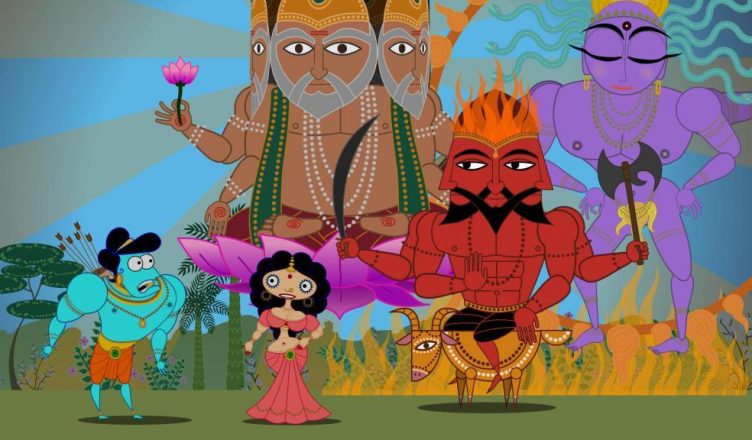 When East meets West some of the most interesting cultural and artistic endeavors happen in the process. During this process the stories, the myths that we grew up with, those that invisibly permeate our very existence, are taken apart in front of our very eyes. Maybe for the first time we realize that these stories that serve as a blueprint of one culture, do not necessarily exist in another, that they may be just an object of curiosity in the eyes of those others. It is a humbling experience, but also an opening one, opening to new paradigms. Nina Palaey’s Sita Sings the Blues is exactly the kind of welcome example of such cross-cultural artistic encounters, captured in a beautiful and easily accessible animated form.

Two stories are being narrated in parallel. Two stories that seemingly could hardly be any more different – One in modern day San Francisco, the other back in the legendary times of the Hindu epic, The Ramayana.

Dave, Nina and their cat Lexi, live in a cozy San Francisco apartment. Life seems idyllic and perfect until Dave gets  invited to India for a temporary job. However, the job becomes less and less temporary while he grows more and more cold to his significant other Nina. Then she gets a chilling email, such as only our modern communication technology can deliver, both awful and kind of normal: “Don’t come back. Love, Dave”. Devastated, on a cold winter in Brooklyn, she turns to ancient Hindu epic, maybe trying to find some meaning for it all in the wisdom of ancients.

The Ramayana is one of the most monumental and important pieces of literature in history. It is not just a set of mythology, it is a guide for virtues and ideal relationships in a society. It is a story of prince Rama, a seventh avatar of supreme Hindu god Vishnu. Born to Dasharatha, a King of Ayodhya, Rama is an example of piety, virtues and relentless following of dhrama – the right way of living in harmony with cosmic laws. Rama is loved by everyone and is about to be crowned and take over the kingdom.

However, Kaikeyi, the third wife of the old king intervenes in the coronation. Tainted by evil old maidservant Manthara, Kaikeyi succumbs to jealousy and proclaims that her son should be crowned as the heir instead and Rama should be banished to the forests for 14 years. She reminds her husband about his promises made when she saved him from demons, and he, as a righteous man and ruler, must fulfill her will. Thus Rama is exiled, and Sita, his wife insists on following him.

The evil king of demons, Ravana, from Kingdom of Lanka hears about Sita’s beauty. Ravana uses demons to trick Rama and kidnaps Sita. Rama is devastated when he finds out that Sita is gone. He travels to find her and meets with Hanuman, the great monkey hero. Rama helps Hanuman and his fellow monkey lord, Sugriva, to take back their kingdom, and in exchange they help Rama to find Sita. Upon finding her whereabouts in Lanka, Hanuman and the monkey army build a bridge from the continent to an island and attack it. Eventually they do rescue Sita, but after being in captivity for so long, she is asked to perform agni pariksha, a test of fire to prove her pureness. Once she steps into the fire Lord Agni saves her, thus proving her innocence. After all adventures there is a long period of Rama ruling in Ayodhya. However, the rumors of Sita’s impurity are still prevalent among the people, so Rama must banish her. She leaves to woods and meets Valmiki (who is believed to be the author of The Ramayana) and tells him her story.

In the forest she gives birth to two sons who grow up reciting verses to Rama’s greatness, not knowing that he is their father. One day Rama hears and finds them and is very moved upon realizing that they are his offspring and takes them to the palace. However, he still cannot take back Sita. Devastated she asks mother Earth, Bhumi-Devi, to take her back to her womb, releasing her from more suffering in this unjust world.

These are the basic parts of the whole epic that the animation goes through (Otherwise, it has an incredible number of stories, one of undertakings to tell them all in detail was a 2008 TV series, Ramayan, with 300 episodes!). Encoded in these very exciting and eventful stories are moral codes for an ideal ruler, ideal son, ideal younger brother, ideal wife, ideal servant. Just like Confucian, Christian or Muslim ideals – these are not easy to attain in daily reality, but nonetheless they are something to strive for.

Virtuous son – Rama obeys his father’s decree to leave for 14 years without a question. The old king dies of sorrow for having expelled Rama and leaves the kingdom in the hands of third wife’s Kaikeyi’s son, who actually refuses to rule and goes to find Rama. However, Rama then does not agree to go back, as then their father’s sacrifice would have been in vain. Thus piety towards father is more important than obligations to kingdom.

Ideal ruler – Being an ideal ruler means making hard personal decisions for the good of the people – we can see this when Rama is forced to expel Sita, for the reason that the subjects do not trust her purity, and so would not trust her offspring’s legitimacy to rule. Therefore obligations to the kingdom are more important than the love preference of an individual – even a king must make sacrifices.

On a higher level, Rama’s journey is a set example how to live your cosmic dharma. In a big-picture story Vishnu was born as Rama for the exact reason to fight Ravana. Eons before Ravana was blessed by Brahma, the Supreme God Creator, so no god, demon or spirit could kill him. Thus Vishnu had to be born as human to go around this blessing. Thus all these events are a predestined play of cosmic theater. The whole Ramayana is just a tiny part of whole cosmic stories, that go beyond imagination of humans.

In Hinduism one epoch – yuga – is a time period when the universe is brought to existence and destroyed. This happens every 4.1 to 8.2 billion years! Which is one full day and night for the creator god Brahma!  In this perspective any events in human time scale are insignificant and any effort to label actions of individuals as good and bad, moral or immoral, is rendered pointless. All seemingly “evil” actors, as the housemaid who poisoned wife Kayiki’s mind, or even Ravana, are just fulfilling their role in the cosmic scheme of events. Just thinking about these astronomical numbers is humbling and somewhat relaxing, unlike the intensity of having one life, one soul and one chance to make it right. This reminds me of passage in Yann Martel’s Life of Pi, where Hinduism meets Christianity and is quite overwhelmed:

Christianity is a religion in a rush. Look at the world created in seven days. Even on a symbolic level, that’s creation in a frenzy. To one born in a religion where the battle for a single soul can be a relay race run over many centuries, with innumerable generations passing along the baton, the quick resolution of Christianity has a dizzying effect. If Hinduism flows placidly like the Ganges, then Christianity bustles like Toronto at rush hour. It’s a religion as swift as a swallow, as urgent as an ambulance. It turns on a dime, expresses itself in an instant. In a moment you are lost and saved. Christianity stretches back through the ages, but in essence it exists only at one time: right now.

Of course, this Supreme-God-Battle is not the only possible take-away or interpretation of the rich text. Sita Sings the Blues takes on Sita’s fate and renders thoroughly a more contemporary female perspective. Being an avatar of Lakshmi, wife of Vishnu, she could take all challenges and follow her dharma with un-shattered devotion, but what would a mere mortal woman feel? Probably not be as stoic as the legendary Nepalese princess.

Nina Paley actually leaves the narration of Ramayana to born Hindu people themselves. The three characters are depicted as traditional shadow puppets. Their unscripted efforts to recall the specific facts of Ramayana events lead to many funny animation scenes. The whole film uses different animation forms: from traditional Rajput painting, to vector graphics (these parts with beautiful jazz songs by Annette Hanshaw), to Squigglevision technique, making it an exciting kaleidoscope of moving pictures. (Source: Wikipedia)

Sita Sings the Blues is a great example where artistic honesty and curiosity triumphs over the entitlement of certain cultural, religious and academic entities as owners of one and only key to unlock interpretations of ancient texts. And it is a very welcome one. Many cultural dialogs happen in antagonistic religious discussions and elaborate academic papers on one extreme, and Namaste stickers and incorrect Asian symbol tattoos on the other. Nina Paley’s animation falls somewhere in between, approaching it on a very human level: “These are your stories and this is how I see it and how I think it related to me. What do you think?”. This animation is an enchanting experience that can be enjoyed by those who have never heard of Hindu epics, or had their whole childhood marked by them. Even more, the author is avid fighter for creative freedom and animation is under Creative Commons copyright, making it available for everyone to see online for free (even in HD!). Watch, enjoy and share: