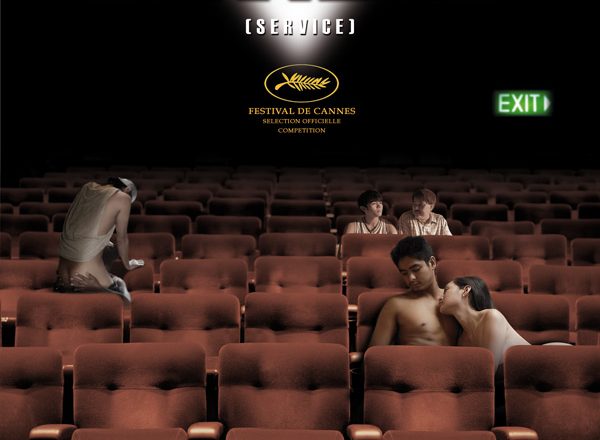 Brilliante (Dante) Mendoza came into the film industry later in his life – at the age of 45, and started rocking the boat right away. His original auteur films tend to have highly controversial reviews, and even those that got into the Cannes Film Festival ended up being either highly praised or highly despised by the critics. “Service” is indeed one of those films – you either love it or you hate it.

Back when privately owned movie theaters were a profitable business, the Pineda family were prestigious as they owned a large theater. However, now the rundown old theater serves as a meeting place for gays selling sex services (thus we have a Tagalog word “Serbis” as the title of the movie). While the theater runs porn movies, that nobody really watches, the Pinedas try to make their life experience meaningful in their own ways. The old matriarch Nanay Flor (Gina Pareno) is very engaged in suing her husband for infidelity. Her daughter Nayda, tries to maintain the theater and to raise her little son Jonas. They both provide a kind of dualistic reality – though they do work at this porn-theater-made-into-gay-sex-hub, they do not seem to belong here. They are very strong personalities with high moral values and standards, but still trapped in this awkward situation.

Another family character is cousin Alan (Coco Martin). He is painter, making sexy posters for the theater and he does other menial jobs, like cleaning clogged toilets. He has a girlfriend Merly (Mercedes Cabral), who announces her pregnancy to the dismay and despair of Nanay Flor and Nayda. Another problem, another mouth, and an unwanted wedding. Another “character” that grossed out a lot of people in Cannes and beyond is Alan’s festering boil on his ass. The camera attention to it, and Alan’s ways of solving his skin problem, are body horror genre worthy, Cronenbergesque vision.

Other characters are not that impressive, except the Theater itself. It is a massive, seemingly endless structure and we get to tour it a lot as the camera follows family members, random thief chase and wondering goat. In some ways it reminds of Tsai Ming-liang’s “Good Bye, Dragon In”, though camera movement (or no movement in Tsai’s case) and the aesthetics are different. The other big difference is the soundtrack. While Tsai uses silence and very delicate background sounds, “Serbis” is overwhelmed with traffic sounds from outside all the time.

Artistic auteur films are usually more open for personal interpretation – I will use this freedom. For me “Service” is mostly about the decay of the old era of movie theaters. First television then multiplex theatres, and then the internet all doomed the grand single movie family owned theaters. Now only big chain-theaters, IMAX-style joined with big shopping malls are the ones that can thrive. It is a rarity to see any privately owned small theater screening not blockbuster films. There is a blogger who travels around Southeast Asia photographing old abandoned movie theaters, reminiscence of the golden age. (You can see the project here: SEA Theater). The Pineda family is clinging to something that is passé, a relic from the past that can no longer exist. This creates their weird realm of reality, where the high moral values of Nanay Flor and Nayda exist in their very immoral reality. Such dissonance, plus the endless theater where everything happens, creates a quite surreal film experience.
I did enjoy this film, but as in every auteur case – it is not for everyone. As Roger Ebert pointed out:

If you see only one art film this month, this shouldn’t be the one. If you see one every week, you might admire it. (Source: Roger Ebert)