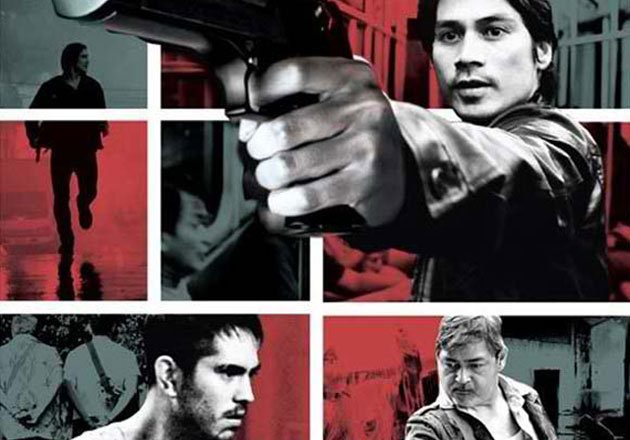 On the Job on Amazon.

Erik Matti paces “On the Job” with a temper of Guy Ritchie and engrosses into grit and blood with a pleasure of Quentin Tarantino. The result it masterfully crafted crime thriller about a tangle of corruption that leaves no hope.

The story opens with two main characters – Tatang (Joel Torre) and Daniel (Gerald Andersan) walking down a busy street of Quezon City, Metro Manila. A festival (that looks like Songkran festival as everybody is pouring water over each other) has filled the streets with cheer and chaos. From the first moments we recognize our characters as polar opposites – Daniel is young, energetic, careless, even a bit goofy, while Tatang is older, calm, focused and grim. With no-bullshit attitude, he teaches the youngster to be more attentive to the surroundings. With overwhelming intensity we are waiting to see what our characters are doing there, as it is clear they are not there to enjoy the festival. Tatang focuses on the target, steps forward, the sounds of festival are silenced to hear a clear sounds of a gunshot. A second shot to make sure the man is dead. They run away along with scared crowds of people.

The director Erik Matti does not give many details to explain situation as the few plot storied unfold as pieces of puzzle for the viewer to solve. As an all-knowing storymaster he is out there giving the viewer a piece to make one develop a theory and then another piece to make all assumptions void. This game is among other great aspects something that can keep you glued to the film if you can accept its rules.

Just after the shooting, the credits roll with some news stories about drug lords. So is Tatang and Daniel self proclaimed vigilantes fighting the crime? No, they are prisoners at a local jail. So do they belong to a vigilante circle that uses good-willing prisoners? Again, no.

“This is just work. It’s easy to kill if you’re angry with a person. What if you’re ordered to kill an old man who can barely walk? Could you still do it?”

Meanwhile few other stories unfold. Francis (Piolo Pascual) is a son-in-law of a powerful politician. He is given the case of the shootings, though his efforts to solve it are hindered by the small “favors” his father-in-law is asking. And the last side plot is of the sergeant Acosta (Joey Marquez), one of the few uncorrupt good cops, honestly trying to get to the truth in the shooting case. Francis and Acosta clash at first, but soon Francis realizes he is being played and they join efforts.  Eventually he has to make a decision to stay loyal to family or to his moral principles.

On one hand, “OTJ” is about The Law against The Crime. However, the line between Good and Evil is blurred and in the end the only looming evil is The Man, the Big Brother, the corrupt controlling government. We can emphasize with all of the characters. Tatang is a cold-blooded hitman, but also loving father and husband trying to take the family out of poverty. Cocky Daniel is also helping his family and just trying to build something for himself in a desperate situation. We never even get to know why they are in the jail in first place. Sergant Acosta, constantly losing the battle for the good, even in his own family, where his son becomes a criminal. And Francis, having to choose between comforting but morally ambiguous life or risking it all, including his beloved wife, to do the right thing. Story unfolds with some funny scenes, even some hopeful scenes but only to end in absolute desperation. Every hope is crushed by the Forces That Be, who are playing and toying with everyone through their web of corruptness. The most desperate character for me was Tatang, who upon realizing he has nothing to live for outside prison, destroys everything and goes back behind bars. The closing scene shows him through a car window, view blurred by falling rain, a man with nothing to lose with an empty look on his face.

Apart from great story, what makes this film so enjoyable is masterful camerawork by Ricardo Buhay III, editing by Jay Halili and soundtrack by Erwin Romulo. The perfect pacing of camerawork and the music is mesmerizing. One of the best examples is the scene in the hospital where Tatang has to finish the hit job. One of the best scenes of such type that can be put in the same ranks as Guy Richie’s “Snatch” and “Lock Stock and Two Smoking Barrels”. The following chase scene in dark streets of Metro Manila is superb as well. Shaking camera and blurry dark scenes add to the intensity. Talking about Manila, in “On the Job” it is portrayed as the type of noir sin city, like Los Angeles in “Chinatown”, Bangkok in “Ong Bak” and Mumbay in “Talaash”. And as the noir genre requires, most characters are lost in the darkness of its crime-filled alleys.

Movies that portray dissatisfaction with the government are not new to Filipino cinema. Films made under Marcos dictatorship and martial law in the Philippines (1972-1986) had more subtle allusions to what was going on in the country. Few examples: Mike de Leon’s “Batch 81” (1982) and Ishmael Bernal’s “Manila By Night, a.k.a. City After Dark”. “OTJ” is much more direct blow on the corrupt government system and its moral consequences in society. Though overall film is more focused on crafting chase scenes and shootings, it manages to bring the moral statement as well as masterfully packed crime-thriller action.