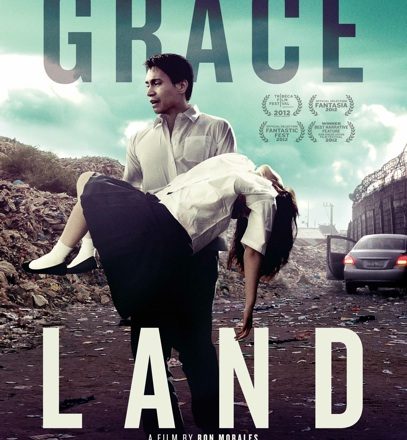 The director Ron Morales takes the social problems of the Philippines strips them down and shows them bare naked in his gritty, dark film “Graceland”. From the Garbage Mountains, to infamous karaoke-bars-turned sex-trafficking-joints with underage girls, the movie takes us to places in Metro Manila where we would not like to stumble upon, but they are part of the reality in the Philippines.

Marlon Villar (Arnold Reyes) is a chauffeur for a wealthy congressman Changho’s family by day and the congressman’s clean-up guy by night. Changho has a habit of spending some nights away from his family in gritty motels accompanied by underage girls. Marlon is clearly not in favor of this habit. We see him disturbed when looking at a naked 14 year old girl’s body, lying on a bed like a rag, drugged and abused. But doing anything about it would hinder the secure income to his poor family. He is raising a teenage daughter and has a wife in the hospital, waiting for an organ transplant. Thus good morality has to wait.

With this premise we are introduced to a dualistic reality of the Philippines: the wealthy who can get away with anything, and the poor, who remain in silent servitude. However, sometimes a line is crossed where no money can pay ones way out of and “karma bites back”. Marlon picks up his daughter and Chango’s daughter from school. The car is stopped by a policeman. But apparently it is only a scheme of kidnappers going after Chango’s daughter. In a mix up, they shoot the daughter and kidnap Marlon’s daughter. Realizing the mistake they start using Marlon to get Changho’s money in return for his daughter’s life. Now the desperate man is caught in a crossfire between kidnappers and police trying to figure out the case. As the story unfolds we see that maybe Marlon is not just an innocent actor caught in a bad-place-bad-time story.

This “kidnapping gone wrong” story reminds me of Park Chan-wook’s “Sympathy for Mr. Vengeance”. There are a few plot similarities, though Morales is more up-front dark and gritty, where Park Chan-wook uses more irony and absurd situations. Both directors use class struggle as a plot driver and place their characters in very desperate situations. Then they watch how morality, which is supposedly the virtue of the lower class, that they can hold as superiority against a corrupt upper class, is obscured and shifted. Then the main characters have to realize that they are now the same as the enemy they were fighting against. Thus they are punished (Park Chan-wook punished his characters much more brutally though).

“Graceland” also has postcolonial deconstruction as part of the film dimensions. As director expressed in the interview with “Blouin Art Info”: They are somewhat of a subservient society because they have been colonized and there’s a colonial mentality that’s still there.” (Source: Blouinartinfo). In the film he pokes at it and shakes the concept. If you are in service to someone and you do immoral and illegal things, you are accountable and an accomplice. Thus “I am a lowly servant” is not an excuse. In the film Marlon gets a lot of heat and his own “karma biting back”, because of dark deeds done for his employer. This moral ambiguity and other plot parts revealed later, make Marlon an interesting and complex hero character. It is a pity that the movie was rushing in a fast pace to tell its story and did not have more time to develop its characters.

Through made on a low budget, “Graceland” truly stands out in the landscape of Filipino film. Its bold tackling of difficult subjects and showing them in a very direct visual way is a rare finding in film industry where mainstream is occupied by romantic comedies and cheap horrors. It is a movie that will make one feel like taking a long, hot shower after going through all the dirt and grit on the screen. Assuming this was the exact intention of filmmakers, “Graceland” is on a list of must-see from the land of the Philippines.