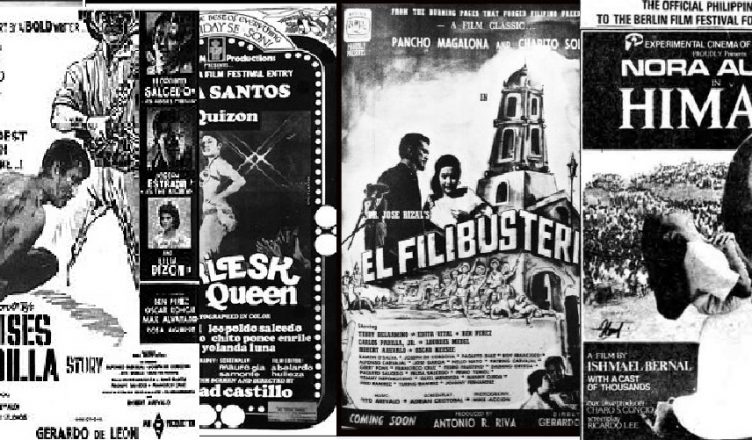 Over a year ago, pinoy rebyu asked me to submit a list of what I consider to be the greatest Filipino films. I referred them to my old list.

Then I thought about it: the list is nine years old. Does it still hold up? Has my canon changed? Have I changed? Yes apparently and yes. “Change or die,” someone once said–which doesn’t come off as a threat to me, more an observation: I’m alive (or as alive as I’ll ever be) and being alive I change. So does my list.

Interesting to compare it to the online magazine’s official list–many of my top choices end up in the bottom or middle range, or not mentioned at all; I’m guessing the top ten are composed of the usual suspects (koff koff Brocka, Bernal, Mike and Gerry De Leon koff).

Nothing wrong with that–there has to be a widely accepted canon, else what am I setting myself in opposition against? On the other hand, I have to be free to choose my own canon, else what good am I?

A few things: this list cannot be perfect, comprehensive, complete. We’ve lost so many of our films in a kind of accelerating cultural Alzheimer’s, a tragedy I would argue comparable to many recent disasters, only instead of lives lost we’re losing our identity, our sense of self, and how good we can be. This at most is a list of what I believe are the finest films I’ve managed to see, to date.

A film’s composed of many elements–not just imagery but dialogue, sound, music, and (a special subset of ‘imagery’), color, movement, people’s hands, eyes, faces; of all these elements arguably the most expressive are the last three (then again rules or at least assertions are made to be broken–just ask Michael Powell, or Robert Bresson).

And a list (even one man’s–any man’s–list, which I consider superior to any aggregate) is ultimately futile, is at most his way of insisting on what he believes are the best, according to his biases and (occasionally, hopefully) his insights.

These for better or worse are mine.

Eddie Romero is best known for his beautifully written picaresque epic Ganito Kami Noon, Paano Kayo Ngayon? (We Were Like This Then; How Are You Doing Now?); I prefer this, where history (from turn-of-the-century Philippines through the Second World War to the recent 1970s) is seen through the eyes of a thoughtful adventurer (the inimitable Fernando Poe, Jr.), and through the lenses of cinematographer Mike De Leon’s (a major filmmaker in his own right) understated yet brilliant camera. The film is arguably Romero’s The Godfather, showcasing the generational passage of time better than any other Filipino film I know.

A triumvirate of women came together to concoct this witches’ brew: Lorna Tolentino (who gives the fearless lead performance); Raquel Villavicencio (who wrote the shapely script); and Laurice Guillen (who gave the picture visual sensuality). The film makes an assertion so outrageous it offends even feminists: that women have the right to be not just sexual beings, but sexually self-destructive beings; the right not just to decide for themselves, but to decide when and how and to whom to submit themselves (a thesis that might have been inspired by or at least accidentally echoes Pauline Reage’s The Story of O). Arguably the finest Filipino erotic film ever made.

Narrative filmmaker Tikoy Aguiluz (using Pete Lacaba’s script) tells the true story of Flor Contemplacion, the hapless housemaid accused of murder in Singapore, same time documentary filmmaker Tikoy Aguiluz (reportedly taking his cue from Monty Python’s And Now For Something Completely Different) tells a larger story, of the Great Diaspora that scattered Filipinos to the far corners of the Earth, and of their collective shock and dismay at the apparent injustice of her execution. With Helen Gamboa giving a great performance as Flor, and Irma Adlawan as a luminous Virginia Parumog.

It’s perhaps due to the lurid premise that Lav Diaz’s storytelling style feels so energized, the filmmaker having given the film an initial jolt of horror and then left the whole ungainly construct to fall apart and collapse into itself. It’s Diaz’s most potent metaphor yet, the Philippines as a continually victimized woman whose injuries are so severe she passes them on to succeeding generations: Diaz struggles to control the metaphor and subsume it into his oblique form of storytelling, and just barely succeeds; the film’s power comes from this struggle.

Mario O’Hara’s extremely low-budget (a mere 3 million pesos, or roughly $65,000) film takes a page from Jean-Luc Godard, Gabriel Garcia Marquez, and Amado V. Hernandez (among many others) to capture in its wide-ranging, free-wheeling, all-too-brief (100 minutes) running time the terrors, triumphs, and tragedy of living in the Philippines during the tumultuous ’80s and 90’s.

Rosa Rosal and Tony Santos again in a struggle for survival, this time in the gorgeous Philippine countryside, under the direction of Manuel Silos; the film’s storytelling has the understated empathy of Renoir, the epic lyricism of Dozhenko–with Silos’ baskets, brimming to overflowing with fat, luscious lanzones, being the Filipino equivalent to Dozhenko’s gigantic pears.

Ishmael Bernal’s most visually striking, most hallucinatory film (cinematography by Bernal’s favorite cameraman Sergio Lobo), the wasted landscape (actually the sandy dunes of Laoag) looking forward to the devastation wreaked by the 1991 Pinatubo eruption. One of the few Filipino films to dare condemn religious institutions for their abuses, one of the even fewer to insist on the primacy of the human–as opposed to divine–spirit.

Lino Brocka’s slum melodrama (based on Mario O’Hara’s teleplay, with unforgettably squalid cinematography from the late, great Conrado Baltazar) is a tight-knitted three-way: mother, daughter, mother’s lover, caught in an endless carousel whirl of lust, jealousy, and revenge that recalls in its compact intensity Shakespeare’s Othello, only filthier (it’s set amongst the squatter shanties of Tondo, with a crucial scene shot on the slopes of Smoky Mountain–literally, a mountain of garbage).

Celso Ad Castillo’s film about an innocent lass turned burlesque dancer is really less about narrative coherence (why is Joonnee Gamboa’s impresario–a great performance, by the way–in this picture, and what, exactly, is he saying?) and more about visual texture and lyricism (the deflowering scene is a montage poem of associative imagery). A masterpiece from what fellow filmmaker Mario O’Hara once called “the finest eye in Philippine Cinema.”

4. Kisapmata (Blink of an Eye)

Mike de Leon’s film adaptation of the Nick Joaquin true-life crime story “The House on Zapote Street” takes elements from Stanley Kubrick’s The Shining and (some say) from his own life, in my opinion improving on its inspirations in terms of comic, claustrophobic horror. Easily his most intense, most hilarious, most personal work–and arguably the most perfect Filipino film ever made.

In mostly Roman Catholic Philippines, this is Gerardo de Leon’s Passion Play, a political tract that transcends propaganda intentions to become a great character study, of the film’s eponymous figure (Leopoldo Salcedo at his most heroic), and of the man who betrays him (former president Joseph Estrada, in the performance of his career)–the latter so compellingly tormented you’re unsure who suffers more, the Christ figure or his reluctant Judas.

Mario O’Hara’s masterwork (with lush jungle cinematography by Conrado Baltazar, and period-accurate production design by the great Vicente Bonus) has the rare empathy to understand the wartime Japanese at their worse (and later best), the wartime Filipinos at their best (and–later–worst). Visually and emotionally, the finest Filipino film ever made.

Worked ten years as officer for the Bank of the Philippine Islands while writing film criticism for Businessworld (still writing for Businessworld). Wrote for Film Comment, Cahiers du Cinema Espana, Rogue Magazine Philippines, and Chris Fujiwara’s The Little Black Book of Movies, among others. Wrote for Rotterdam, the San Francisco International Asian American Film Festival, and others. Curated a programme of Filipino films for the 2006 Rotterdam Film Festival. Helped develop and write the screenplay of Tikoy Aguiluz’s Rizal in Dapitan (1997). Translated Filipino films into English for international screenings.

Published a book–Critic After Dark: A Review of Philippine Cinema–-in 2005, and maintains a blog.

Has no regrets. So far.