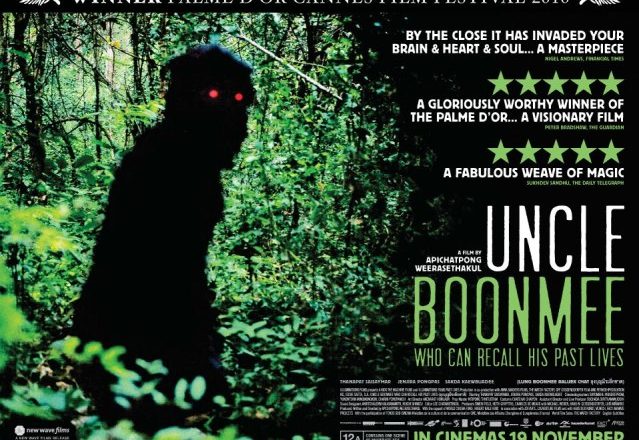 “Uncle Boonmee Who Can Recall His Past Lives” on Amazon.

“Uncle Boonmee Who Can Recall His Past lives” is part of multi-platform art project called “Primitive”. It is a memoir project, dramatizing violent events that took place in 1965 in the village of Nabula, near the Thai-Lao border. During this event, the Thai army killed many communist sympathizers. (Source: Wikipedia) Winner of the Palm d’Or at the 2010 Cannes Film Festival, it is certainly not a typical war memoir film. Many critics define “Uncle Boonmee” as simply art-house cinema, but because of its editing, visual style and political commentary, I also see the influence of French New Wave. Additionally, it is a strong Auteur film piece with a very personal vision. The director confirms this by saying:

But I’m not making a political film – it’s more like a personal diary. (Source: The Nation)

In the movie, Uncle Boonmee, a farmer in Northern Thailand, is dying from kidney failure. He is being taken care of by his sister-in-law Aunty Jen, his nephew Thong, and the Laotian worker Jaai. As his death comes nearer, mystical and supernatural encounters begin to occur. First, during a dinner, Boonmee’s dead wife’s ghost appears and starts talking to them. Then, his long lost son Boonsong appears as a monkey-creature, and tells the story how he disappeared (later in the movie it shows that these monkey-creatures are metaphors for communists, so it becomes clear that Boonsong disappeared because he joined their ranks). Neither encounter surprises the characters too much, as they seem to consider spirits and the supernatural as norms in their world. When night falls again, the movie descends into a dream of a past life, where we see a Thai princess crying for her long lost beauty. It was an enchanting theatrical piece, during which she gives all her belongings, treasures and her body to the Spirit of the Lake, hoping he will restore her beauty. Back from the dream, Boonmee wonders if it is because of karma that he has to suffer the disease, as he did kill a lot of communists and bugs in his life. His wife ghost assures him, however, that it is the intent behind his actions that matters, not the actions themselves. She prepares him for his last journey, and both the dead and the alive travel to a cave where Boonmie dies/is reborn.

This cave, it’s like a womb, isn’t it? I was born here in a life I can’t recall. I only know I was born here. I don’t know if I was a human or an animal, a woman or a man.

Watching “Uncle Boonmee” is like peeking through a hole into a world of very different aesthetics, culture, and sensibilities. The mystical realm exists alongside normal everyday life, and past and present mix with each other. Animals, humans, and spirits all seem to come and go in the scenery of the Thai jungle and caves – more permanent places. There is some political commentary against militarism, and while it stays mostly in the background of film, it is always present in metaphors. The movie also comments against forced nationalism, which creates “The Other” for the nation to unite and fight against. For the Thai, this kind of created arch-nemesis has typically been the Burmese, but this movie examines Thai-Lao relations. The absurdity of these border-based artificial distinctions is revealed in one dialogue, where Auntie Jen is worried about the Laotian worker, Jaai:

Aren’t you afraid of these illegal immigrants? They can rob you, kill you and disappear.

The nephew, Thong, even thinks that he is speaking a Thai Isaan dialect, as he is from a nearby region across the Mekong river, but Auntie corrects him, saying it’s Lao language (though I assume they would be very similar). In reality, there are not many differences between Jaai and the Thai characters, except those that the characters create in their minds.

The extreme example of “The Other” is the communists, who are shown as monkey-creatures, hunted by militia. In one of his life-visions, Boonmee sees a future city ruled by an authority that is “able to make anybody disappear”. There, he himself is one of the monkey-people, or “past people”, as he refers to them. This comes as a kind of karmic irony, since in this life Boonmee was killing the communists. He was the militia.

The narrative is not cohesive, so stories simply float together in this partially magical, partially ultra-realistic realm. They are connected just by the sense of the frailty of human life, the absurdity of man-made distinction of us versus them, beautiful or ugly, Thai or Lao, past or future, and dead or alive. While the distinctions, and the people fussing over them, are absurd, the movie does not really give any solution or way out from this samsara (cycle of life and death).

All things considered, I am very conflicted about this film. While some parts were haunting and enchanting, other long takes of meaningless things were painful to watch. It could be compared to the reviewed art-house film, “Good Bye, Dragon Inn”, however while “Dragon Inn” had a coherent and enchanting visual style, “Uncle Boonmee” is a mosaic of styles. The film has at least six different styles, inspired by old Thai television shows, comic books, costume dramas, documentaries, experimental long takes and others. The styles are eclectic, and made without aesthetic transitions, and they do not blend together in any way. To me, the movie just seemed to be messy. This movie is also shot with a 16 mm film. (Source: Wikipedia)

The director said that “Uncle Boonmee” is mainly about “objects and people that transform or hybridise.” Wikipedia adds that the central theme is also the “possible extinction of cinema.” I did not sense the director was making this claim (which would be very arrogant and snobbish, I think. Making a film as a monument for “real cinema” that is “going to disappear”), and I assume he intended the form of his film to be a reflection of the transformation and hybridization processes that happens to the objects and humans in the film (so the form of the film becomes a meta-symbol for the film plot). Once again, it resembles the nostalgia for “old cinema” theme of “Good Bye, Dragon, Inn,” but in “Uncle Boonmee’s” case, you have to dig much deeper to get enough information to appreciate this intention.  The movie is on the verge of falling into the category of “complicated just for complication’s sake,” stemming from the notion that something highly artistic should not be comprehendible “for the masses.”

In the end, I do appreciate Auteur film, and as it is such a personal perspective, it will really depend on one’s taste and aesthetic preferences. I personally love early Auteur David Cronenberg movies. They are not widely acclaimed either, and that is absolutely fine. I would not put “Uncle Boonmee” among my top favorites list, but I would absolutely recommend seeing it, and each viewer deciding for themself.

Last note: Apichatpong said that he thinks Boonmee “will be the last film I can do like this (…) it’s time to move on to the other movies.” It will be very interesting to see this director with highly original vision create something different. (Source: The Nation)

A different perspective I enjoyed reading one the movie comes from Jonathan McCalmont’s blog, “Ruthless Culture”.