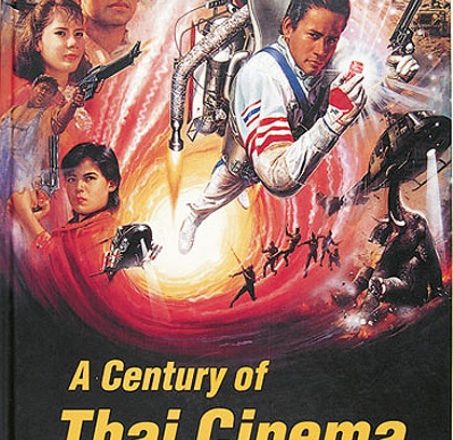 Before I go into the Thai movie month I will begin with an overview of Thai movie history. It dates back all the way to birth of cinema, when brothers Lumière toured Southeast Asia and screened their films. After seeing this, king’s brother Prince Thongthaem Sambassatra went to Europe, brought back the film technology and started making movies. He is considered “the father of Thai cinema”. The Royal family had a big role in developing film industry, especially in the early years. The first Thai feature film was “Miss Suwanna of Siam”. It is a story of beautiful woman, who attracts many men. She searches for true love, has adventures and makes mistakes, has to overcome father’s disapproval and finally finds her soulmate. (Source: Wikipedia). Unfortunately almost no material of this movie survives, as well as of many other early films.

1928 to 1942 is considered the Golden Age of Thai Cinema. It coincided (or maybe it was another cause of film industry rising) with the end of silent film and the beginning of sound. The first sound film was “Long Thang” (Gone Astray) by Wasuwat brothers. Movie is about a man who abandons his wife and goes to Bangkok. It captures the city at that time full of brothels and street shows with erotic entertainment. An observer warns “Bangkok will become like Paris”. Eventually the man goes back to his home and moral lifestyle. (*from “History of Thailand” by C. J. Baker). As an ideological film it was a big success, which led to building of the Sri Kung Talkie Company. In 1933 it made first Thai color film “Pu Som Fao Sap” (Grandpa Som’s Treasure). (Source: Thai Apple)

After the Golden Age period the political leadership of the country is taken over by a dictatorship. During Second World War film industry was made it into national propaganda machine. It was not first time of propaganda in film, as in the early years documentaries were made praising railroad system and other changes that government was doing. Industrialization and implementation of such technologies always comes with sacrifices. It was the role of such propaganda documentaries to show people why it is a good thing and why they should be proud of it. With it even in early stages we see the contradiction of medium of film – it most realistic and at the same time most unrealistic. Even though it shows the reality, it is edited and selected reality, which could never encompass the whole complexity of it. This applies to fiction movies as well as documentaries. I would say especially to documentaries, as we tend to automatically see them as “real”, “documented”, and are not critical about the content. This bias was used by all governments, especially after sound film was developed. With the power of image plus speech it was easy to convey message to the masses. This was seen in Thai movie industry as well as other countries around the world.

Going back to the film history: in 1970’s to boost the local film industry a heavy tax for foreign films was enforced. Many films were made, however the quality was questionable in many cases. Critics had a word for the popular low budget action movies “nam nao” or “stinking water”. Next decade Hollywood movies came back and, just like in most countries in the world, because of Hollywood local production declined. The revival, or “Thai New Wave” began with 1997 Nonzee Nimibutr’s crime drama “Dang Bireley’s and Young Gangsters” (2499 Antapan Krong Muang). Since then Thai movies started to gain presence in international movie festivals after a long break. (Surce: Wikipedia)

Note about short movies in Thailand

As the 9FilmFest is approaching, I will add additional note about short movies in my posts.

With the rise of independent cinema short movies became popular and featured in festivals. First Thai short movie selected in Cannes was “Graceland” by Anocha Suwichakornpong. I really like the artsist’s statement about the movie, which shows how deep and insightful a short can be. It islike poetry of cinema:

Graceland is a film about journey, in all senses of the word. As the film begins, Jon and the mysterious woman embark on the journey together. While it is clear that their point of departure is Bangkok, their destination remains unknown. For both characters, but especially Jon, this is a physical as well as an emotional journey. The further they are away from the city, the closer they are to their true emotions. Slowly, the characters shed off the material comforts, one after another, until they are stripped bare to their souls. However, this is not a classic tale of two lost souls finding one another in the dead of the night. Jon is not an archetype of a hero, or even anti-hero. Is there anything special about him? I do not think so — which precisely what makes him special. He is just an ordinary guy who happens to find himself under extraordinary circumstances. It is what happens to him during the course of one night’s journey, how he chooses to deal with it, and how he is affected by these events that are the focuses of the film. For Jon, the strange encounter with the mysterious woman does not change his life. One night with the woman, no matter how significant it may feel while it is happening will not change the fact that it is not a life-changing experience, but simply an experience – something to look back on comes the next morning. Nonetheless, what this experience does is that it reveals the fragility of the human heart. It must be acknowledged that Graceland was partly inspired by a classic Hollywood film “The Wizard of Oz”. Both Dorothy and Jon want to escape from their harsh realities, and for a while, they both manage to escape to a faraway land — somewhere over the rainbow. There is not a moment in Oz as heartbreaking as when Dorothy wakes up the next morning and finds herself back in the comfort of her own home — or so it seems. (Source: Art Action)

9FilmFest encourages film makers not only from Thailand, but all over the world to submit their short films. If anyone reading is from Thailand they have a lot of useful workshops about movie making, all listed in their website.

But short films are not inferior, just different. I think the short gives a freedom to film-makers. What’s appealing is that you don’t have as much responsibility for storytelling and plot. They can be more like a portrait, or a poem. Jane Campion