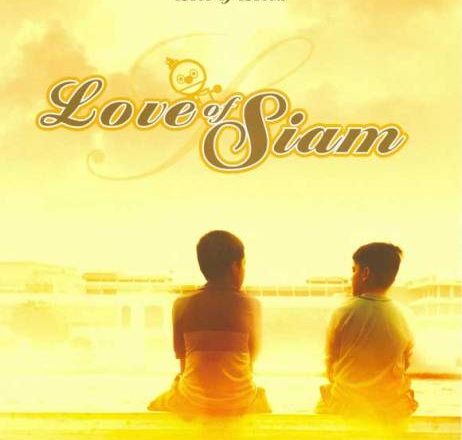 The Love of Siam (รักแห่งสยาม)

“Love of Siam” on Amazon.

“The Love of Siam” is a teen love story with a twist. The twist is that it’s a gay teen romance story, which is a very unusual topic to pursue. Interestingly, the twist was not revealed before releasing the movie, and it was marketed as the typical teen romance. This caused a lot of controversy among Thai audiences. The director said that his goal was to reach wider audiences than it would have if it were framed as a “gay movie.” I think that was a great choice, as “The Love of Siam” is about many kind of love – for family, for music, for the special other. More than that, it is about separation, and coping with being apart from ones who you love.

The story is multilayered and quite long (I watched the Director’s cut version, so it was even longer). Mew and Tong were neighbors as young boys. Over time, they developed a close friendship until a tragedy happened in Tong’s family. His older sister Tang went missing during a hike in Chang Mai. She was not found for months, and grieving family moved away, leaving young Mew without close friend. This sets the emotional premise of the story, as interestingly, the credits and title of the film only appear after this point. Mew and Tong meet again in high school, and by then, Mew is the lead singer in a rising band, “August”. Tong is in a failing relationship with a high-maintenance girlfriend, Donut; and Tong’s family is still torn by the tragedy of his missing sister. The father has become a depressed alcoholic, and the mother is trying to cope with everything by obsessively controlling family life. When Mew and Tong meet, the chemistry they previously had is rekindled, and then develops into something more. There is another secret love blooming as well, as Mew’s neighbor Ying has a huge crush on Mew. She tries all kinds of silly voodoo magic tricks from a book to get Mew’s attention, but Mew is already captive to his feelings toward Tong. He starts writing love songs that impress his band and their manager. Their love does not come without resistance from others though. It comes not from friends, but from family; and Tong’s mother is most strongly opposed to it. Mew and Tong’s friends seem to react very well to the situation. Meanwhile, other things are happening in Tong’s family. June, the assistant manager of Mew’s band, looks so much like the long lost daughter, Tang, that the mother develops a plan to use this to heal her family. She employs June to pretend to be Tang to the father, in hopes that he will work though his drinking problem, which is slowly killing him. For awhile, it seems that the story will have a happy ending, but then it surprises the viewers. Nothing dramatic happens, it’s simply people making their own choices, and others having to cope with them. It is a very realistic approach for a film, which gives a pleasurable bittersweet feeling in the end.

The story is shown so nicely, so delicately, that it is beautiful to watch unfold. The director took time to develop the characters and to have viewers care about them. There are no stereotypical characters that you would find in the usual Hollywood teen love story, therefore the film is more capturing, and easily gets you for the whole almost three hours. On one hand, the love between Mew and Tong seems like any other teen romance blooming – the meaningful eye contact, shy smiles, trying to catch what the other is thinking about, and the uncontrollable smiles when the crush calls you on phone. On the other hand, because their love violates an accepted social more among the majority, they find it difficult to express and share it, especially with others. Tong breaks into tears at one point saying:

What am I, Ying? Everybody is upset with me because I don’t know what I am.

The movie was very realistic: the family drama, the confusing emotions, and the fact that you don’t always get what you want. It showed a middle class family life, which was a real contrast from most of the previous Muay Thai films I watched. The other interesting point is that while Tong’s family is Catholic, there was no religious dilemma because of Tong’s preferences. The only objection from his mother was that she expected him to have a “normal” family, and I assume, to continue the family line. Mew (Witwisit Hiranyawongkul) and Tong (Mario Maurer) played their roles very well. Both actors, who are heterosexual, were brave to choose such roles, as in many cases people associate roles with the actors’ personalities. I think the only unrealistic part of the movie was how mature and calm all the teen characters were. It seems that the grownups were less mature than the teens. I liked how supporting Mew’s band was towards his romantic pursuit. While being a good example of how it should be, I do not think it is likely to be so, as there is still a lot of homophobic sentiment in traditional Thai society. Even the director mentions in an interview that:

I didn’t expect such a strong reaction. Maybe I was just too optimistic that homophobia in Thai society had subsided.

“The Love of Siam” also has a beautiful soundtrack. It is filled with love for music, and love expressed through music. The movie is about being human, how human it is to long for love, and how human it is to suffer from separation. Age and sexual preference don’t matter, as the human heart is the same. “As long as you love, you still have hope.”