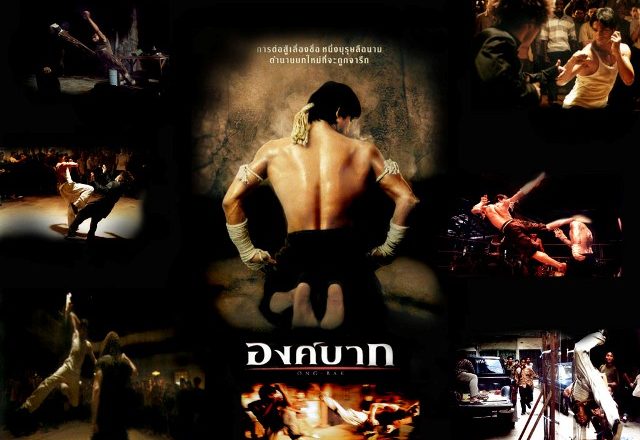 Whenever I hear someone talking about Thai movies, the first one mentioned is “Ong-Bak”. Now I know why – it is definitely one of the best action movies I have ever seen. From the opening scenes it is intriguing, action packed, and beautiful to watch.

The story begins in the rural Thai village of Nong Pradu. Villagers are preparing for a great festival for Ong-Bak, the local Buddha image, which is held only once every 24 years. According to information I found, villagers call this Buddha statue Ong-Bak because of the crack, or “scar” on its face. “Ong” is a term that refers to a Buddha image; and “Bak” means a scar or mark left from a sharp weapon, like a knife or sword. It is not shown in the movie, but the legend of the village says that Burmese soldiers plundered this Buddha during ancient wars. Kru Dum was a brave Muay Thai teacher who risked his life, going into Burmese troop territory to bring the statue back to the village. (Source: ThaiVisa Forum). In the movie, the legend repeats itself. An outsider from Bangkok steals the head of the statue of the deity, and brings it to the capital. According to local belief, if the head does not come back to the village before the festival, they are all doomed. A brave young Muay Thai fighter, Ting, takes up the mission to bring back the head. He sets out to Bangkok where he faces an absolutely different world of illegal fighting, drug dealing and artifact smuggling.

In my previous article about Thai movie history, I mentioned one of early 20th century films, “Long Thang” (Gone Astray). There, a man leaves his wife and goes to Bangkok, which is full of brothels, erotic entertainment and immorality. This 21st century movie shows the same dilemma between the traditional and modern, the countryside and the city. The contrast shown in “Ong-Bak” is very sharp. People from the village are moral, naïve, sincere and well-wishing, while people from city are immoral, greedy, insincere and aggressive. Anyone who goes to the city is corrupted, and getting back to their roots in the countryside is the only escape from the rut. I would usually consider this kind of categorical moral approach as a negative in a film; however, “Ong-Bak” is the type of movie where this approach doesn’t hurt the film, and even adds to it.

One thing I find quite unusual about this movie is the main character, Ting. Tony Yaa plays Ting and does all the impressive stunts himself; however, there was no classic “journey of the hero”. Ting does not seem to change emotionally, morally, or in any way from the beginning to the end. He is focused single-mindedly on his mission, and does whatever it takes to retrieve the lost deity’s head. Of course, maybe because of this single-mindedness (which I assume is a good trait in a well trained warrior), he does not give in to the corruption of the city. If the goal of director was to show Ting as a hardcore, single-minded warrior with no emotion, then Tony Yaa played it well. Otherwise, I find him to be quite bland as a character. Another thing this movie really lacked was the moral wrap-up. In the beginning, Ting’s master forbade him to use his Muay Thai skills. In the city, however, he was forced to do it; and while reluctant, he did not seem to have too much moral conflict over it. After fighting a lot and killing people, he retrieves the head of Ong-Bak, the Buddha, who stands for non-violence. Moreover, in the climax of the movie, it was Buddha’s head that crushed the evil crime lord. Ting comes back to the village, and all ends well. He does not even get scolded by his master for using his Muay Thai, which makes one think that the real moral of the story is: as long as you are using your martial arts skills for a good cause, and killing the baddies, even Buddha will approve and even help out.

Even with the lack of a moral to the story, “Ong-Bak” makes up for it in its entertainment value. The fight scene choreography done by Panna Rittikrai is perfect. Moreover, the camerawork is brilliant, letting you enjoy the stunts from a few different angles. This really captures the essence of the fights, and gets you inside the action. The other wonderful part is the atmosphere of Bangkok that the movie captures. It is rusty, ugly, and at the same time futuristic, reminding me of some movies and computer games. The narrow urban spaces and Asian stylistics reminds me of “Blade Runner”. The other connection I made was with the computer game, “Mass Effect 2”, and the crime capital, Omega. The fact that the crime lord Komtuan is in wheelchair and needs an electrolarnyx to speak is another brilliant touch that adds to the futuristic atmosphere. The fight scenes reminded me of the “Tekken” game series, and I think that “Ong-Bak” had more influence from such video games than from other action movies. It is a very interesting, effective and very well made blend of these different media forms. Moreover, “Ong-Bak” was much better than any “Tekken” movies.

The other underlying thematic I sensed was the desperate fight for survival of the traditional Thai lifestyle. The village seemed so fragile and desperate. The movie clearly hints at the negative influence of Western culture, which has a lot to do with the declining traditions. All foreigners in movie are negative characters, and English is only used in the fight ring. Also, all illegal action happens in Khaosan Road, the most popular tourist place in Bangkok.  The supporting character Humlae, who is Ting’s cousin, before the present story had left the village, dyes his hair blond, and calls himself George. At first, he denies any connections to the village, despising his true name and Ting, and only wants to use his cousin for profit. Unlike the main character, Ting, it is Humlae who experiences a moral journey. He eventually realizes the true values, and sacrifices his life to save the head of Ong-Bak.

In the end, even though heroes defeat the enemy and bring back the Ong-Bak head in time, the view of fest celebrations is only shown briefly, and from afar. There is this sense of uncertainty and fear. Maybe it was just because of rushing the end of the movie and cutting it this way. But if that’s not the case, it has another point to tell. They won the battle against the evil crime lord, but the sin city is still there. To fight against it is rather desperate and pointless. No Muay Thai skills can fight the forces of modernization and urbanization.