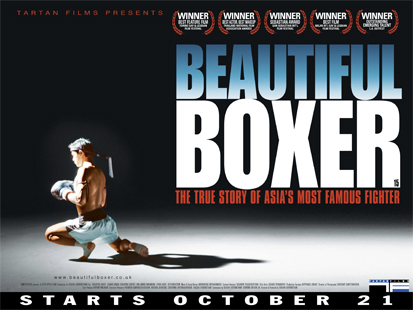 If “Rocky” and “Million Dollar Baby” were crossed together, you would get something like “Beautiful Boxer,” but it is much more. This movie is a tale about struggle to find one’s identity, balancing the worlds of masculinity and femininity, and facing a world of fierce opposition. It a fascinating film that manages to capture so many aspects of Thai culture, while at the time showing a very personal story.

The story is about a boy, Nong Toom, who should have been a girl. He was born to a poor family of lychee farmers in Northern Thailand. At an early age, while at his first temple fair, Toom discovers that he is much more interested in aesthetic and graceful female song-dance performance than in bloody and harsh Muay Thai boxing, like most boys. He grows up being bullied by everyone because of his delicate nature. His parents worry about his future.

If he turns out to be a transvestite, what are we going to do? is the father’s concern.

But there is also a level of acceptance, coming from Buddhist beliefs in karma: “

If he’s fated that way, there’s nothing we can do.

Destiny is sometimes ironic, and Toom starts training in Muay Thai boxing, seemingly in opposition to his nature. At first his motivation is to make money to support his parents, but when he finds beauty in the moves of Muay Thai, he puts his whole heart into training and becomes a great boxer. However, in today’s world, skill is not enough to get into professional leagues and the Lumpini stadium in Bangkok, the ultimate goal of Thai boxers. To achieve this, one needs to have a special quality of interest, a gimmick if you will. Toom’s fascination with makeup becomes exactly the marketing edge that his trainer was looking for. Many famous boxers start challenging Toom, as they want to “beat up the transvestite” who is “trashing the image of Muay Thai.” Toom muses, “It seems the more makeup I put on, the harder my opponents kick me. So I kick them back harder!” Eventually, this existence is just not enough for Toom, as he truly wants to realize his femininity. His inner struggle and suffering is well captured by a conversation between Toom’s father and a doctor,

Sir, your son’s heart has been emotionally crippled for quite awhile now. Operation will merely enable his body and his soul to co-exist more harmoniously.

Eventually, Toom receives his/her inner balance as well as the acceptance of family and the public.

The first and most obvious theme of this film is LGBT rights. The wish to be a woman is something natural for Toom, not due to any traumas or other outer influences. The movie also shows how difficult it is to not only to be accepted by others, but also to accept this uncertain identity of oneself. A strong plus for the movie is not making things too dramatic, nor the character too victimized. The boxing fight scenes provide a good contrast to the softer, emotional parts.

The strongest negative emotion in the story is guilt. In the Buddhist temple, Toom was told that it is because of the sins he committed in his past life that he now has to suffer. Being born as a female in male body is a karmic justice, a punishment.  Not only does Toom have to feel guilty because of his past life, but his so-called “sinful thoughts” may also cause suffering to his parents in this life too, as teachings say. He tries to manage this dilemma by setting a goal to provide for his parents first, and then to pursue his own personal desire. Emphasis is on traditional relationships in many Asian cultures, where parents a highly valued and respected. The theme of balancing the parents’ expectations and individual aspirations and wants is a common topic in movies. Toom feels he has to give even more, to repay others for the disappointment he thinks he is.

Another theme is the balance between femininity and masculinity. This movie has very ying-yang approach to this topic. It finds softness and beauty in the otherwise brutal Muay Thai sport, but there is also strength and courage in femininity.  Toom/Parinya experiences the gradual shift in that balance. Toom becomes the ultimate boxer, but also tries to maintain his feminine side. However, this balance is not proportional, and it cannot be 50/50. So eventually he crashes, and has to choose on which side he actually wants to be. Only then he can have peace of mind.

I like how movie showed the cultural importance of Muay Thai in Thailand. It is not just bloody sport, or ancient martial arts, and it is not just entertainment. First of all it, is a symbol of masculinity. Moreover, it is a social sphere for boys from poor families to achieve something. In Toom’s school, they are taught for free, and the school makes money from real fights later. So boys are given a definite goal in their lives and do not “go astray.”

A few other notes: the movie also shows a huge contrast between Bangkok and the provincial life, just like in “Ong-Bak.” It seems to be an important topic in Thai film. And I liked how when Toom could not fight men in the ring anymore because of female hormones he was taking, his manager took him to Japan to fight women fighters there. It is funny how Japan seems to be a place where all the craziest things happen, like a fight between Thai ladyboy and a Japanese female wrestler. It’s like saying, “Yes we have some weird stuff going on here, but the weirdest is happening over there.”

All in all, the movie is very capturing. The actors perform very well, and Asanee Suwan does a great job portraying Toom/Parinya. I did not care much for the style of editing, but eventually I stopped noticing, because I liked the plot. Moreover, this film is based on true story, which makes “Beautiful Boxer” even more significant.