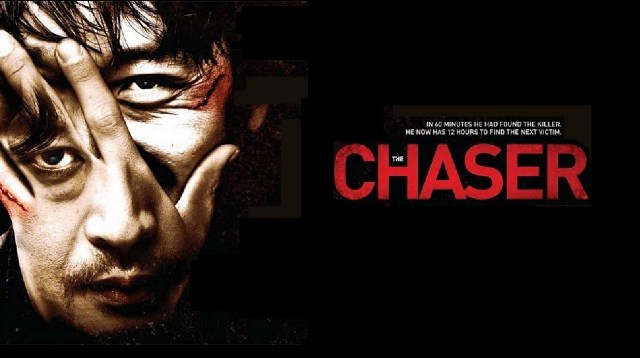 Since the great Sherlock Holmes, stories between The Detective and The Criminal have been played out in numerous ways in both literature and film. Creative authors play with conventions to surprise the audience. I remember scene from the movie “Hitchcock” where Alma excitingly suggests a devious break of the convention:

“You shouldn’t wait until half way through. Kill her after thirty minutes.”

More than 50 years of cinema has passed, but one thing that stays pretty much constant is that the victim is a woman. Korean film in particular thrives in this genre bringing some most creative and most violent movies and “The Chaser” is a great example of that.

Joong-ho (Yun-seok Kim) looks like a guy who has seen a lot in his life and is quite worn down by that. He runs a low class pimping business and isn’t very good at it as well. And… he is our protagonist. Joong-ho suspects that somebody is reselling his girls and being an ex-cop he starts pursuing a lead to figure out who is behind this. After realizing that he just sent one of his girls, Mi-jin (Yeong-hie Seo), to the suspect, he asks for her collaboration.

The suspect, Young-min, looks like an average young guy. Nothing significant, nothing special. But since the moment camera sets on him the actor Jung-woo Ha manages to get this uncomfortable creepy feeling about him. With support of great camera work, we can feel the same tension Mi-jin is feeling going into his house, all instincts saying to turn back. But it’s too late.

The (ex)Detective Joong-ho and The Criminal Young-min actually meet early in the film by an absurd coincidence. Joong-ho is still convinced that this guy is responsible for reselling his girls, so he chases him down and beats him up.  Then police takes them in – Young-min as a victim and Joong-ho as the suspect! But in the station when officer is questioning Young-min he eventually very casually admits actually killing the girls. At first police doesn’t believe him, and Young-min keeps saying confusing information. Moreover, officers are much more preoccupied with an incident where a random guy throws manure at the Seoul mayor. Joong-ho starts tracking the psychopaths life, becomes convinced that the guy is the killer. As Young-min mentioned that Mi-jin might still be alive, Joong-ho starts the chase (thus The Chaser) through dark and rainy Seoul to find the girl.

Bare, uncensored violence is a staple of contemporary Korean thriller and “The Chaser” is not an exception in this. In this film, however, violence depiction even borders level of mundane, as it looks more like a chore, a home errand for Young-min (in the creepy scene where he is wearing only underwear, unsuccessfully trying to put a chisel through Min-jin’s scull). This style makes the movie even more gruesome and chilling to watch.

“The Chaser” has very strong resemblance to “Memories of Murder”, though latter lets viewers have some relief through comedy, while former gets one feeling on the edge all throughout the film. The incompetent cop theme, mistrust of government, and the inability to solve a desperate situation are all there. Even the last part, where the power of good eventually is not able to destroy the power of bad in an eye-for-an-eye type of retribution is repeated. (I discuss the topic of revenge in Korean film more in “Oldboy” review) Therefore “The Chaser” has not really brought anything considerably new to the genre, nor it is as elaborately multi-layered as the predecessor “Memories of Murder”. Nonetheless, it is a great film in itself and a wonderful example of how a real hardcore thriller can be made without flashy explosions and other flair. Considering it is a first feature of director Na Hong-jin, it deserves a full five star rating.

The director, Na Hong-jin, knows exactly what he’s doing. Like Hitchcock, he gives the audience precisely enough information to be frustrated. Roger Ebert