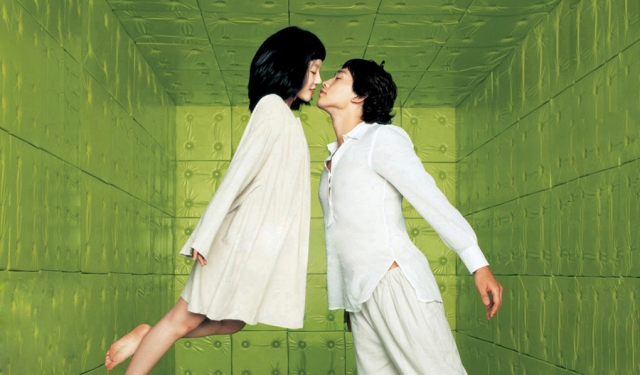 Despite what you might expect from the title of the film – it has nothing to do with cyberpunk or “Blade Runner”. As Park Chan-wook mentions in interviews (Interview 1, Interview 2), he wanted to create something “lighter” after “The Vengeance Trilogy.” He dedicated this movie to his twelve-year-old daughter, creating a film “that she could watch with her friends.” Though “I’m a Cyborg, but That’s OK” is really much lighter material than the vengeance trilogy, it is not even close to the usual teen flick. It is a very original and unexpected discussion of the important philosophical question about purpose of existence from an adolescent point of view.

Young-goon (Im Soo-jung) is very upset and disturbed when her mother puts her grandmother into a mental institution for imagining being a mouse. Young-goon herself starts to realize she is not a human, but a cyborg. At one point while working in a factory, she puts wires into her arm and electrocutes herself. She wants to recharge her cyborg batteries this way, but the outside world sees it as a suicide attempt, and her mother puts her into a mental institution too.  There she meets the extraordinary dwellers of the place – a mythomaniac woman who keeps creating stories to compensate for her memories; a man who is so polite he cannot turn his back on anyone; a girl who dreams only of getting into a yodeling choir; and Il-soon (Rain), an anti-social young man who is afraid he will disappear into a dot, and possesses the extraordinary ability to steal other peoples’ skills and qualities. However, Young-goon is not interested in them at all. She keeps talking to different machines in the hospital (disturbing detail – with her grandmother’s prosthetic teeth as a translator from human to machine), and she listens to radio broadcasts intended to train her as a cyborg. She is plots revenge against “white-coats,” the doctors who took her grandmother away, and only her “sin” of sympathy keeps her from taking it. She notices Il-soon, and asks him to steal away her sympathetic feelings so she can accomplish her cyborg mission. After he grants her wish, she goes on an imaginary rampage shooting many “white-coats,” then collapsing without energy.

While she thinks it is due to her battery being depleted, the doctors say her weak body is from her anorexia. Young-goon does not eat human food at all, trying to recharge herself solely by licking batteries. The doctors take desperate measures, and try to force-feed her. Only Il-soon understands her point of view and her rationalization of this problem. He plays along with her world rules, creating a gadget called the “rice-megatron” that can convert food into electricity, then “installs” it into her. To the joy of doctors and all hospital dwellers, Young-goong starts eating again, but she is still unsettled. In dreams, she keeps seeing her grandmother who wants to tell her what the purpose of her existence is. With Il-soon’s help, she deciphers the cryptic message, which is that she is actually a nuke bomb, set to destroy humanity. The only way to detonate her is with high electricity shock. The movie ends with Il-soon pretending to help her to get electrocuted by lighting, while having a picnic during a storm on a beach. We can only assume that a romance between them develops further.

Young-goon is fascinated by machines, as they have singular purposes of existence. In the turmoil of “finding yourself” during teen years (and not only teen years), it might look like a very tempting notion – there is no need to struggle, to make choices or to feel the consequences of these choices in life. Later in the film, we see that her being lost in life is mostly due to parental neglect. Young-goon’s mother is too busy with her restaurant to give attention to her daughter. This “note to society” about neglecting children is not emphasized, but it is there in a few of Park Chan-wook films (like “Sympathy for Mr. Vengeance”). Here we can see that a culture that cannot take care of their elderly, nor their young, is not sustainable. Lacking any guidance, Young-goon creates her own world to make sense of everything that is happening, and to control her surroundings.

Some reviewers described “I’m a Cyborg” as “Amelie in a mental institution” (Source: About Entertainment). Though Park Chan-wook’s world is much darker than “Amelie from Montmartre”, there are strong similarities. Both main characters try to override their harsh or boring realities that sometimes are so much out of their control with their own version. In Young-goon’s case, it goes too far, and she starts hurting herself. While in many other movies, mental institutions are portrayed in a rather demonic way, this one is not a case of “One Flew Over the Cuckoo’s Nest.” The doctors in this movie are very kind and supportive, and the main doctor acts more like a mother to Young-goon than her own ever did (though that does not stop the cyborg girl from shooting her in her imagination). Though they do struggle to understand patients, the movie implies that it takes being a bit crazy to understand the crazy.

Right after seeing the whole “Vengeance Trilogy,” it was very odd to see “I’m a Cyborg” knowing that it was made by the same director. However, there is still a lot of irony, vengeance (against the “white-coats”), and bloody violence (even if imaginary) – signature items of Park Chan-wook’s films. It has a Kafkesque feeling about it, like something from “The Metamorphosis.” As a result, it is not a typical flick you would show your twelve-year old, but that is exactly the reason I like this film.