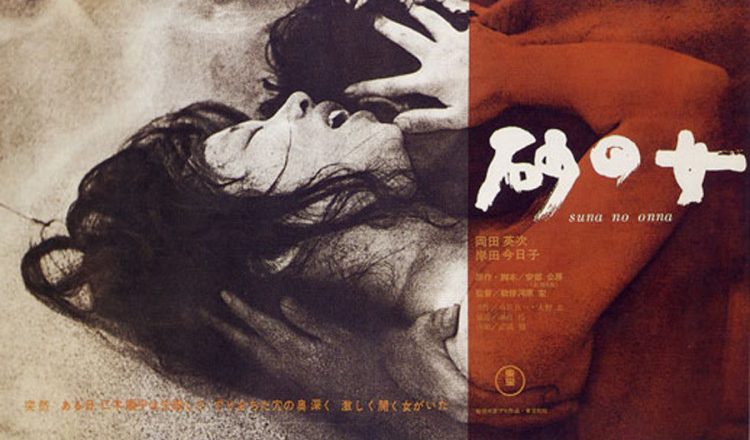 The Woman in the Dunes (砂の女)

“The Woman in the Dunes” on Amazon.

The Woman in the Dunes (砂の女), is a 1964 New Wave masterpiece by Hiroshi Teshigahara, based on a work by Nobel Prize nominated Japanese novelist Kōbō Abe, published two years earlier under the same name.

Hiroshi Teshigahara was a potter, calligrapher and a flower artist; but it is for his long collaboration with Kōbō Abe as an Academy Award-nominated film director that he will be forever remembered. Just as Abe and Teshigahara’s other co-productions—Pitfall (おとし穴) and The Face of Another (他人の顔) —Suna no Onna explores the reaction and behaviour of a character forced to withdraw from society, never to return.
Touching on themes earlier explored by Camus (L’Étranger, Le Mythe de Sisyphe), Kafka (The Metamorphosis), and as far back as Greek mythology (Sisyphus), the book follows an ill-fated journey of a Tokyo entomologist to the sand dunes of Tottori, only to find himself trapped in an ever-deepening pit with an absurdist Japanese widow as his only companion, unable to reconcile his innate thirst for physical freedom with the uncanny allure of life outside the equally-limiting traditional social order:

“The certificates we use to make certain of one another: contracts, licenses, ID cards, permits, deeds, certifications, registrations, carry permits, union cards, testimonials, bills, IOUs, temporary permits, letters of consent, income statements, certificates of custody, even proof of pedigree. Is that all of them? Have I forgotten any? Men and women are slaves to their fear of being cheated. In turn they dream up new certificates to prove their innocence.” — entomologist Niki Jumpei in Woman in the Dunes

Suna no Onna is undeniably one of those books whose adaptation to the silver screen complements them so well that they are best viewed as a single whole. Teshigahara has managed to translate faithfully every bit of the story—from the eerie, surrealist atmosphere, to existential, thought-provoking monologues, all the way to the gradually increasing sexual overtones.
Woman in the Dunes was met with universal acclaim, further reaffirming that the Golden Age of Japanese cinema wasn’t over just yet, and the film’s had equal success abroad snatching two Academy Award nominations and the Special Jury Prize at the 1964 Cannes Film Festival. Russian director Andrei Tarkovsky even mentioned Suna no Onna as one of his ten favourite movies, and it has most probably been an important influence on Solaris and Stalker, both exploring a very similar leitmotif.

“And what next? To return to Earth? Little by little everything will return to normal. I’ll find new interests, new acquaintances, but I won’t be able to devote all of myself to them.” — psychologist Kelvin in Solaris

The film spans a respectable 2h30, and the length of many a shot is worthy of countryman Yasujirō Ozu (Tokyo Story), but the photography is so mesmerizing you won’t want to blink through to the end. Each shot is thought-out meticulously to the last grain of sand, the actors are fully immersed into their turbulent roles, and every scene is matched perfectly with an ominous score by the great Toru Takemitsu (Pitfall, Ran, Black Rain).