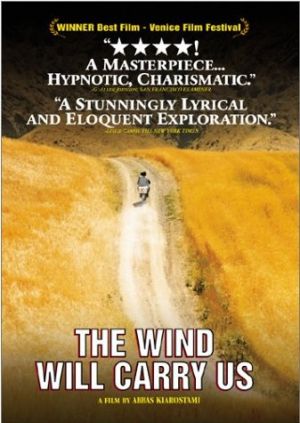 “Wind Will Carry Us” on Amazon.

Abbas Kiarostami is possibly the most internationally recognized Iranian filmmaker of his generation, a master of cinema who created some of Iran’s most memorable arthouse films. The Wind Will Carry Us is one of Kiarostami’s – and certainly one of Iran’s – classics, and a film that advances the whole art of filmmaking. The film’s beauty doesn’t reside in anything technical, rather it stands out for its poetics and metaphors. The film barely has a story, starting with a group of men trying to find a village in Iran’s countryside. When they arrive at the village, the protagonist (referred to only as ‘engineer’) does not reveal exactly why they have come.

Visually speaking, the opening shot is of a car driving somewhere in the countryside in Iran. The scenery is majestic and remains the focus for nearly three minutes allowing us to take in the beauty of the countryside. We never see who’s in the car, but we hear a group of men conversing and commenting on what they see. What we essentially witness here is a classic Kiarostami opening scene (many of his films start with a scene where the characters are in a car): very realistic and extremely crucial to establish the tone of the film.

Italian Neorealist films heavily influenced Kiarostami and he found a way to use that to his advantage. Understanding the story behind the making of the film helps the viewer better appreciate it. The Italian Neorealist techniques are prominent throughout this film: the use of non-professional actors (except for the protagonist), the camera movement as it wanders around curiously from scene to another, and finally the rejection of studio filmmaking. These three aspects seem to be directly derived from Italian Neorealism, but what is truly magnificent is the way the director incorporates them into his film in response to a certain percentage of censorship in Iranian cinema.

Realism is indeed the most important element in this film. In fact, Kiarostami is renowned for constantly exploring the realm of realism in many interesting ways, most prominently in his groundbreaking mockumentary, Close-up (1990). The Wind Will Carry Us was constructed in such a way that we view the characters as if we were amongst the villagers. The camera drifts away from the main character several times as if distracted by something else interesting in the village. This is undoubtedly one of many intriguing techniques employed by the director to create an anti-narrative.

Iranian cinema is dominated by minimalism, and this film is no exception. The simple, yet somehow complex, atmosphere of the film truly exemplifies the saying, “less is more”. As the engineer wanders through the poor mountain village, he encounters different people and experiences moments that are extremely metaphoric. The protagonist is the source of perspective in the film at certain moments, as if we are seeing the world through his eyes. This is a particularly important aspect of the film, as it allows the viewer to take in the beauty of the scenery. We also constantly see the ironic juxtaposition and contrast of the village visitors and the locals, and how they treat the environment. The engineer and his colleagues, for instance, are always restless and ignorant to the beautiful environment around them. The engineer is constantly hiking to higher ground and back for phone reception to keep in contact with his supervisors. This is an interesting way to show how highly dependent we are on technology and how it blinds us to the beauty of nature.

The Wind Will Carry Us is an exquisite piece of arthouse cinema and should not be missed. Iranian cinema is often overlooked; however, directors such as Abbas Kiarostami deserve to gain more recognition for constantly exploring more complex forms of filmmaking.