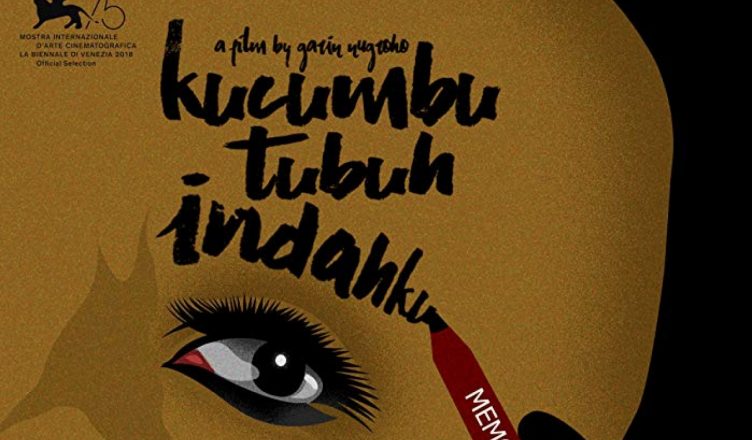 Our bodies are not really our own. They are defined by society, culture, tradition, mythology, politics – all of these forces interweaving and changing the meaning of the body through time. “Memories of My Body” examines this notion through a personal experience of a boy Juno who grows up to be a traditional dancer/performer in Indonesia.

The movie follows Juno through different episodes in his life, each marked by some kind of crisis related to the interpretation of body and sexuality. Each episode is intercut with a performance of traditional theatre play, setting up the next piece and narrated by dancer-actor Rianto on whose life the movie is based. The film is filled with tragic characters, each with their own struggles. From a muscular boxer who doesn’t want to be seen only as a macho emotionless muscle mountain, to a Communist official desires a young man going against the official party rhetoric he is pushing, all of the characters try to oppose of the rules and boundaries imposed by the society of their time and place. Juno ends up in the middle of these struggles, desired for his feminine physique and beautiful dancing, mostly powerless against the powers around him.

In the Indonesian islands before the colonial times, there were various traditions and understandings of gender. For example, the Bugis people in South Sulawesi recognized five genders.

The Dutch brought their own understanding of gender, the more simplistic “male” and “female” tradition. They prohibited homosexual relationships without regard of the much more fluid interpretation of gender that many of the locals had (and I say “many of the locals”, as Indonesia was never a unified entity before and there was a plethora of cultures and traditions spread through the islands).

The gender-fluid understandings are carried within the traditional dance. For example, Reog Ponorogo dance depicts intimate relationships between two characters, warok and gemblak.

The main male dancer, or warok, must follow strict physical and spiritual rules and rituals. Under these rules, a warok was prohibited from engaging in a sexual relationship with a woman. But he was allowed to have intimate relationships with young boys’ characters, or gemblak, in the performance. Although warok and gemblak were engaged in same-sex acts, they did not identify themselves as homosexuals.

These traditions had to face and endure the different ideas brought by the colonialists, then Islam, and Communism. These days, women often play the gemblak character, the tradition morphing to reflect modern interpretations. But could the traditional viewpoint (and the beautiful dance performance) become an inspiration for the West where a new wave of people are looking for something more than a binary understanding of genders?

“Memories of My Body” is a beautiful, contemplative movie, that does not provide any particular plot or conclusions for the issues it’s analyzing. This movie will be enjoyed by those who don’t mind slow-paced movies that do not adhere to the three-act structure. The movie is a blend of cinema and traditional performance providing something different from either of the mediums.