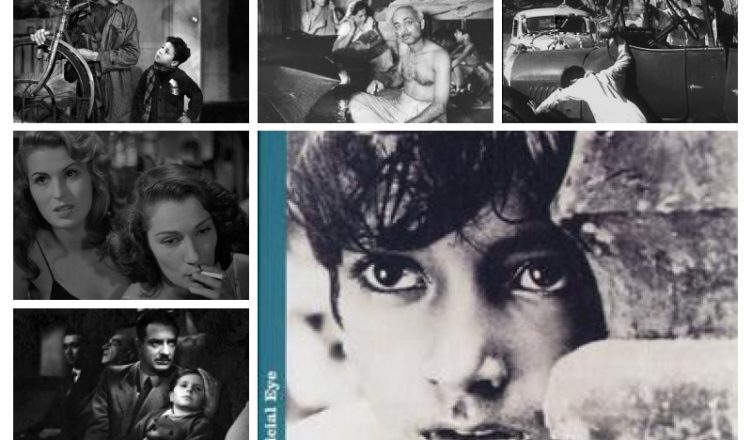 Bio of the guest author of this essay: Priya is an Italian-Indian writer at The Indian Rose, a website aimed at presenting Indian culture to the world. She blogs about Ayurveda, South Asian cinema, and fashion. She is interested in discovering and sharing aspects of the ancient Indian philosophy and way of life that can be relevant in today’s world.

That’s an oversimplification that has been accepted for far too long. While Italian neorealism surely had an influence on the emergence of Indian parallel cinema, it is inaccurate to see Indian realism solely as a “Western” movie style – Indian cultural heritage also had a great impact on its development. Moreover, the relationship between Italian and Indian realism is more intricate than just Ray being inspired by De Sica. The foundations of it lie in certain artistic, historical and socio-political circumstances which, believe it or not, India and Italy had in common at the time.

When neorealism emerged as a dominant style, Italy had just come out of World War II, and it was one of the poorest countries in Western Europe. Most of its population, especially in the Centre and the South, was uneducated and struggled to make a living. When the economy started booming in the 1950s, many were left behind, and shanty towns existed in all major Italian cities, as documented in the realist masterwork Ugly, Dirty and Bad (1976) by Ettore Scola.

India, especially the State of West Bengal, on the other hand, had just experienced Partition and its violent outcome. Just like in Italy, the population was largely poor and uneducated, the majority of people had to make do as they could, and life revolved around making a living.

Traumatic experiences surely left a mark, but both countries were also entering a new and exciting political and economic era and were looking at democracy and liberal economy with hope. Many Italian and Indian intellectuals, however, had mixed feelings regarding modernisation, as it has been beautifully expressed by the enchanted look of the two children who see a train for the first time in Pather Panchali (Satyajit Ray, 1955). In a time when economic development, industrialisation, and democracy were advertised as the cure-all solution, Italian and Indian art movie directors found realism to the perfect language to challenge the dominant rhetoric.  Similarly, realism was capable of accurately portraying the social divides prevalent in India and in Italy. Both countries had witnessed traumatic factionalism that made neighbours fight one another – fascists vs. anti-fascists and India vs. Pakistan. In both societies, there was also a deep economic and social divide among classes, expressed on the screen through the recurring themes of redemption, justice/injustice, and class relations.

Given the similar economic and social environment, perhaps it would be more accurate to say that Indian artists shared similar preoccupations to those of their Italian counterparts, rather than to label them as a by-product of Italian neorealism. Of course, there was admiration, but the emergence of realism in countries such as India, Egypt and Argentina was also the result of Third World intellectuals’ determination to portray everyday life in contexts in which poverty was widespread in an accurate, yet sensitive way.

Another key factor for the emergence of realist cinema both in Italy and in India was the intellectuals’ frustration with commercial cinema. Italian cinema of the 30s and 40s was largely dominated by the so-called “white telephone movies”: intricate love stories revolving around carefree bourgeois men and women dressed in elegant clothes. They showed an idyllic reality that served to escape the actual dramatic everyday life, just like Bollywood. As a result, in both countries, politically and socially active movie directors felt it was important to finally put real life and the common man on centre stage.

Therefore, a similar economic, political, social, and artistic background partly accounts for the emergence of realism in various countries across the globe, but let’s not overlook the specifically Indian elements that left a mark on Indian parallel cinema. It has been often stated that Satyajit Ray is the “least Indian” of Indian filmmakers and that his style is more reminiscent of European directors than Indian ones. The reality, however, is that Ray – as well as other parallel cinema movie makers – was very much a product of the Indian, particularly Bengali, cultural heritage.

Realism in Indian visual arts has a long and rich history that dates back way before the release of Bicycle Thieves (Vittorio De Sica) in 1948. It was a dominant filmmaking style in the 1920s and 1930s (Baburao Painter’s 1925 movie Savkari Pash is considered the first Indian realist movie). Although realism became less popular in the 1940s due to the emergence of musical melodrama, it still made the occasional appearance.

Pioneer realist movie-makers included Ramabrahmam from Andhra Pradesh, Khwaja Ahmad Abbas from Punjab, and Gyan Mukherjee from Bengal. One of the earliest examples of Indian socio-realism is Mukherjee’s movie Kismet (1943), which tells the story of a pickpocket, a theatre owner, and his daughter who struggle to survive all kinds of social injustices. These early works preceded Italian neorealism by a few years and provided a tremendous source of inspiration for parallel cinema exponents.

Indian parallel cinema, moreover, borrowed many of its stories from Indian literature, particularly from the works of Bibhutibhushan Bandyopadhyay and Rabindranath Tagore. Satyiajit Ray himself adapted a number of literary works for the silver screen. The plots of those novels (and their cinematic adaptations) were indeed similar to those of Italian neorealism, but they weren’t imitations. They were first and foremost related to the themes that Indian intellectuals held dear, and that were widely discussed in the intellectual circles of India at that time.

Another often overlooked influence on Indian parallel cinema is Indian theatre, particularly the Indian People’s Theatre Association (IPTA) of the 1940s, of which Ritwik Ghatak (a prominent realist movie maker) was a member. The association, related to the socialist ideals that were gaining popularity in Bengal, organised theatre shows that drew inspiration from Indian folk art as well as political theatre. The IPTA had a deep impact on both the style and the content of Indian parallel cinema.

Let’s also not forget that the admiration between Italian neorealists and Indian parallel cinema exponents was reciprocal. Indian masterpieces were regularly presented at major festivals across Europe since the release of internationally acclaimed Neecha Nagar by Chetan Anand in 1946. Rossellini and other neorealists admired the works of Indian directors such as Satyajit Ray, Bimal Roy and Ritwik Ghatak. Thanks to them, Italian intellectuals realised that there was cinematic life beyond Europe and the United States.

Rossellini and other Italian left-wing intellectuals were not only fascinated by Indian movies, but also by India’s ruling class’s view on industrialisation, land reform, and democracy. For them, Nehru’s India was a stage where socialism met democracy, and where poverty was dealt with without depriving citizens of their freedoms.

What’s more, Italian movie-makers were charmed by Indian politicians’ interest in, and support for realist cinema. Portraying widespread poverty and injustice was no easy task in post-war Italy, where progress, Americanization and consumerism were being presented as the absolute good. While in India realist movies enjoyed political approval and financial backing, Italian neorealists witnessed some degree of censorship.

Italian intellectuals wanted to know India, its refined cinema, and its “enlightened” ruling class better. Rossellini was indeed invited to visit India by Nehru, Prime Minister at the time. The outcome of his trip was a movie, India: Matri Bhumi (1959), and a TV documentary, India as Seen by Rossellini (1959). In both films he followed the footprints of Indian parallel cinema: he stayed away from exoticism and the glorification of poverty, but he didn’t try to hide the challenges facing Indians either.

A few years later, in 1960, another Italian realist writer and movie maker was deeply impacted by India and its artistic production. Pier Paolo Pasolini went to India to witness what it meant to be working-class in a Third World country. Like Satyajit Ray and Bimal Roy, he found poetry in simple life; like Mrinal Sen, he saw society in terms of class struggle. The admiration between Italian and Indian intellectuals was, simply put, reciprocal.

In conclusion, while it is undeniable that Italian neorealism influenced Indian parallel cinema, it is time we reconsider the relationship between the two cinematic traditions. It is too simplistic to say that Italy provided Indian movie makers with a cinematic style. The nearly contemporary appearance of realism in the two countries was triggered by similar artistic, political and economic conditions. Moreover, Indian parallel cinema owes also a lot to Bengali theatre, literature, and earlier movies. Over the years, Italian neorealism and Indian parallel cinema have mutually enriched one another through a productive interaction between the best movie makers Italy and India ever had.

Italian neorealism is a cinematic movement that emerged in Italy after the end of World War II. The recurring theme in neorealist films is common people’s struggle to survive in a context of poverty and injustice. Its main characteristics are outdoor shooting – in the street or countryside – and use of non-professional actors. Neorealist movie makers were often politically and socially active and believed cinema was a powerful means to raise awareness about the dramatic everyday life in post-war Italy. Despite worldwide appreciation, Italian neorealism suffered from some degree of censorship by the Italian government, which favoured lighter escapist movies. Due to lack of funding and political backing, Italian neorealism virtually disappeared in the 1960s.

The term “Indian parallel cinema” is used to describe Indian movies that move away from the format of Bollywood commercial cinema, are filmed in the documentary-style typical of realism, and focus on political and social issues. The main characters are often rural or working-class people, and the movies hardly ever contain dance scenes. The origin of Indian parallel cinema is often traced back to 1950s West Bengal. European cinema – particularly Italian neorealism – is considered its most important source of inspiration. Nevertheless, realist “parallel” movies have been produced in India since the 1930s. Indian Parallel Cinema flourished between the 1950s and the 1970s when it enjoyed political and financial backing and worldwide appreciation. Later it became more widely known as the Indian New Wave, a style that still lives to this day.